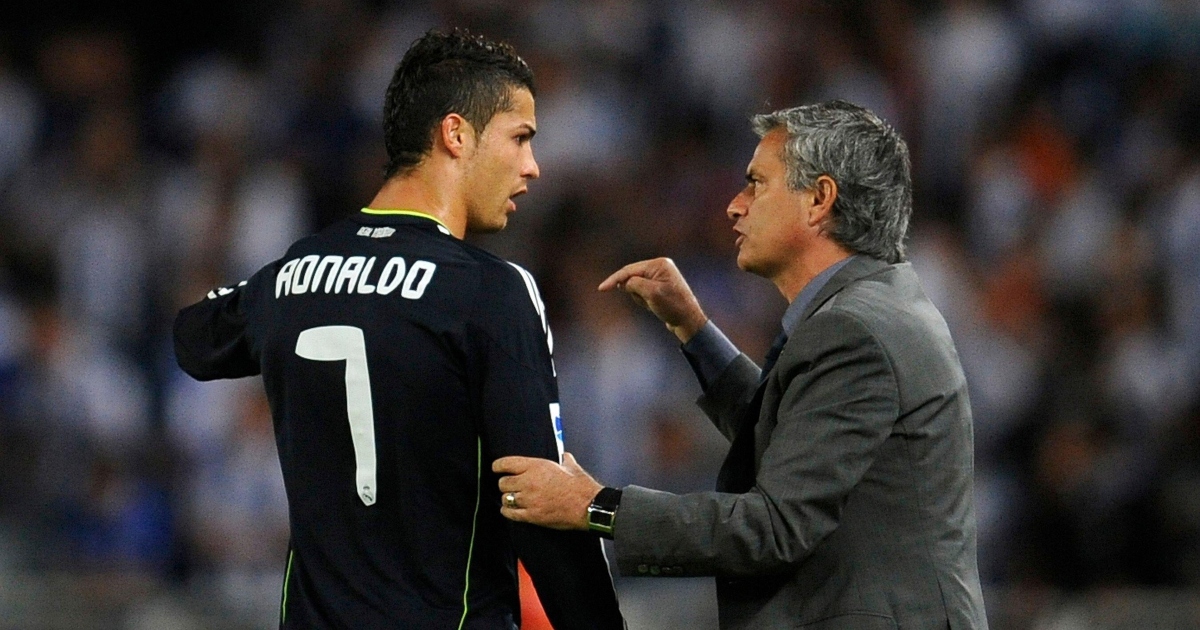 During his time in charge of Porto, Chelsea, Real Madrid, Inter, Manchester United, Tottenham and Roma, Jose Mourinho has been renowned for his mind games.

Mourinho isn’t afraid to criticise a player to the press if he feels it will inspire a reaction from them, but he’ll also say it to their face.

We’ve taken a look at 15 times where the manager directly criticised or confronted his own players.

Mourinho’s first victim, Baia was suspended by Porto for disciplinary reasons following a reported training ground row with the manager.

“When he arrived at Porto he wanted to show everyone who was the boss: friends off the pitch, players on it,” Baia told the Guardian.

“Performance was what counted, not relationships, so I was not in the best form and was chosen as an example: I was his statement. I was not pleased at the time.”

While Carvalho played under Mourinho at three different clubs, the duo still had their fair share of arguments over the years.

“Jose was the best at putting a player down,” former Chelsea winger Joe Cole said on the Peter Crouch Podcast. “Ricky Carvalho, obviously a great player, he had a row with Jose about something.

“And after the game he didn’t play and Jose says, ‘You will never play again for me, you will never play! John Terry, number one, William Gallas, number two, Robert Huth, number three. Young kid, number four’…. And he went, ‘Kit man Mick, I play Mick ahead of you!’

Despite helping Chelsea beat Birmingham City 2-0 in December 2005, Cole felt Mourinho’s wrath after messing up a great opportunity to make it 3-0.

“I remember playing a game, I went through on goal and [Hernan] Crespo was there,” Cole told JOE. “I should have just put in myself.

“But I’ve tried to do the no eyes one to Crespo for him to tap it in. We won the game 2-0, [it had] no bearing on the game whatsoever.

“The next day we’re warming down. I’d had a good game so you’re feeling good and he just come over to me and said, ‘You fucking bastard. You’ll never play for me ever again.’

After losing a Champions League last-16 first-leg against Barcelona in February 2005, Mourinho was ruthless in the dressing room.

“He always used to dig me out and he used to dig a few of the others out,” Joe Cole told Jamie Carragher’s The Greatest Game podcast. “He had us in after we got beaten at the Nou Camp and he sat down and went through us one by one.

“[He said]: ‘You think you’re a top player? You froze at the Nou Camp you. You showed no balls. You’re a French international, you’re supposed to be good.’

“He went through and he absolutely crucified everyone.”

During his time at Real Madrid, Mourinho was furious after the media learned of his plans to play Pepe in midfield against Barcelona.

“Mourinho entered the dressing room with a sullen look on his face,” Jerzy Dudek wrote in his book. “He asked us how the press knew that Pepe was going to play in midfield, if it was something known only behind closed doors.

“He said the leak harmed us all – the club and us, the players. ‘Where is the rat? Is it you, Granero?’ Jose said, pointing to Esteban.

“He insisted several times that there was a ‘rat’ in the dressing room and wouldn’t stop until he found out who it was. Then he slammed the door and left. That episode was the source of all the conflicts that occurred later.”

Casillas, who has a journalist girlfriend in Sara Carbonero, then became the chief suspect.

“He accused me of being a friend of the press,” Casillas said in a Movistar+ documentary. “I know people in the press, how could I not know them? But, it’s another thing to filter information.

“People were talking about me, but I kept quiet, I didn’t respond and I accepted that I was being seen as the mole.”

Mourinho was also said to be furious when the Madrid goalkeeper spoke to Barcelona’s Xavi and tried to defuse tensions between the two clubs.

After Madrid were beaten 2-1 at home by Barcelona in the Copa Del Rey in January 2012, Ramos and Mourinho exchanged heated words during the next training session.

According to Marca, the conversation started with Mourinho turning towards Ramos and saying: “You [plural] killed me in the mixed zone.”

To which Ramos replied: “No, mister, you only read what it says in the papers not everything we said.”

Mourinho said: “Sure because you Spaniards have been world champions and your friends in the media protect you… and because the goalkeeper…”

At that point there was a shout from Casillas, training 30 metres away: “Eh, mister, round here you say things to our faces, eh!”

Another part of the conversation starts with Mourinho saying: “Where were you on the first goal [against Barcelona], Sergio?”

“Well, you should have been marking Puyol,” Mourinho said in response.

Despite being compatriots, Mourinho and Ronaldo didn’t always see eye to eye and mediation from their mutual agent Jorge Mendes was reportedly required on several occasions.

The duo clashed after Madrid’s 2-0 Copa del Rey win against Valencia in January 2013, when the manager had expressed his anger at the player not tracking back.

“I was surprised by Mourinho’s reaction. We were winning 2-0 in the Copa del Rey,” Luka Modric said in his autobiography. “Ronaldo did not chase the rivals on his throw-in and Jose was furious with Cristiano.

“The two fought for a long time on the field. After returning to the locker room at half-time, I saw Ronaldo desperate, on the verge of tears. He said, ‘I do my best and he continues to criticise me.’

“Mourinho came in and began to criticise the Portuguese for his responsibility during the game. They became so hot that only the intervention of the team-mates avoided a real fight between them.”

Ozil thrived under Mourinho at Real Madrid, but the manager once tore into him at half-time of a La Liga clash with Deportivo due to a perceived lack of effort.

The midfielder writes in his autobiography that Mourinho said: “You think two beautiful passes are enough. You think you’re so good that 50% is enough.”

Ozil continues: “He pauses. Stares at me with his dark brown eyes. I stare back. Like two boxers at the stare-down before the first round. He shows no emotion. Just waits for a response from me. How much I hate him right now. And I love Mourinho actually.”

After Ozil threw his shirt on the floor, Mourinho’s tirade continued: ‘Oh, are you giving up now? You’re such a coward. What do you want? To creep under the beautiful, warm shower? Shampoo your hair? To be alone? Or do you want to prove to your fellow players, the fans out there, and me, what you can do.’

Ozil was then replaced by Kaka and Ramos took the German’s shirt before wearing it underneath his own during the second half.

Photo: Ramos wearing Ozil’s shirt under his during the second half vs Depor pic.twitter.com/nVqzMCK7

Despite being one of Mourinho’s first signings at Madrid, Leon failed to impress the manager and made just 14 appearances for the club.

“We were drawing 0-0 in a game and Mourinho told Pedro Leon to warm up, but he just stood around by the corner flag,” Dudek said.

“I was sitting close to Mourinho and saw his reaction. He was furious: ‘Look at his lack of effort! And then he gets offended when he doesn’t play!’

“The next day we were training ahead of the Auxerre match. Pedro Leon thought he was going to play but Mourinho called us together in the centre circle and said to him: ‘I’m sorry, but you’re not interested in playing for Real Madrid. Others would give their lives for this shirt, but not you.’

“He looked at Pedro and told him to watch the game at home because he needed players who would die for the team.

He told him: ‘You are unprofessional. You think you’re cheating me? No. You’re cheating your team-mates. I saw your warm-up. You couldn’t care less about it, but I put you on.

“‘Do you care about playing for Real Madrid? Everyone has their five minutes here. You’ve had yours.’”

According to journalist Sid Lowe, Mourinho also told Leon that even if the team plane crashed without him on it and he was the only man available, he still would not play the next game. Wow.

Mourinho took issue with a lack of movement from Costa during the opening 45 minutes of Chelsea’s Champions League win over Maccabi Tel Aviv in 2015.

He was seen screaming wildly at his striker and they appeared to be engaged in an angry exchange of views as they headed towards the tunnel at the interval.

Unlike other examples on this list, the row didn’t last very long as the pair patched things up in the dressing room and Costa remained on the pitch for the second half.

“I reacted. He did too,” Mourinho told a news conference. “At half-time in the dressing room, a few kisses and a few cuddles. No problem.”

Maybe Mourinho was a changed man. Or maybe not…

Mourinho had a very turbulent relationship with Pogba and launched an attack on the midfielder following Manchester United’s 2-2 draw with Southampton in December 2018.

An Old Trafford source told The Sun: “Jose called Pogba a virus in front of all the players. He told him ‘you are like a person with the flu or a virus in a closed room – you pass that virus to the others.’

“He also told him ‘you don’t play, you don’t respect players and supporters and you kill the mentality of good, honest people around you.’”

Gomes was handed his senior debut by Mourinho in 2017 and became United’s youngster player since Duncan Edwards. But the manager once slammed him for his performance in an Under-21 game in front of senior team-mates

“We were at the dinner table and he’s come around speaking to everyone,” Gomes told Sport Bible. “He then looks at me and says, ‘I am fucked with you!’

“He was saying, ‘You were doing this and doing that but you should have done this and that…’ And this was in front of the whole squad as well. I’d had bollockings in my time but not from the big boss. I just wasn’t expecting it. I was taken aback.

“He eventually finished shouting and carried on with what he was doing. I was stuck to my seat. Eventually some of the lads came over and said, ‘don’t worry, just ignore him. He’s trying to get a reaction from you. This is how he is.’

“I was only young so in my head I was thinking, ‘Fuck, he hates me.’ I went back to my room and rang my dad. I was nearly crying.”

Mkhitaryan failed to live up to expectations at United and Mourinho blamed the midfielder for the criticism he received at Old Trafford.

“Once Mourinho saw me at breakfast and said to me: ‘Because of you, the press criticises me,’” Mkhitaryan told Forza Roma.

According to Il Corriere dello Sport, Mourinho was furious with Roma players after their 2-0 loss against Inter in February 2022.

“I want to know why you’ve become so small against big teams for the last two years. If we are small, referees will treat us as such. Inter are a super team, but rather than find motivation, you shit yourself.

“The worse shortcoming for a man is lack of balls and personality. Are you scared about big games? Then go to play in Serie C, without pressure, without champions, and big stadiums. You are without balls and that’s the worse thing for a man.”

Can you name Mourinho’s 35 most-used players throughout his career?