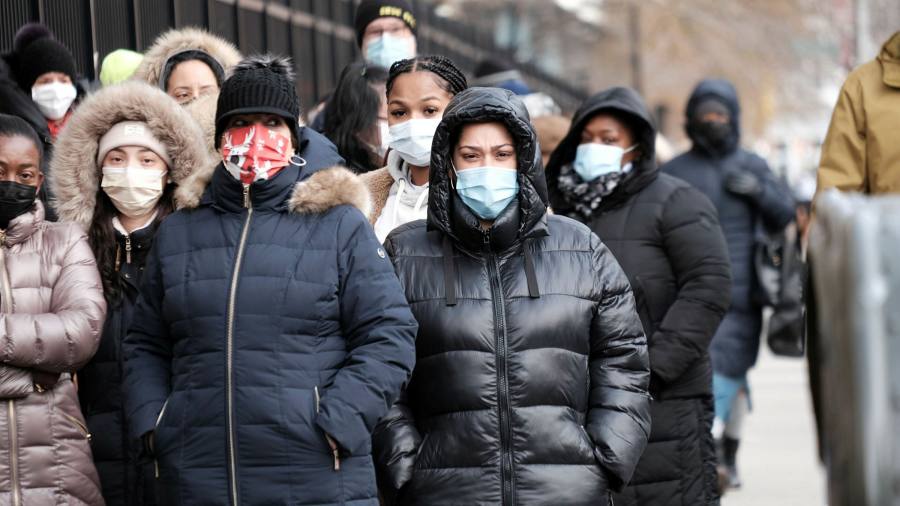 Joe Biden has acknowledged that he should have pushed for a bigger national programme to distribute free rapid Covid-19 tests earlier, as the US testing supply crunch worsens just before Christmas.

The US president announced this week that the federal government would buy 500m at-home tests and send them through the post, starting in January.

But he admitted on Wednesday night that he wished he had issued that order months earlier, as cities at the centre of the Omicron outbreak, including New York and Washington, DC, experience long queues for tests.

“I don’t think it’s a failure. You could argue that we should have known a year ago, six months ago, two months ago, a month ago,” Biden told ABC news. “I wish I had thought about ordering [the tests] two months ago.”

Covid-19 tests are in short supply across the US, as Omicron cases spike and people look to get results before travelling for the holidays. While the White House has promised hundreds of millions more tests, it has not yet signed the contract to purchase them and no deliveries will be made until next month.

Meanwhile CVS and Walgreens, the country’s two biggest pharmacy chains, have imposed limits on how many at-home tests customers can buy; many shops have simply run out altogether.

Abbott Laboratories, one of the biggest manufacturers of at-home tests, said it was seeing “unprecedented demand” for its kits.

Queues have built outside local government-run testing sites. Washington began offering free rapid tests on Wednesday from public libraries, which were immediately surrounded by long queues of residents. Some told the Financial Times they had been waiting in line for several hours to pick up a test kit.

US cases continue to climb rapidly, with the average daily infection rate having risen to over 160,000 — more than double what it was just a month ago.

But Biden insisted on Wednesday night the country was in a better position than it had been during last winter’s peak.

“When last Christmas, we were in a situation where we had significantly fewer people vaccinated, emergency rooms were filled,” he told ABC. “You had serious backups in hospitals that were causing great difficulties.

“We’re in a situation now where we have 200m people fully vaccinated,” he added.

Dr Leana Wen, a public health professor at George Washington University, said: “The Biden administration’s strategy has been reactive, rather than proactive. It’s simply not true to say that no one saw Delta and Omicron coming — virtually every public health expert did, and many of us have been saying for more than a year now that we need to have far more testing.

“Omicron is almost certainly not the last concerning variant the world will see, and President Biden needs to do a lot more to compel the unvaccinated and to prepare for how the vaccinated can live with Covid, which requires ubiquitous, widespread, and freely available testing.”