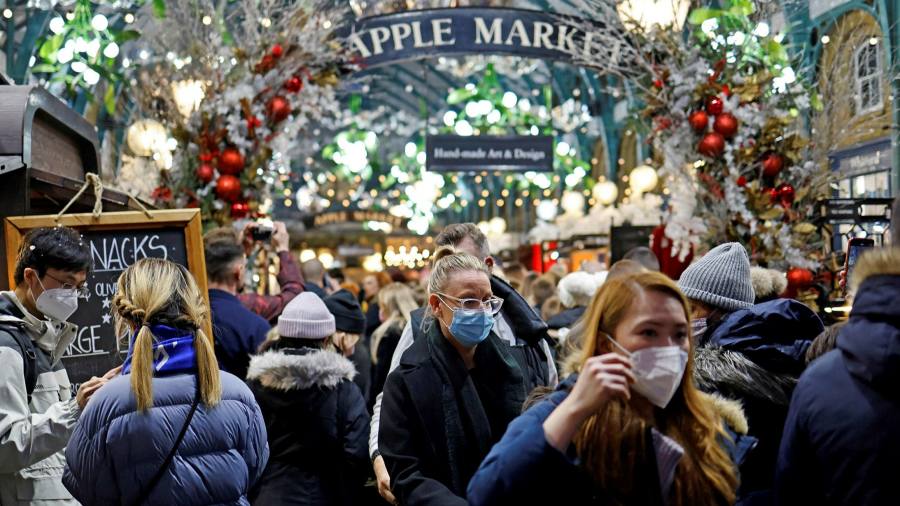 Boris Johnson announced on Tuesday that he would not introduce any further coronavirus restrictions in England before Christmas, but warned that additional measures could be necessary next week.

Following a major cabinet backlash this week, the UK prime minister abandoned proposals for immediate “circuit breaker” restrictions on indoor gatherings while ministers await more data on the severity of the Omicron variant.

The UK recorded 90,629 new Covid-19 cases on Tuesday, up 52 per cent on the same day last week. However, the growth rate appears to have slowed slightly, falling from a December 16 high of nearly 75 per cent week on week.

Speaking from Downing Street, Johnson warned that Omicron was continuing to spread “with a speed unlike anything we’ve seen before” and the UK’s situation remained “extremely difficult”. But he said further restrictions were not required immediately.

“In view of the continuing uncertainty about several things — the severity of Omicron, uncertainty about the hospitalisation rate or the impact of the vaccine rollout or the boosters — we don’t think today that there is enough evidence to justify any tougher measures before Christmas,” he said.

But the prime minister cautioned that he was “ready to take action” if the situation deteriorates. “Naturally, we can’t rule out any further measures after Christmas and we’re going to keep a constant eye on the data and we’ll do whatever it takes to protect public health.”

Johnson’s decision not to roll out further restrictions was in part because of objections from the majority of cabinet ministers. Liz Truss, foreign secretary, was among those who said at Monday’s cabinet that there had to be “incontrovertible” data to justify new restrictions.

The government is awaiting the latest analysis on the severity of the Omicron wave from researchers at Imperial College London, expected as soon as Wednesday.

In London, the first UK region to be hit by the Omicron surge, Covid-19 hospitalisations have jumped to their highest level since February 8, with 245 patients admitted to hospital in the latest 24-hour period.

Weekly hospital admissions in London were up 41 per cent as of December 19, but early data suggest this may be driven by more patients incidentally testing positive upon admission rather than being treated directly for Covid-19.

The prime minister urged caution over the holiday period and stated that guidance should still be followed on wearing masks indoors, keeping rooms ventilated and taking tests before visiting vulnerable or elderly relatives.

“What this means is that people can go ahead with their Christmas plans, but the situation remains finely balanced and I would urge everyone to exercise caution, to keep protecting yourselves and your loved ones, especially the vulnerable,” he added.

The self-isolation period after a positive Covid test for double-vaccinated people in England was cut on Wednesday to just seven days, in a bid to ease staffing pressures for businesses and public services hit by a wave of coronavirus-related absences.

Sajid Javid, UK health secretary, said the guidance “will help break chains of transmission and minimise the impact on lives and livelihoods”, noting that Omicron’s rapid spread “may pose a risk to running our critical public services during winter”. 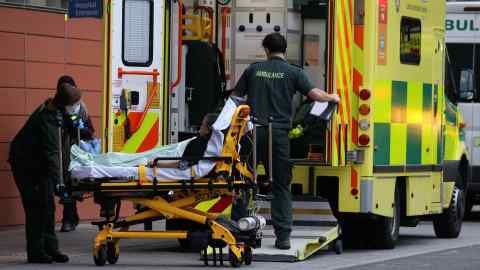 One MP said: “Whitty said that they were obviously looking ahead to January and that could be the key crunch point”. Another added: “The advisers were very straight with us in saying that there are lots of unknowns about the disease at the moment . . . which is obviously why the government is having such a hard time trying to strike the right balance”.

In Scotland, first minister Nicola Sturgeon announced that for three weeks from December 26, the Scottish government planned to limit indoor events to 100 people standing or 200 seated, and outdoor events to a maximum of 500.

“This will, of course, make sports matches, including football, effectively spectator-free,” Sturgeon said. “It will also mean unfortunately that large-scale Hogmanay celebrations, including [those] planned here in our capital city, will not proceed.”

Health leaders in England warned that the decision to delay restrictions would contribute to hospital pressures.

“It remains a question of when, rather than if, further restrictions will be brought in to curb the rapid spread of Omicron,” said Matthew Taylor, chief executive of the NHS Confederation, which represents organisations across the healthcare sector. He added that the NHS was facing a “dangerous situation in which rising patient numbers coincide with rising numbers of NHS staff off sick”.