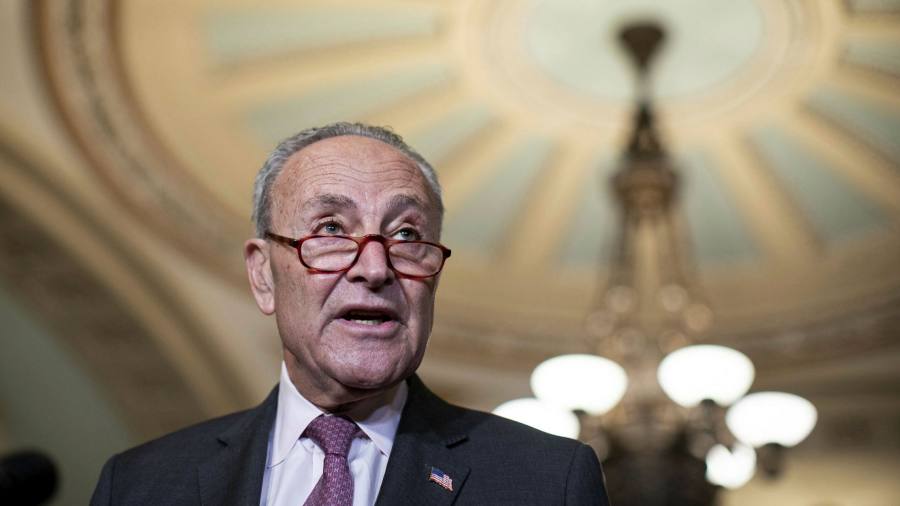 Chuck Schumer, the Democratic leader in the Senate, will call a vote on a long-awaited $52bn package of subsidies to US chipmakers as soon as Tuesday as he tries to put pressure on others in Congress to back it.

Democratic aides have told the Financial Times Schumer is planning the move on approving the money to fund the Creating Helpful Incentives to Produce Semiconductors (Chips) Act after deciding to drop a range of other measures designed to tackle growing Chinese technological power.

A draft of the bill being circulated around Congress on Monday also included elements of a separate bill, known as the Fabs Act, which offers tax credits to build chipmaking plants, and $1.5bn for funding 5G networks.

Senior members of Congress hope this would give the US chipmaking industry the impetus to push ahead with hundreds of billions of dollars of investment in manufacturing over the next few years. But some are also braced for a fight over the exact funding terms as Congress tries to limit how much can go to companies with big investments in China.

One Senate aide said: “Majority leader Schumer is expected to set up a floor vote as early as Tuesday to begin the process to move forward a limited competition bill that would include — at a minimum — the emergency funding for Chips and the investment tax credit from the Fabs Act.”

The person added: “Additional pieces of the competition bill may be included.”

Microchips have become one of the biggest bottlenecks in international supply chains, with more than half of them coming from Taiwan Semiconductor Manufacturing Corporation.

The Biden administration and senior members of Congress have been pushing for more than a year to pass subsidies for the domestic chipmaking industry, as officials warn that global supplies will be hit hard if China attacks Taiwan. Congress passed a bill to do so in 2020, but has yet to approve funding.

Congressional leaders had hoped to authorise that funding as part of a wider $250bn bill known as the United States Innovation and Competition Act, which would have supported technologies as diverse as 5G and quantum computing.

But Mitch McConnell, the Republican leader in the Senate, put that effort in doubt when he suggested he would block the bill, aimed at countering Chinese technological and economic advancements, if Democrats pushed ahead with separate more partisan economic legislation.

Since then Schumer and others have been working on a drastically slimmed-down version incorporating only the $52bn worth of chip subsidies and $1.5bn in 5G funding.

Schumer has teamed up with Nancy Pelosi, the Democratic speaker of the House of Representatives, and officials said that whatever text is passed by the Senate would also be likely to secure support in the lower chamber.

Most industry players are relieved that Congress appears to be moving closer to approving the funding. But some companies, including Intel, are worried about conditions in the legislation that limit what manufacturers can make in China if they obtain federal funding.

The Senate bill would bar companies that receive Chips funding from producing semiconductors smaller than 28nm in China. Many companies use chips smaller than this in technology such as smartphones and tablets. One industry official said companies believed the pace of technological change meant 28nm would make much less sense as the threshold in a few years. He said a better approach would be to include language that adjusted the threshold to recognise the speed of generational change for chips.

But another person familiar with the discussions said it would send the wrong signal about US efforts to slow China’s ability to develop an advanced domestic semiconductor industry.

“Not surprisingly, there are [a] number of companies that either have existing [fabrication plants] or envision new fabs in China that would like to see less stringent guardrails,” said the person.

“Given that we are talking about helping to prevent China scale and ascend the learning curve in chips manufacturing, it would be quite something to see Congress water down or moderate the proposal,” they added.