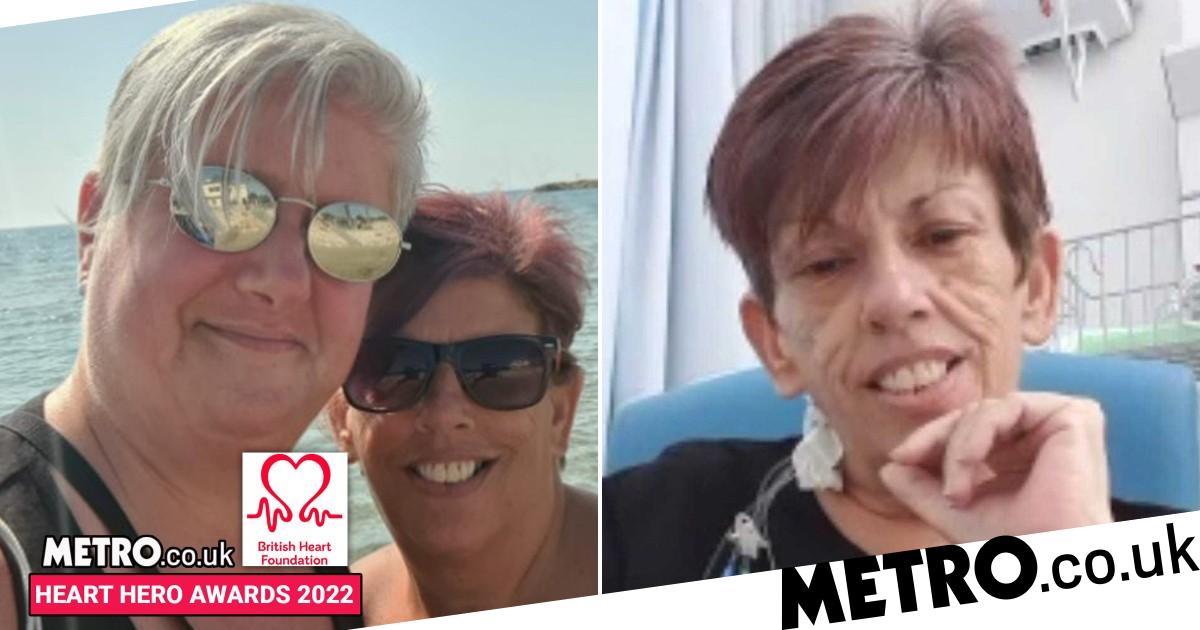 For the last decade, Nicki Evans has been used to being the carer for her partner Lisa Hoddinott.

But one day Nicki, 56, was the person whose life had to be saved in a shocking turn of events.

Lisa, 51, told Metro.co.uk about what happened on April 14, 2020 – the day she was forced to take Nicki’s life quite literally into her hands.

And her story today comes exactly a year after Denmark footballer Christian Eriksen suffered – and survived – a cardiac arrest on the pitch while playing in the Euro 2020 championships.

‘My recollection of that night is that we’d had dinner and I went and did the dishes,’ said Lisa, who has been with Nicki for 15 years.

‘As I came back into the living room Nicki mumbled something and then she just put her hand to her head and flopped back on the sofa. I went dashing over to her and was on my knees in front of her and she was making a horrendous gurgling noise.

‘I just kept calling her name and there was no response apart from that awful noise.

‘I knew something was terribly wrong so I slapped her across the face to see if I could get any reaction and there was none.’

Lisa shouted to Nicki she was going to phone the ambulance and immediately dialled 999, then told them something was ‘very wrong’ but she ‘didn’t know what’.

After getting Lisa to check Nicki’s breathing, the call handler told Lisa to get her partner onto the floor and start CPR quickly.

‘I just grabbed Nicki’s jeans and lifted her off the sofa onto the floor… I don’t know how I did it,’ said Lisa, who is disabled.

‘Then the call handler started to talk me and count me through chest compressions. It was so surreal because everything happened in seconds.

‘I’d never done CPR training before but instinctively I found that I just seemed to know what to do… and all I could hear was the call handler counting what seems like so fast.’

She said she ‘felt Nicki’s ribs crack’ while carrying out chest compressions for six minutes before paramedics arrived in an ambulance to take over. Six of Nicki’s ribs and her sternum were broken – injuries which are common during CPR.

‘I was begging the call handler to send an ambulance because my arms were getting tired… it felt like an eternity, I was also in agony,’ Lisa added.

When paramedics arrived, they took over and used a defibrillator to restart Nicki’s heart.

Symptoms of a cardiac arrest

According to the British Heart Foundation, a cardiac arrest usually happens without warning. If someone is in cardiac arrest, they collapse suddenly and:

Without immediate treatment or medical attention, the person will die. If you see someone having a cardiac arrest, phone 999 immediately and start CPR.

You can use the charity’s free digital training tool to learn how to do CPR in 15 minutes here.

Lisa said: ‘At that point I had to walk outside, I was in total shock.

‘One of my neighbours went to get Nicki’s daughter Leanne who lives five doors away and I was standing outside the house like a zombie.

‘The paramedics called me back in to calm Nicki down who was now conscious – but really disorientated and angry.

‘She looked at me with the biggest smile on her face and said “hello, you”. That was an amazing moment.’

Because this happened at the height of the pandemic, Lisa had to stay away from her partner, who was taken to University Hospital in Coventry by ambulance.

After following behind by car, Lisa was then taken aside and told Nicki would be put into an induced coma to let her body rest after the trauma.

‘The nurse told me I was a hero for doing what I did,’ Lisa said. ‘But I didn’t think I was at all. I just did what I had to do.

‘I haven’t really allowed myself to fell as proud of myself as I know Nicki is of me. It sounds weird but for a long time afterwards I felt very guilty that I hurt her doing CPR. But now I realise the alternative would have been worse.

‘My message to anyone else faced with this situation – whether it be a loved one or a stranger – is to jump in and do CPR.

‘I’d never had any training, but all I knew is that there was someone who I loved dearly who needed my help. The alternative would have been a lockdown funeral.’

Nicki told Metro.co.uk: ‘Apparently I touched my head and then just fell back on the sofa. The next thing I remember is waking up in intensive care.

‘I saw two people with what looked like space helmets on… and I realised afterwards they were doctors, it was in the middle of the pandemic and they were wearing protective suits.

‘I also remember complaining of pain in my ribs and the nurse said “that was from the CPR Lisa did”.

‘Apparently I just said, “Oh really, I’ll be having words with her about that.” We both laugh about it now.’

Due to Covid-19, Nicki couldn’t have visitors for the 19 days she was in hospital. She had an implantable cardioverter-defibrillator (ICD) fitted on May 1, 2020 – a device which shocks the heart back into a regular rhythm if the heart goes into sudden cardiac arrest.

She was also diagnosed with Graves’ disease, dilated cardiomyopathy, heart failure and atrial fibrillation – and on top of this, caught coronavirus while in hospital.

Nicki said: ‘I had no history of heart problems. I have high blood pressure and asthma but I had absolutely no symptoms or sign that anything like this was about to happen beforehand.

‘I had been dieting so I’d lost about three stone over 18 months and was feeling good. But I had suffered a lot of stress in the years leading up to this.

‘In 2016 my mum passed away and then my nan passed away five weeks later, then my dad was diagnosed with a terminal illness two months after that.

‘So I lost my mum, dad and my nan within the space of a year. Then in 2019 my eldest son James had an aortic aneurysm and nearly died, and he’s never really recovered.’

To thank Lisa for saving her life, Nicki has nominated her for a British Heart Foundation (BHF) CPR Heart Hero Award – to get her some recognition for what she did ‘despite the huge mobility problems she has’.

Lisa was in a life-changing car accident in 2000, after her car was hit by a drunk driver and she broke her back. She had three operations on her spine, still has to take morphine and sometimes has to use a wheelchair due to her limited mobility.

Nicki added: ‘For the past 10 years I’ve essentially been Lisa’s carer… although she can walk with a stick she can’t really stand to cook.

‘But that night the tables really did turn, and she looked after me so amazingly when I got home from hospital and I couldn’t really do much for myself.

‘Lisa is my absolute hero – not just for me, but for my kids and my grandchildren who could have lost their mum and nan. I will forever be grateful to her and could never thank her enough.’

She said she is much better now, although often gets tired and suffers a little memory loss. Lisa has also suffered with post-traumatic stress disorder after what happened.

‘Now it’s all about living in the moment, trying not to dwell on what happened and do things we’ve never done before,’ Nicki said.

A BHF Heart Hero, with Metro.co.uk as its media partner this year, can be anyone from a healthcare professional doing exceptional work, to a young person living with heart disease that has shown incredible courage and determination, to an inspiring fundraiser who has found creative ways to help fund our research.

Those shortlisted will be invited to an awards ceremony in London on Thursday, December 1, when the winners will be announced.

Scottish footballer Scott Allan and TV and radio presenter Will Njobvu are among this year’s celebrity judges, and Vernon Kay is the host.

There are eight categories you can vote for including Young Heart Hero, CPR Hero and Innovative Fundraiser.

The awards ceremony raises awareness of the continued need for funding for the pioneering research that is turning science fiction into reality, and providing hope for more than seven million people in the UK living with heart and circulatory conditions.

To find out more about the categories or to make a nomination, visit the British Heart Foundation website.