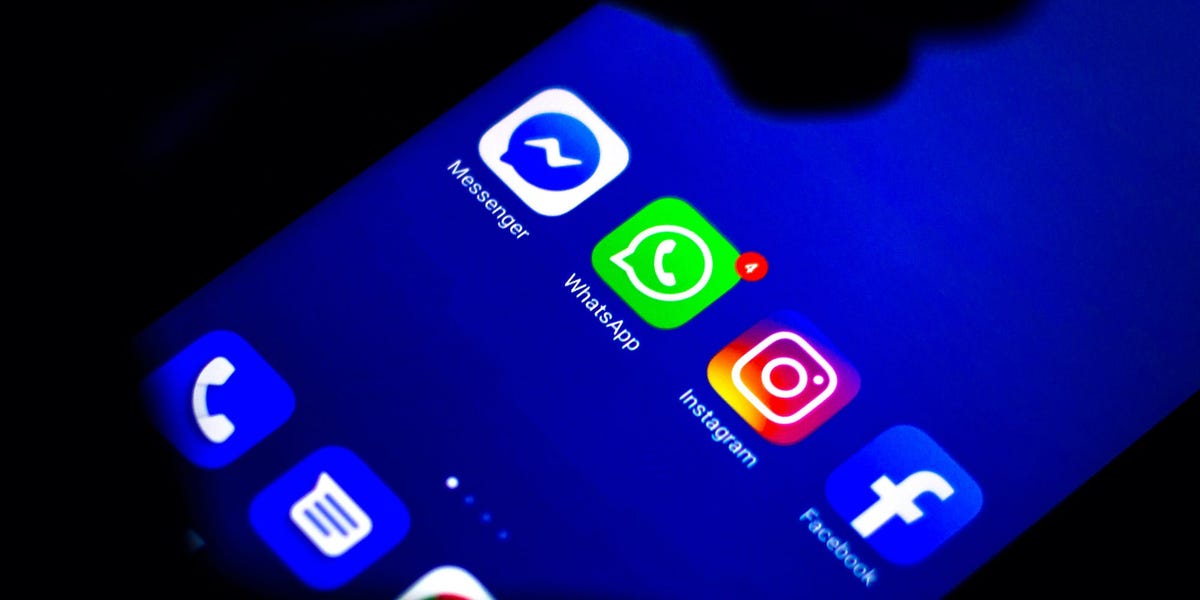 People had plenty of thoughts — and memes — about the situation.

One user tweeted a video of a person putting on makeup to resemble a clown, writing, “Me after switching between my wifi and data only to realise that instagram and facebook are down.”

“Maybe Facebook is being repaired by the same guy who repairs the McDonald’s Ice Cream Machine,” another user wrote.

Another tweet showed a photoshopped picture of a Spirit Halloween banner over Facebook’s 1 Hacker Way sign, captioned, “woah that was quick.”

Many tweets celebrated the outage.

“Maybe Facebook and IG will never come back and society will be much better,” one user wrote.

A lot of memes joked about Twitter gaining popularity as users of Facebook’s apps flocked there during the outage.

Twitter itself tweeted, “Hello literally everyone.” WhatsApp commented, “Hello!” with the waving hand emoji, to which Twitter CEO Jack Dorsey responded, “thought this was supposed to be encrypted.”

Instagram also commented on Twitter’s post, saying, “Hi and happy Monday,” adding the spiral eyes emoji in a nod to the chaos of the outage.

Similarly, one user tweeted a photo of people hugging and celebrating, writing that the image showed Twitter’s headquarters after the outage.

Another user made reference to Netflix’s hit show “Squid Game” with an image of the show’s giant robot doll, writing, “WhatsApp, Instagram and Facebook eliminated. Only Twitter made it to the second game.”

Another tweet included the oft-memed clip of The Weeknd looking confused as he walked through a maze of mirrors and lights to reach the stage to perform at this year’s Super Bowl. “Instagram and Facebook users trying to navigate Twitter,” the caption read.

Other users joked about the crisis confronting Facebook CEO Mark Zuckerberg given the outage.

One user tweeted a photo of a person staring at electrical equipment, adding the caption, “Mark zuckerberg at WhatsApp, Instagram and Facebook headquarters right now.”

In another tweet, a different user posted a photo of a worker dealing with a huge, tangled mass of power lines. The caption reads, “Mark trying to fix

Other social media companies, like Snapchat and LinkedIn, were also briefly trending on Twitter in relation to the outage.

Another tweet showed a picture of a person putting their hands on their hips and looking unimpressed, bearing the caption, “When @LinkedIn is working just fine, but no one notices.”

One user summed up the outage meme situation with a clip of a kid using a swing at a park as a building burns in the background. “Me enjoying all the memes on twitter after instagram and Facebook is down,” the tweet said.