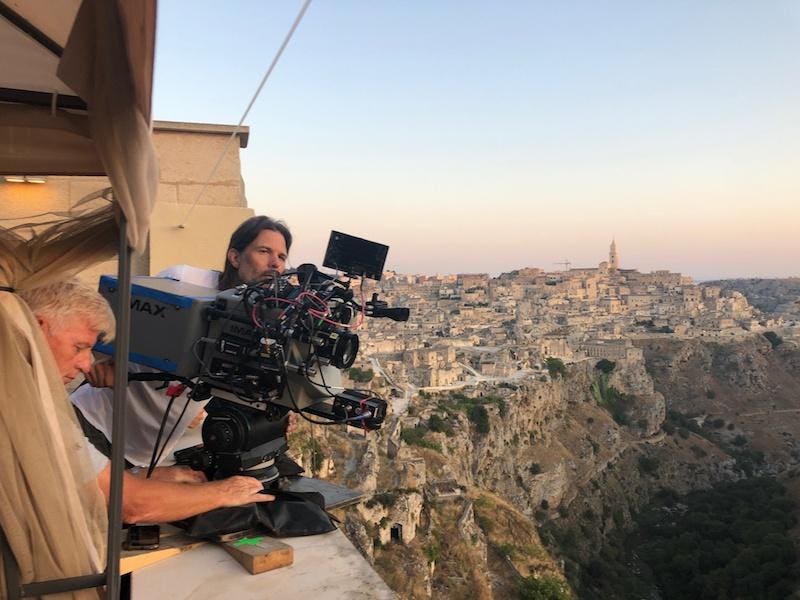 Growing up in Sweden, Linus Sandgren recalls going to the movies as a teenager and watching the action adventures of James Bond as portrayed by Roger Moore. Already an aspiring filmmaker, he and his friends would make their own Super 8 short films based on the action and romance of what they witnessed on the big screen. So, it was nothing short of a lifelong dream for the Oscar-winning cinematographer to be chosen to serve as director of photography on No Time To Die, the 25th installment of the popular spy franchise.

Hailing from Stockholm, Sandgren studied graphic design and illustration at the Berghs School of Communication and film at the Stockholm Film School, then worked his way up the ladder as a production assistant, electrician and camera assistant before beginning his career as a cinematographer in 1999. His debut feature film in 2004, the critically acclaimed Swedish fantasy drama Storm, directed by Mårlind & Stein, earned him a Guldbagge for Best Cinematography from the Swedish Film Institute. Two years later, he moved to Los Angeles and launched his commercial career, working with directors John Hillcoat, Adam Berg, Rupert Sanders, Tom Hooper, Dougal Wilson, Fredrik Bond, and earning Cannes Lions and other awards.

With his growing reputation, Sandgren was chosen by Gus Van Sant to lens his Promised Land. The cinematographer subsequently has worked with David O. Russell on American Hustle and Joy, Lasse Hallström on The Hundred Foot Journey and The Nutcracker And The Four Realms, Jonathan Dayton and Valerie Faris on Battle Of The Sexes and Damien Chazelle on La La Land, First Man and his current film in production, Babylon.

In 2017, Sandgren won the Academy Award for Best Achievement in Cinematography for his beautifully crafted camerawork on La La Land.

No Time To Die, with its numerous locations scattered across the globe and thrilling action sequences, presented the biggest professional challenge to date for the easygoing and thoughtful cinematographer. He welcomed the challenges and worked through them with director Cary Joji Fukunaga (Jane Eyre, True Detective), whom he saw as a true collaborator. The cast, led by Daniel Craig in his fifth and final appearance as the iconic British spy, and crew, were equally top notch, Sandgren says.

No Time To Die follows Bond, who has left active service and is enjoying a quiet life in Jamaica with Madeleine Swann (Léa Seydoux), his sweetheart from the previous 007 film, Spectre. His retirement is short-lived, though, when his old friend Felix Leiter (Jeffrey Wright) from the CIA turns up asking for help. The mission to rescue a kidnapped Russian scientist turns out to be far more treacherous than expected, leading Bond onto the trail of Safin (Rami Malek), a mysterious villain armed with dangerous new technology. Christoph Waltz returns as Blofeld as does Ralph Fiennes as M, Ben Whishaw as Q, Rory Kinnear as Tanner and Naomie Harris as Moneypenny. New to the franchise are cast members Lashana Lynch, Dali Benssalah, Ana de Armas, David Dencik and Billy Magnussen.

Sandgren spoke via Zoom about the experience, and the long wait for the action-packed, romantic spy film to open in movie theaters, which was delayed nearly 18 months owing to the COVID-19 worldwide pandemic. Rather than relent and send the big action movie, filmed in IMAX for a true immersive audience experience, to be streamed, the filmmakers held off until it was (relatively) safe to open in theaters. Having viewed the completed film a year ago, Sandgren expects audiences will be satisfied with the wait. Thus far, the highly anticipated film, which is being released internationally by Universal Pictures, has raked in $119 million in its opening weekend in 54 markets. No Time To Die opens in North America Friday Oct. 8.

Angela Dawson: How excited are you that No Time To Die is finally coming out?

Linus Sandgren: I’m so happy that audiences are able to see this, and that they waited for the theaters to open. It’s incredibly important, from a filmmakers’ point-of-view, to have people see it with an audience. To see it with other people is just a completely different experience. Also, the screens are bigger and the audio’s better than seeing it on television. It certainly was made for the large screen.

Dawson: What was the first James Bond movie you ever saw?

Sandgren: I grew up in Sweden so I remember seeing the Roger Moore (as James Bond) in theaters. That was my teenage experience in watching Bond, but I also saw Sean Connery’s films on TV or on video, so I’ve seen most of them. What I can remember from my childhood is that I was inspired by them to take up free diving and scuba diving.

I used to make these Super 8 movies when I was a teenager that were all inspired by the James Bond films, so there definitely is a connection as well as pride in being given an opportunity to be part of the filmmaking of the Bond movies. A lot people in the crew felt the same way.

Dawson: Did you come onboard after Cary Joji Fukunaga took over for Danny Boyle when he left the project?

Sandgren: Yes. Cary interviewed different people and we had a call. We connected on topics like how we view Bond movies, in general. He had the idea of (continuing) the Bond wit as well as the gadgets and romantic action charm. Even though Daniel Craig’s portrayal of Bond has been much deeper, more emotional as well as the action more brutal and real, I think it was important to Cary for us to have that classic escapism and adventurous feel to it—but in a modern way and time. When (Neal Purvis, Robert Wade and Phoebe Waller-Bridge) wrote it, they made it so it related to the time we live in but they gave it a visual that is a bit more enhanced and heightened. It was more in the vein of how I think Bond movies should be; they should be sort of romantic.

Plus, both Cary and I both love to shoot on film, which gives it a lushness and adds to the romantic feel, so that it made it easier to work with to make it more expressive, I think. It adds natural colors to things. Cary also mentioned he wanted to shoot it in IMAX in order to get the screens even larger. I responded very well to all of that. We both had a lot in common in terms of where we come from in our approach to storytelling and how we like to do films. It was a great match, actually, and throughout the film I was very happy collaborating with him and the crew.

Dawson: Did you have a favorite to shoot? Was one sequence more challenging than the others?

Sandgren: Everything was a challenge because we always were striving to go the extra mile. When Cary got involved in the story—the writing—he wanted to make sure we were going to travel to extremely different places. We’d also go underwater and up in the air. So, every scene was challenging because we wanted to take it all the way.

The challenge of this production was that we had a lot of different locations and, for example, we had to scout Jamaica while we were shooting in England, and then to Italy to prep there. It was just so much bigger than any film I’d worked on before, so it became challenging to keep up with the logistics of it all. But I think we tried to be inventive and make use of the locations in a maximized way.

I was very much in love with the production design of Mark Tildesley and all these wonderful sets that were built for the movie. For example, the Cuba streets were all built (on the lot) at Pinewood (Studios, in the UK). It was incredible to work with that and light that. The challenge, for me, was to do much bigger lighting setups than I’d previously done. I’d have to challenge myself to come up with a smart plan to make that work. We had 10 mobile cranes with lighting rigs in order to cover the set enough.

You want to be artistic and think about everything from an artistic point-of-view but also out of the narrative and the storyline, it has to be relevant to the story and what’s going on. So, our intention for the scenes were always based on, “What’s the intention of the scene and how can we enhance and tell the story visually in the same way?” Sometimes, it would be through the camera, how the camera moves, or if it should be more of a handheld immersive way or sweeping, big dolly moves or helicopter moves.

As with any film, you have to think about why you’re shooting and why. We usually would not do it for the effect but for what Bond is going through at that particular moment and how it should feel for him. If it’s a surprise for him or if it’s really hard work for him, we’d go handheld. But when it was a huge, action sequence, we wanted certain environments to feel larger too so we’d shoot them with IMAX cameras in order to capture the view for the audience below your feet and above your head so that you’re completely engulfed in the image.

Normally, the full wide screen is filled up before your eyes for certain sequences, but if you’re in an IMAX theater, you can see the image goes below the audience as well as above. That was to make it even more immersive. So, I hope that comes through.

Dawson: What are you working on now?

Sandgren: I’m working (again) with Damien Chazelle on Babylon with Brad Pitt and Margot Robbie. We have three weeks left. We’ve been shooting for 11 weeks in LA. We’ve had some challenging hot, desert scenes, but it’s been very fun.