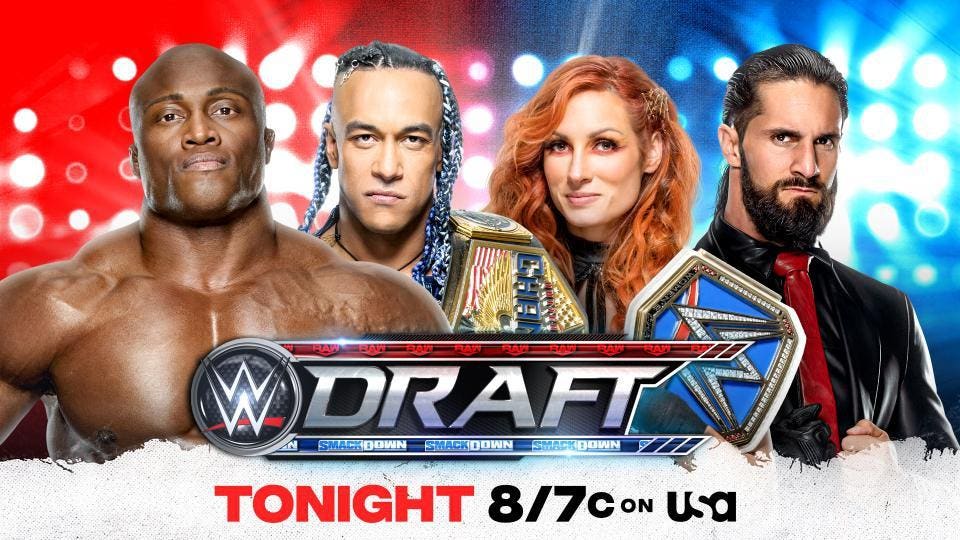 WWE Raw advertised Night 2 of the WWE Draft with an appearance from Goldberg. Friday night on SmackDown featured Night 1 of the WWE Draft where Raw stars Edge, Charlotte Flair, Drew McIntyre and The New Day were drafted to Raw while Bianca Belair, The Mysterios and Austin Theory headlined some of the Raw transactions.

Becky Lynch played nice as a babyface, especially while sparring with Charlottw Flair, right up until Bianca Belair made her way to the ring.

Charlotte Flair did a great job getting this crowd riled up as they changed “Charlotte Sucks!”

Charlotte Flair vs. Bianca Belair will be yet another unadvertised big match on Raw. What’s the point of hotshotting if there is no announcement at least a day or two in advance?

Fans were once again left deflated after Damian Priest, the “Babyface” picked up another win over the living legend. WWE screwing up Jeff Hardy is one of the more frustrating storylines of 2021.

Austin Theory would stand to benefit from a win over Jeff Hardy if WWE didn’t beat Hardy like a drum routinely over the past several months.

Dana Brooke’s TV time was a casualty in Mandy Rose being shipped off to NXT in the middle of their tag team push. It’s good to see her back.

Shayna Baszler’s monster push continued here, but before she could shatter Dana Brooke’s arm, Doudrop saved the day. It was fun while it lasted, but Baszler’s winning streak appears to be headed for an ending.

Before being drafted to SmackDown, Angel Garza and Humberto Carrillo were described as “Charming and Chariamatic.” But those are just two generic compliments that don’t really tell me anything about this team. Good for them for winning though.

I love the continuity of Dolph Ziggler wanting to be thanked for helping helping launch the main roster careers of Big E and Drew McIntyre 2.0.

Corey Graves was unbearable on commented as he tried to shout the term “Big Bob” (Robert Roode) into existence.

Big E vs. Drew McIntyre at Crown Jewel is shaping up to be yet another world title loss for Drew McIntyre, who may see more of the same on SmackDown if and when he challenges Roman Reigns.

Kevin Owens stunned Akira Tozawa without saying a word. Owens really looked like he was going through the motions here. Is WWE going to ever get around to coming up with any semblance of creative for this character?

Nikki A.S.H. is now trying to get “B.Z.K.” over, which stands for “Boom! Zap! Ka-Pow!” BZK is actually easy to chant, but I doubt anybody will.

Poor Natalya and Tamina have become accostumed to losing tag team matches of late but this time they did so as challengers.

Goldberg doubled down, and then tripled down on his threat to kill Bobby Lashley and it was hilarious. Goldberg is such a vibe, I love it.

In a “How does it Feel?” moment, The Hurt Business jumped Goldberg from behind as revenge for Gage Goldberg doing the same to Bobby Lashley. Cedric Alexander even jumped on Goldberg’s back.

Seth Rollins was at his annoying best in a backstage promo where he wore sunglasses and an overcoat almost ridiculous as his wife’s. I really want to see Heel Seth Rollins and Heel Becky Lynch side-by-side.

The Hurt Business has been reunited for weeks yet the announce team questioned whether they were really whole.

Bianca Belair vs. Charlotte Flair Ends in a No Contest

Gable Steveson celebrating with his mom and dad via satellite was sweet, and reminiscent of actual draft parties in the NFL and NBA, but the man couldn’t get anybody else to attend?

Hopefully Becky Lynch doesn’t put a damper on this match the way she did while on commentary for Bianca Belair vs. Sasha Banks on SmackDown.

Becky Lynch recited a poem, and Byron Saxton hilariously cut her off by saying “We have to get back to Flair vs. Belair.”

It’s becoming clear that commentary is one of Becky Lynch’s few weaknesses in this industry.

I have a fleeting feeling that Sasha Banks is winning the SmackDown Women’s Championship and Becky Lynch won’t get pinned.