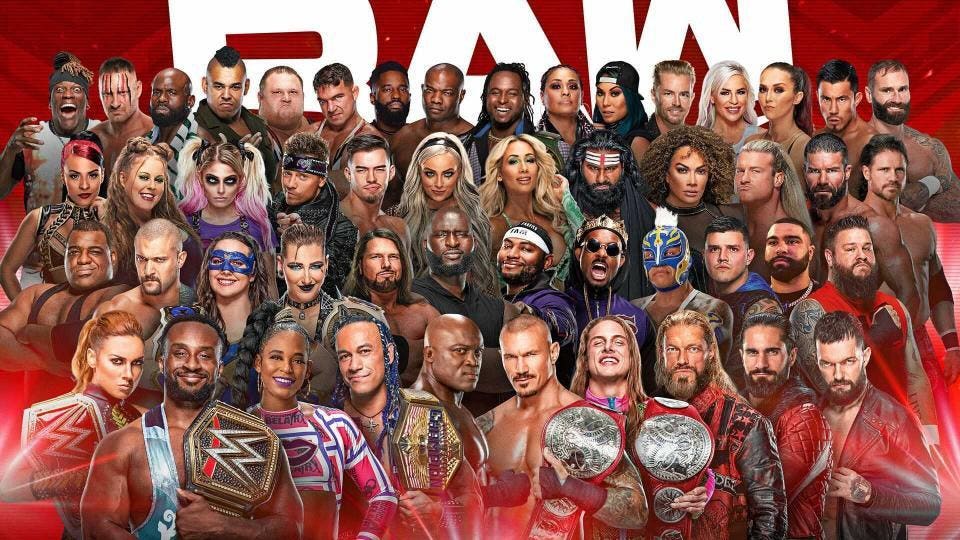 WWE Raw featured a Season Premiere with the first live show since the controversial finish to SmackDown. SmackDown saw an awkward WWE Women’s Title exchange between Charlotte Flair and Becky Lynch turn nasty amid a reportedly heated backstage confrontation between the two top stars. Flair was reportedly escorted from the building by a WWE official.

Raw also advertised a coronation for Queen Zelina, and announced a Fatal 4-Way Ladder Match between Finn Balor, Seth Rollins, Rey Mysterio and Kevin Owens to become No. 1 Contender for the WWE Championship .

Despite being a Season Premiere, Raw opened like any other WWE Raw where one WWE Superstar was being interrupted by another. The only difference from a traditional Raw was Big E’s DJ Screw shoutout.

The options for Big E’s title contenders became progressively worse with every entrant, but then a Ladder Match was announced featuring all the contenders which was so much better than any of the potential singles matches.

The Dirty Dawgz def. Alpha Academy and The Street Profits

WWE Raw beat two of its newest teams in favor of The Dirty Dawgz who I don’t think anybody will buy as a viable threat to RK-Bro.

The Street Profits lost when Angelo Dawkins took the pin. Given recent reports of Montez Ford potentially becoming a singles star, this feels like the beginning of the end of the Street Profits.

Zelina Vega as a Queen’s Crown winner presumably means she’ll get more mic time. This is not a good thing at all, it’s a GREAT thing.

Don’t know about that accent tho.

Queen Zelina needed help with the scepter to win this match, and I have no problem with that.

Becky Lynch’s title exchange with Charlotte was only mentioned in passing by Jimmy Smith, who referred to the awkward nature of the exchange.

Becky Lynch appeared to be reverting back to her babyface mannerisms, but then quickly went back to turning this crowd against her.

While Bianca Belair was the clear babyface in this exchange, these fans didn’t seem overly enthusiastic about cheering one over the other. They really just wanted to cheer both.

New theme music was a theme throughout this show, and Damian Priest was a beneficiary. I consider it a downgrade.

Watching a 6’7 T-BAR perform a moonsault, just days after the Lance Archer scare, made my heart jump. Fortunately, T-BAR pulled it off seamlessly.

This was more less character development for Damian Priest, who snapped after the DQ finish and destroyed T-BAR.

Carmella also walked out withe new theme music, and in this case, it was an upgrade.

Just days after announcing their engagement, Carmella and Corey Graves shared a moment at the announce table before it was interrupted by Liv Morgan.

Keith Lee had a mistimed tackle of Cedric Alexander, but other than that, this was an impressive-looking squash. Hopefully Lee is able to finally ride some momentum.

This was a rare Dominik Mysterio match where Rey Mysterio didn’t interfere and accidentally cost him the match.

This announce team really wanted viewers to go out of their way to watch Dolph Ziggler on a camel.

Graves concluded that because The Dirty Dawgz competed earlier in the night, they weren’t necessarily softened up. Thats’t exactly what I though the definition of softened up was.

Poor Riddle missed his signature kick while performing his comeback.

All these former SmackDown stars could use a victory, but Seth Rollins feels like he needs it the most.

Big E decided to hilariously turn his back to the monitor backstage while also watching this match.

This was a really good main event, and by the end of it, the entire Houston crowd was really into it.