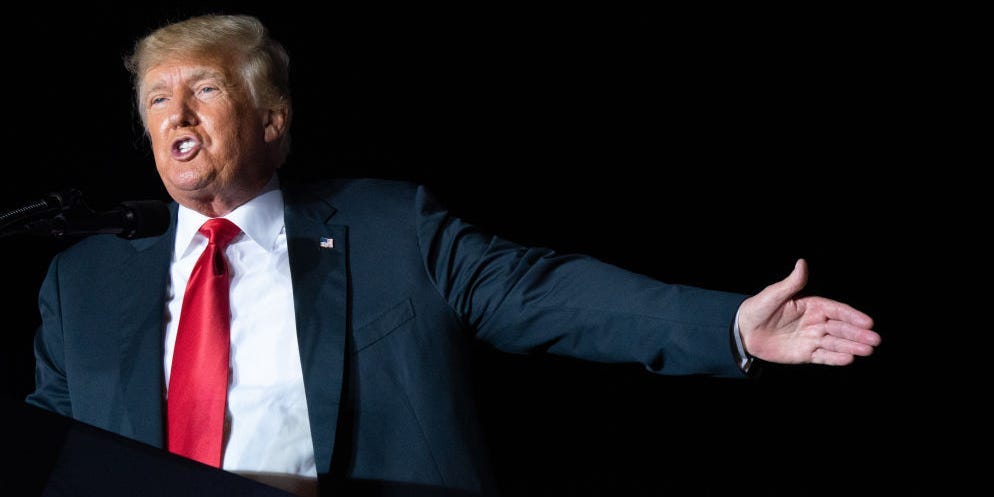 Former President Donald Trump plans to travel to Atlanta on Saturday to attend Game 4 of the Major League Baseball World Series between the Atlanta Braves and the Houston Astros, remarking that he expects to receive a “great reception” from the crowd because he “did tremendously” in Georgia during last year’s presidential contest despite losing the state.

During a Friday appearance on “The Clay Travis and Buck Sexton Show,” a conservative talk radio program, Trump contended that he would be received warmly by the crowd in the fast-growing Southern state and continued to point to unsubstantiated claims of voter fraud nearly a year after the November 2020 election.

“Tremendous, tremendous, terrible things happened in terms of that election, and election fraud, frankly,” the former president said. “But we did tremendously in Georgia, and I think we’ll get a great reception.”

In suburban Cobb County, where the Braves play at Truist Park, Biden easily defeated Trump, winning by a 56%-42% margin.

On Saturday, Trump had warm words for MLB commissioner Rob Manfred and New York Yankees’ president Randy Levine, writing through his spokesperson on Twitter that he was invited to the game by the two men.

“Looking forward to being at the World Series in Atlanta tonight,” the former president said in a statement. “Thank you to the Commissioner of Baseball Rob Manfred, and Randy Levine of the great New York Yankees, for the invite. Melania and I are looking forward to a wonderful evening watching two great teams!”

Atlanta Braves CEO Terry McGuirk on Wednesday told USA Today that Trump would not be sitting alongside the team or MLB officials, and said that the former president would be seated in a private suite.

“He called MLB and wanted to come to the game,” McGuirk told the newspaper. “We were very surprised. Of course, we said yes.”

The Braves are currently ahead 2-1 in the World Series.

Earlier this year, Trump asked fans to “boycott baseball” after the league moved its All-Star Game from Georgia to Colorado to protest the state’s highly controversial voting law that was unpopular among many corporate executives.

At the time, the former president was livid at what he felt was the MLB capitulating to the Democratic Party.

“Baseball is already losing tremendous numbers of fans, and now they leave Atlanta with their All-Star Game because they are afraid of the Radical Left Democrats who do not want voter I.D., which is desperately needed, to have anything to do with our elections,” he said in a statement.

He added: “Boycott baseball and all of the woke companies that are interfering with Free and Fair Elections. Are you listening Coke, Delta, and all!”

The leadership of Coca-Cola and Delta, both US corporate behemoths which are based in Atlanta, came out against the new voting law, which infuriated conservatives who insisted that the new rules were put in place to secure elections, contrasting with sustained Democratic accusations of voter suppression.