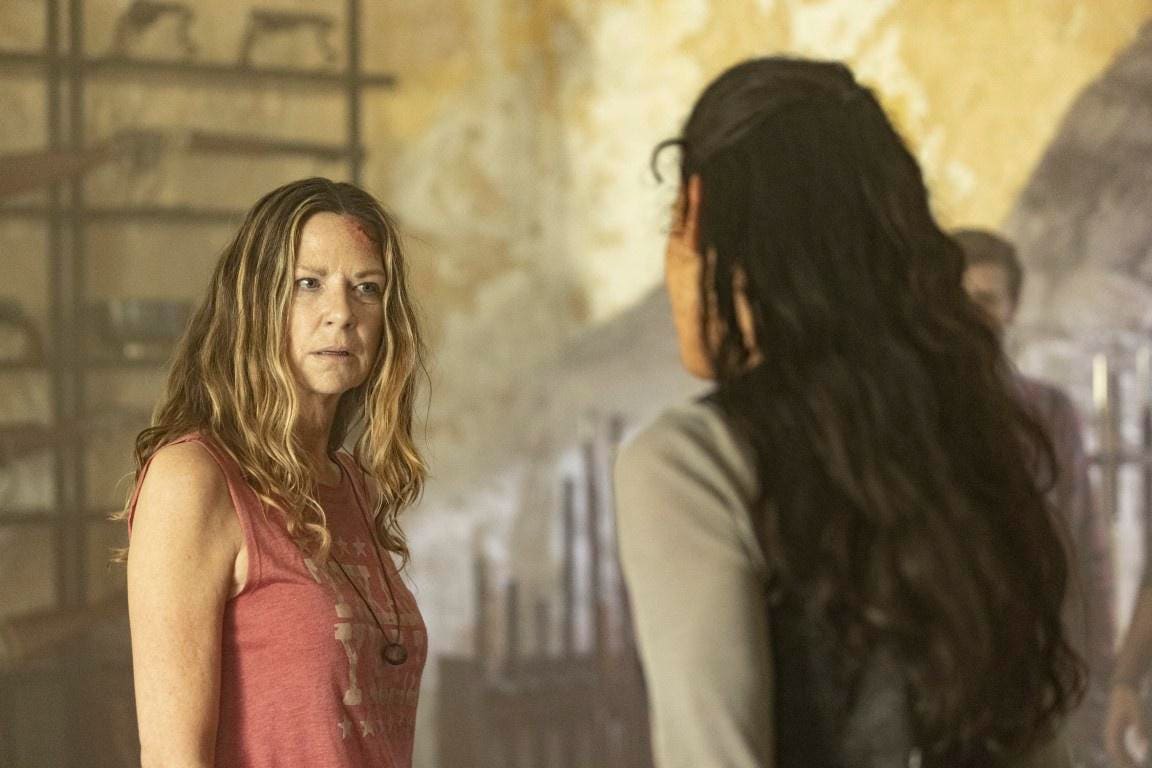 I think we’ve established a basic timeline between the Season 6 finale and the nuclear bombardment and the show’s present day in Season 7. It was iffy at first, but in last week’s episode June and John Dorie Sr. are stuck in a bunker counting down the days until they can leave.

Roughly three months have passed. In that time:

Sarah (Mo Collins) is the star of tonight’s episode. She wakes up two days after the explosion only to learn that nobody knows where Wendell is. They’ve searched for him but only found his baseball cap. So she goes out searching, and while they don’t really make it clear how long she’s out there, we can assume based on the timeline that it’s about three months or so, because when she meets up with Morgan he already knows about Strand’s compound.

While searching for Wendell, Sarah runs into Josiah, the twin brother of the bounty hunter from last season, Emile. He’s played by the same actor, Demetrius Grosse, which I guess makes him an identical twin. But we quickly learn that he’s a pretty nice guy, actually. He helps Sarah look for Wendell in exchange for her giving up Morgan’s location. How he knows that this random woman knows Morgan is beyond me. Then again, this show is full of wild coincidences and gaping plot holes.

They encounter a guy carting around a bunch of zombies and find Wendell’s bandana on him. The hound dog, Rufus, is a magical dog who can track a scent off a hat all the way to this guy who just happens to be nearby without any scent trail to follow. Neat trick! Just also totally implausible. The showrunners continue to treat Texas like it’s a very tiny area (until they need it to be very big; so big that you have to fly a plane to get around it).

This guy, all masked and suited up despite being in the “safe zone” is part of the group of bad guys we keep seeing in pretty much every episode. They have a stables filled with zombies and are dispersing them throughout the area because that’s totally something a group of survivors would do. I’m not intrigued. I don’t find these gimmicky villains interesting in the slightest.

In any case, he takes them to the stables and Sarah sees Wendell’s wheelchair. It’s covered in blood and even though there’s no body, Sarah is convinced that he’s dead. This matters so much, we learn later, because she thinks of him as her twin brother—despite not being related to one another. When she was a baby she had trouble breathing but when she was next to another baby in the NICU, she was able to breathe. This other baby was Wendell. They’ve been close their entire lives.

Distraught, she tries to drive off without Josiah despite the deal she made with him. He gets into the SUV just in time and she tries to push him out and they end up careening over a cliff edge and crash. When they wake up, Sarah sees that there’s a nuclear warhead right by the car that hasn’t exploded, but it’s damaged and probably leaking radiation.

Sarah has a panic attack and Josiah talks her down, eases her mind by telling her that if he were actually dead she’d know it. She tells him she doesn’t think he’s a killer. Then they get out and fight some zombies. Of course, Morgan shows up. “I killed you! I chopped off your head!” he says when he sees Josiah and they instantly start fighting.

This is where the episode takes a big turn for the worse. Mind you, despite perfectly fine performances from all the actors, this episode has been pretty lousy up to this point. But then they kill the dog.

Poor Rufus is bitten by the decapitated head of Emile. This causes Josiah to quit fighting as he rushes to the soon-to-be-dead dog wailing “What have I done?” He’s instantly filled with remorse and does a complete 180 degree turn on the whole revenge thing. It’s a deeply unearned moment of contrition and revelation, but I guess Josiah isn’t a killer and just needed to lose his dog to find that out.

Rufus was the best remaining character on the show, however, so this was a major blow.

Everyone makes up and Morgan and Emile become friends. Emile even apologizes to Morgan for his brother coming after him. That’s . . . big of him. Implausibly big, but whatever.

Morgan says they should go to Strand’s compound to see if Wendell is there. We can get there by dawn if we start now, he says. Gee, what a swell idea, Morgan!

And sure enough, Wendell is in Strand’s tower but Strand won’t let Sarah in because she apparently didn’t take his side back at the nuclear submarine. What? I guess I don’t remember everyone’s reaction at the time. I thought they were all just running for their lives because a bunch of nuclear missiles were about to kill everyone (though ultimately none of the cast was offed by a nuclear blast, miraculously).

He won’t let her in but he’ll let Wendell out. But if Wendell goes out, he won’t let him back in—which feels needlessly cruel. The writers are really screwing up Strand’s character. He’s a complicated guy and they’re making him a cartoon villain with inexplicable motives. The scene in the submarine is a great example of just how badly they’ve interpreted this character. It’s a real shame.

But the real reason they go to all the trouble of not letting her in and not showing Wendell at all seems obvious: They’ve written him off the show without killing him. We haven’t seen Wendell since Season 6, episode 10 and he only showed up I believe twice in Season 6 at all. It seems likely that we won’t see Wendell again and that Daryl Mitchell is out, but I can’t say that for sure.

So yeah, another pretty bad episode though not as bad as the last two. This show is just gimmick after gimmick, crazy coincidence after crazy coincidence. There’s no consistency, no sense of geography. The fake radiation is absurd. People are super paranoid about it at one point and walking around with their masks off the next.

They killed the damn dog. It’s just awful. How AMC continues to have any faith whatsoever in the showrunners is beyond me. It seems deeply foolish to continue paying for such lousy television.

The entire Walking Dead franchise is just awful right now. Even the main show, which was bouncing back before Season 11, has taken a major turn for the worse. Almost the entire first 8 episode block was just bad.

I’m several episodes behind on World Beyond because I already feel like Fear has become more of a chore than anything. It’s not even fun to hate watch it at this point. Maybe World Beyond is better but I just don’t care about any of the characters enough to get invested.

Fear is a joke at this point. Just a bad, unfunny joke. It used to be great. Season 3 was genuinely great. What we have now is not the same show. It’s a withered husk of what it once was, shambling forward into laughable obscurity one horrible, no good episode at a time. Somebody at AMC needs to wake up and demand better quality writing and storytelling from the people running these shows.

The acting is fine, the special effects remain great, but the writing is bad. The showrunners have ruined a once-good show and it’s frustrating, as a critic and a fan, to watch something that I once really enjoyed be so badly abused. If I were any of the talented actors on this show I would be livid. If I were an executive at AMC or a shareholder I would be furious. And yet here we are, renewing mediocrity over and over and over again. I just can’t explain it.

Can you? Can anyone please help me understand why AMC puts up with this crap? Fear The Walking Dead is dead. It has been dead since Season 4. What we are watching is an imposter. Even the few characters that remain from the first three seasons are imposters, shells of their former selves.

And next week we have a Dwight and Sherry episode, so that’s fun. Sherry, who Dwight should have kicked to the curb long ago, is quite possibly my least favorite character on any of The Walking Dead shows. I hope a zombie gets her.

What did you think of tonight’s episode?