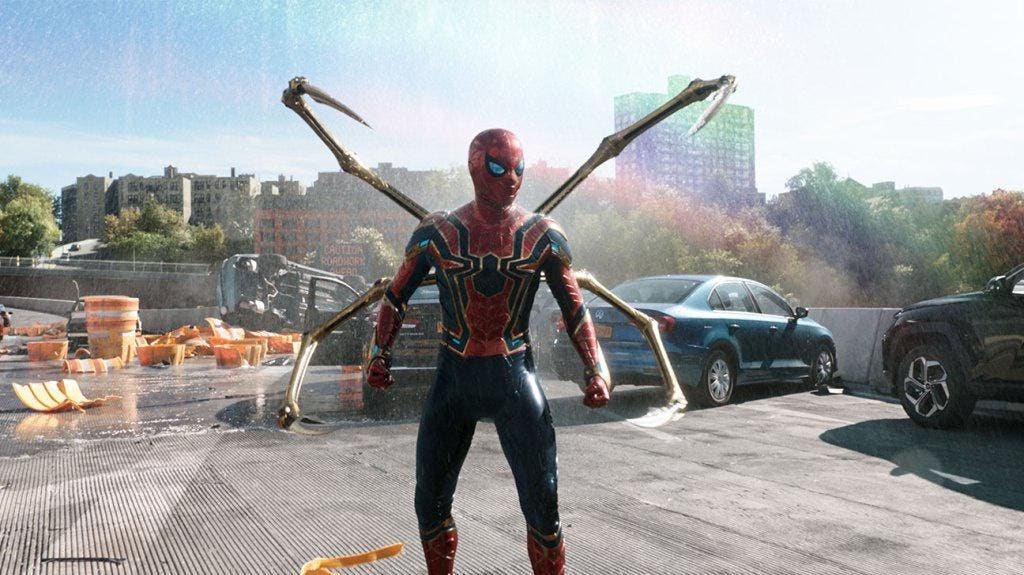 After a week of marketing for the *other* Sony/Marvel flick, Jared Leto’s Morbius, Sony has unleashed this new theatrical poster for Spider-Man: No Way Home. As for the next trailer, it’s just a question of whether it drops this week or specifically early next week times with Sony’s Ghostbusters: Afterlife opening on November 19. As for the poster, it’s pretty simple, centering Tom Holland’s Peter Parker surrounded by Doctor Octopus’ robotic arms and with the Green Goblin flying onto the scene in the background. So, yeah, Alfred Molina is popping back up, and so is Willem Dafoe. But otherwise, well, we’ll see what the trailer does or doesn’t reveal.

Rumors and speculation aside, the first teaser was pretty darn spoiler-free beyond the core premise. Its job was to establish that audiences didn’t really need to watch WandaVision or Loki to understand the multiverse-hopping hijinks of this third Marvel Spider-Man flick. But now it’s a matter of whether Sony will use what we already know (Peter Parker and Doctor Strange botch a spell to make everyone forget that Peter is Spider-Man and encounter established Spidey villains from previous Spidey movie franchises. Will the next trailer spill more goodies, namely franchise-hopping cameos, or will they merely affirm what we already know to avoid spoiling anything else?

Sony’s Spider-Man: Far from Home’s marketing used A) Avengers: Endgame spoilers and B) Mysterio’s outright lies about the multiverse to run what was easily the most spoiler-free campaign ever for a Spider-Man movie. We all complain about the copious trailers and clips from The Amazing Spider-Man campaigns, but the second trailer for Sam Raimi’s Spider-Man showed Mary Jane being caught mid-air by Spider-Man at what was clearly the film’s action climax. The Spider-Man 2 trailer presented an abridged version of the film in chronological order, followed by the climactic action montage. Spider-Man 3 left Venom out of the first trailer but gave away the film’s climax in the final trailer.

Contrary to current discourse about spoiler culture, audiences didn’t care when trailers for Robert Zemeckis’ Cast Away gave away the whole movie (to the tune of $220 million domestic from a $39 million Christmas debut) in late 2000. They didn’t care in 2005 when the second trailer for Wes Craven’s Red Eye revealed the entire film, including the villains’ scheme being foiled. It still grossed $96 million worldwide on a $26 million budget. Fans didn’t care in 2012 when the trailers for The Avengers showed Iron Man being caught mid-air by the Hulk during the film’s climax. If audiences want to see it, they’ll show up.

It’s great if you can successfully open a movie without giving everything away, and legs will always be longer if you can pull that off. But some random Variety critic tweeting out a mid-credits cookie for Eternals the night of the premiere affected the box office by around $0.00. We’ll see if Sony uses mere confirmation of what we know as the prime marketing hooks while hiding everything else. The film is going to be a huge hit regardless, likely the first $100 million-plus opener (and maybe the first $300 million-plus domestic grosser) since The Rise Of Skywalker two years ago that weekend. We’ll see which secrets Sony keeps close to the vest between now and December 17.

For the first time in the cinematic history of Spider-Man, our friendly neighborhood hero is unmasked and no longer able to separate his normal life from the high-stakes of being a Super Hero. When he asks for help from Doctor Strange the stakes become even more dangerous, forcing him to discover what it truly means to be Spider-Man.