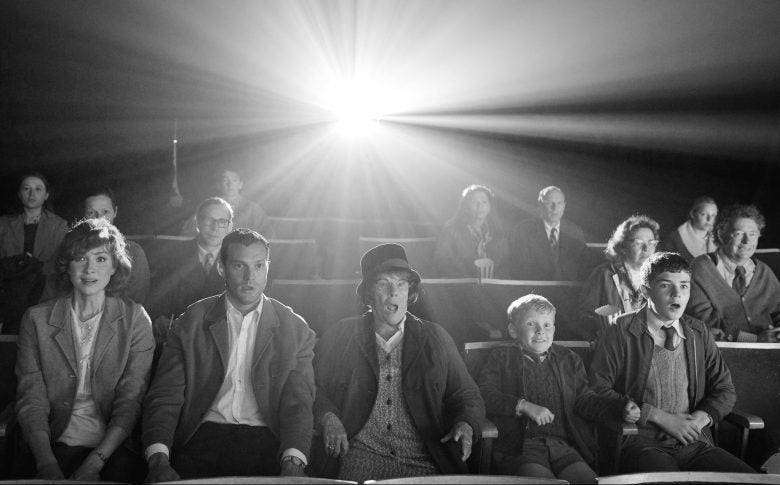 Belfast, the latest from Kenneth Branagh, is a bittersweet, nostalgic look into a fictionalized account of the director’s own childhood. It’s a gorgeously shot film that follows an extraordinary talent in young Jude Hill alongside a cast of talented performers. At the same time, the film’s narrative loses significant emotional impact via tonal inconsistencies. It’s a good film struggling to be a great one, falling short of the mark.

Belfast begins with a colorful set of aerial shots before the camera descends into 1960’s Belfast in stunning black and white. Young Buddy (an endlessly charming Jude Hill) is a boy with the usual concerns. Will he get the girl? Can he get his grades up? Will he be able to convince “Pa,” ably played by Jamie Dornan, to take him to the movies (on the rare occasion he’s home?). This set of formative youthful concerns is challenged by the rising power of real world dangers—most importantly, the increasing conflict between Protestant and Catholic populations in the area (most decidedly seen as Protestant gangs patrol neighborhoods to kick Catholic families out). Add to that recipe the tension caused by Pa’s increasing absence from the home due to work, or the pressing considerations of moving despite the family’s lack of money and you have a poignant series of concerns for a young boy.

Belfast has a lot going for it. Both Dornan and Caitríona Balfe’s “Ma” are capably played (with the latter forming the emotional core of much of the film). Founding out the cast with Buddy’s grandparents (Judi Dench and Ciarán Hinds) and you find a number of believable, complex interpretations of these characters who land the emotions and conflict of each individual scene. And young Jude Hill has a remarkable amount of screen charisma for such a young performer that it’s hard to walk away without being engrossed in this window into his young life.

From a technical standpoint, Belfast boasts particularly exceptional cinematography from Haris Zambarloukos. The black and white imagery is stunning, yes, but from the opening the film boasts a number of intriguing shot choices that really catch the eye (along with the effortless occasional switch between black-and-white and color). It’s lovely, and one of the best shot films of the year.

While the film does boast a number of individually successful components, as a whole it is a little less than the sum of its parts. From a story perspective, the narrative attempts to balance the escapist wonder and childish concerns of youth against a rising tide of real, dangerous troubles. Admittedly, that’s a hard task that’s been ably walked by narratives like Jojo Rabbit (which took a farcical fantasy route that effectively side-stepped the war’s horrors) and The Florida Project before it among many others. It’s a hard task to balance such diametrically opposed tones without sacrificing one to the other. Here, Branagh attempts to balance both, and its in that balancing act that the film misses the mark.

Our introduction to The Troubles (the period of ethno-nationalist conflict in Northern Ireland that the film is set within) is properly horrific: a stunned Buddy is narrowly pulled inside as cars are set ablaze, bottles thrown, and other weapons flail away in an act of thuggish intimidation against the family’s Catholic neighbors. The seriousness of the cinematography certainly packs a punch here as the rising tension adds an ominous flair to these acts of brutality. It is quite clear that the stakes are high, and they remain so (if not higher throughout). At the same time, a number of these scenes are immediately followed by moments of happy family life, or Buddy’s childhood shenanigans, that create significant emotional whiplash within these sequences.

Adding to the tone issues are an all-Van Morrison soundtrack (eight Morrison tracks with a ninth, new song for the film) full of songs that are pleasing on their own but which do not fit what’s happening onscreen in a number of scenes. The net effect of these elements is a film that has a number of excellent components but which struggles to land on the kind of film it wants to be. Is it a serious story of a hard-luck family pushed against a deadly political backdrop? Is it a story about youthful escapism that hides real world terrors for a young mind? Is it a story about a youngster’s future attempt to escape these ills? In the end, it’s none of these things because at times it tries to be all of them depending on the scene we’re watching.

Belfast is a capably made, well performed, gorgeously shot film with a host of individual elements that land well. As a whole, it’s an overall enjoyable cinematic experience with a standout performance from a thoroughly likable young talent. At the same time, the film could be a complex stunner about the fleeting attempt to protect childhood innocence in the face of real world horrors… but instead it settles for a pleasant yet tonally inconsistent film that doesn’t quite know what it wants to be.