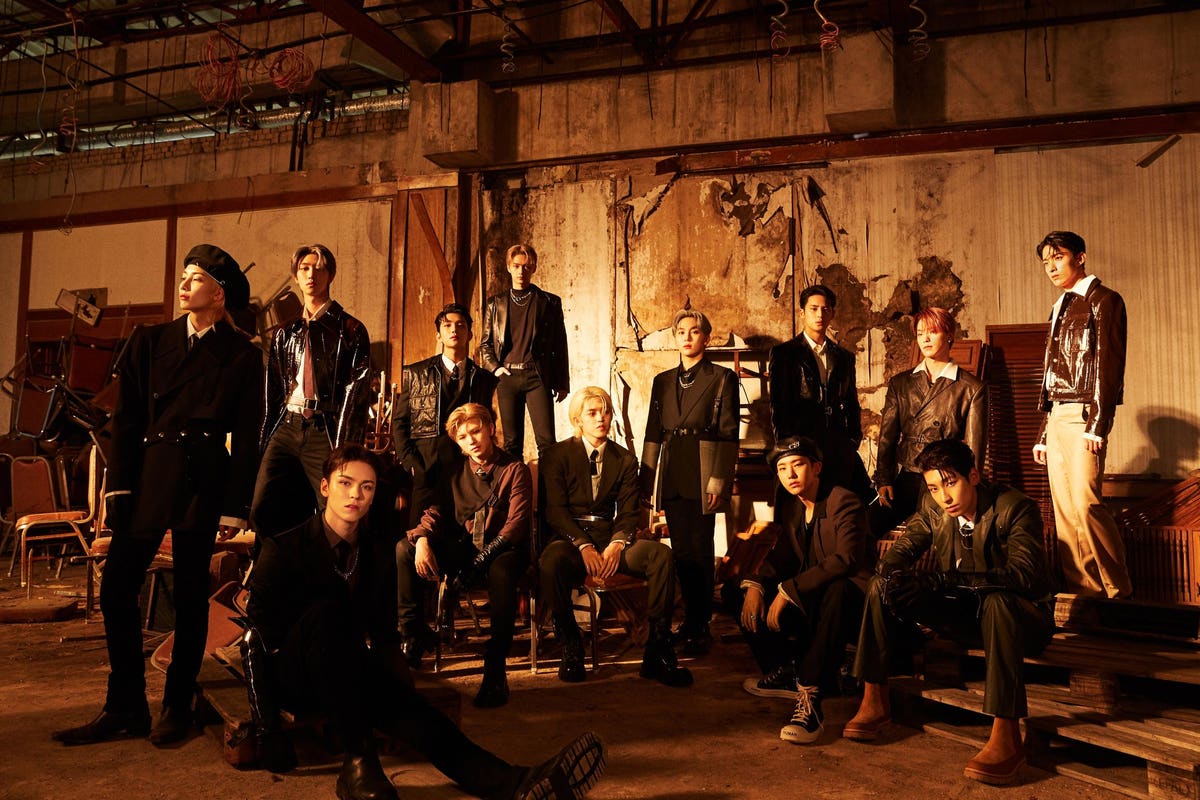 When looking at Seventeen’s latest breakthrough achievements following the late-October release of new album Attacca—nearly two million copies sold worldwide, the K-pop act’s highest- and longest-charting release on the Billboard charts yet, plus new creative territory with their first-ever English track—the boy band is continuing their commercial hot streak in the latest, greatest step towards in trusting their musical vision.

Seventeen have spent their 2021 exploring different sides of love and relationships in what they call their “Power of Love” series. So far, fans have received a single from rappers Wonwoo and Mingyu in “Bittersweet” that ponders early questions when catching feelings, the Your Choice EP that takes a passive and peaceful role in letting the partner take the lead in love, contrasted with the recently released Attacca to push into a more dominant approach to snatch their chance. For the respective releases, SVT moved through subtle R&B/hip-hop, calm-yet-powerful electronic-pop, and a rock-infused collection of energetic genres in the group’s ongoing efforts to let the message of the music lead them to the right sound.

“The keyword when we set out to put this album together was ‘passion,’” says Seventeen member Joshua, the vocalist born in Los Angeles who fans see his eyes noticeably light up when he sings but also when he’s entertained by a question. “We thought about what sort of music can best express this passion. And when you’re really immersed in something, when you’re really passionate about something, it can get your heart racing. So, we had that be our theme. That increase in beats per minute, the song had to have that fast BPM, and then, of course, it was rock music that would that suited the keyword that we had.”

Woozi, the soft-spoken vocalist in Seventeen that also acts as the group’s main producer with credits on all seven of Attacca’s tracks, explains that “Your Choice was Seventeen ‘ready to love,’ and, in contrast, Attacca is a continuation of the ‘power of love’ theme. In taking that one step further, sort of expressing the more passionate love and trying to show this side of Seventeen. I think the feeling and emotion that we impart through this album is that the heart-racing feeling; the passion and unstoppable emotion” he says before Joshua adds, “We’re better able to straightforwardly send out our message out to the audience through this style because it’s rock.”

Seventeen speaking with the message-first approach is a purposeful part of their process, one they say has been in play since 2016 when they were just a year into their careers.

“It was up to the album [Love & Letter (Repackage)], the album that had ‘Very Nice,’ where we were using a lot of music that was already made for us and we would work on presenting the music,” Woozi says. “But since that time, we adopted a more systematic approach to the album creation process. So, like you said, rather than ‘What music?’ it was more like ‘What’s the message?’ first and then choose a genre that can best express that message. That’s how the process evolved.”

For those fans who have been following through the years, unsurprisingly, “Very Nice” surged to become the band’s highest-peaking single on the Billboard World Digital Songs chart and has since become their go-to closing concert song, all indicating that Seventeen’s vision was, indeed, connecting in larger ways.

For the first-ever English track that appears under Seventeen’s name, Joshua and Vernon also let the theme and their personal tastes lead them to the perfect soundscape to express the feelings of frustration and longing on the EP’s angsty bonus track “2 Minus 1.”

“Vernon was the one that suggested the type of style,” Joshua of the song written by the duo. “I listened to pop-punk, I remember I used to listen to a lot of Avril Lavigne, so I was like, ‘Yeah, this is like a definitely a way for us to express emotions and the messages that we want to put out.’ Pop-punk was the perfect style for that.”

With credits in both the writing and the music production, the undeniably cool and incredibly polite Vernon (he kicks off our conversation asking how my day’s going despite it being past 2 a.m. in Korea) says his listening habits steered him to the right sound by embracing both yesterday’s pop-punk and modern takes heralded by the likes of The Kid Laroi. “I’ve been into that genre recently and when our label offered a chance to work on an all-English track to me and Joshua, I thought ‘Why not a pop-punk track?’ Bring back the early-2000s vibes, but we also took inspiration from that and new-school sounds.”

Just like how Joshua and Vernon pushed themselves to new music worlds, the different factions of Seventeen—the 13 members notably split themselves up into hip-hop, vocal and performance unit teams—purposely push themselves to become all-around, all-star musicians when they record these special songs.

“The biggest thing that’s in consideration when we do the unit songs is the genre,” Woozi explains of recording with the vocal unit, hip-hop unit and performance. “Almost all of our albums have unit songs in them, so, if we have the same kind of music and use the same kind of genres, then we’ll sort of limit the kind of charm that each unit has and can express. All the members agreed that we all want to try new genres to show our skills—we have a lot of discussions when we make these choices. I think because we have these discussions, we try these new genres and challenge ourselves, and because we really analyze and study it, we were able to show this wide variety of sounds and music styles through our unit songs.”

Most certainly, listeners can hear the homework done for each track.

Performed by the performance unit consisting of members Hoshi, Jun, The 8, and Dino, “PANG!” is a fun, wobbly cut with throbbing, rhythmic production perfect for the group’s rappers to handle. Instead, the hip-hop team took on “I Can’t Run Away,” where S.Coups, Wonwoo, Mingyu and Vernon showcase palpably tender vocals to sing through the acoustic-leaning pop cut. Meanwhile, “Imperfect Love,” performed by the vocal unit with Woozi, Jeonghan, DK, Seungkwan and Joshua, delivers a live-rock production perfect for filling the future arenas the guys will eventually play and establishes the quintet beyond from the ballad sound they’ve perfected in earlier records.

While SVT continue to hit new career milestones, the K-pop group is clear in their intentions to keep progressing. “As grateful as we are for all the love that we receive from our fans, we’re still hungry,” Vernon says. “We hope to go up and up even more; we strive for more.”

Seventeen say that they’re yearning to perform live (“We’re just really waiting for the day to go back touring again,” Vernon says) and land upon additional accomplishments for their individual songs (Joshua adds, “Personally, I definitely want our songs on the Billboard charts too”), the guys always go back to the message.

“I really hope listeners can receive a lot of strength from our songs,” Joshua says when thinking about overall goals for the album. “I just want a lot of the audience to appreciate our music and, hopefully, they can relate to messages that are put into our album.”