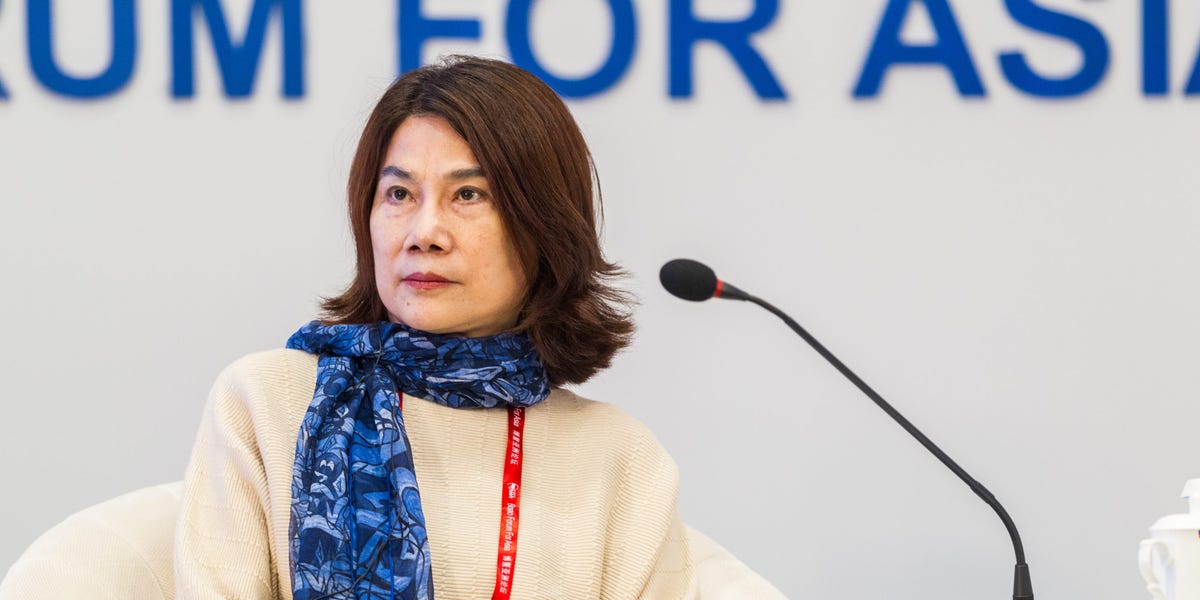 As Chinese business magnate Dong Mingzhu addressed journalists and investors at a corporate gathering, a young lady in a dark grey jacket stood silently by her on stage.

“I hope she can stay by my side,” said Dong, beaming as she extended her arm toward her companion. “I want to nurture her to become the second Dong Mingzhu.”

The crowd laughed and applauded, but Dong’s comment was no joke. Soon after she spoke, the renowned businesswoman gave the floor to the recent graduate beside her, who introduced herself as a “student” of Dong’s and later performed a solo dance routine.

Local reporters and people online pounced on what Dong said, and discussion of the young lady by Dong’s side became the second-top trending topic on social media platform Weibo on Friday, with two million mentions.

Analyzing past remarks from the business figure, social media users came to the consesus that Dong, the chairwoman of a Fortune 500 company, had announced her successor — the dancing 22-year-old intern Meng Yutong.

Neither Dong nor Gree Electric, the company of which Dong is chairman and president, have confirmed that Meng will indeed become her successor. Gree Electric did not immediately reply to Insider’s request for comment.

The media frenzy is driven largely by Dong’s reputation, status, and most of all, her attitude toward succession.

The chairman and president of Gree Electric, an electric appliance manufacturer and one of the world’s largest air-conditioner makers, Dong climbed her way through the company ranks after joining as a salesperson in 1990 while widowed with a three-year-old son, per The South China Morning Post.

She’s known as China’s “iron lady,” with a famous hardline approach to business and an uncompromising work ethic.

“When she chews you up, she doesn’t even spit out the bones,” said one male competitor of Dong, according to The New York Times. Dong has said she never once took a day of annual leave in her entire career with Gree, adding that she has no friends “because I cannot have friends.”

In 2017, she was named China’s top businesswoman by Forbes, and she’s regularly ranked among the top five female figures in Asia’s business world. Under her, the Guangdong-based Gree Electric operates in over 160 overseas markets and has more than 90,000 employees, per its website. According to Forbes, it has a market capitalization of $55.3 billion as of May.

Now 67 years old, Dong has entertained rumors that she’s planning her retirement. And she’s been clear about how she intends to choose who will replace her: Dong said she would select a successor based purely on their merit, and would never pick a person because of familial relations or friendship, according to local news outlet Daily Economic News.

She’s also been vocal about giving young people a chance to lead. “Today’s young people should strive for recognition in their careers. Dreams are made real in China,” Dong once said, per state-controlled Daily Economic News.

Meng Yutong, the intern in the spotlight

That’s where Meng comes into the picture. A graduate from Zhejiang University who majored in Spanish, she met Dong on a reality TV show called “We who are new to the workplace,” where office newbies get a chance to interact closely with famed bosses.

Meng was one of the contestants and impressed Dong, one of the two bosses featured on the show, according to local outlet Jinan Times. Videos of the pair holding hands and selfies of them together have emerged online as well.

Dong hired Meng as an intern for three months, and confirmed during the recent corporate event that Meng was promoted to be her secretary.

Since then, Meng has responded to the media attention by posting a video on Weibo that’s received 90,000 likes. In the video, she calls herself the “girl selected by Dong Mingzhu” and said she’d been with the company for two months before being promoted.

“The video of that event with my boss received a lot of attention from everyone. Thank you very much for your continued support and encouragement to boss Dong and Gree Electric,” said Meng.

“I think there are a lot of people who are better than me, more diligent than me, and more talented than me. I’m just lucky to have such a good opportunity, a good boss, and a good platform,” she added.

Meng said she felt overwhelmed by the responsibility and pressure of being selected, and constantly maintained that she’s an “ordinary girl.” Meng did not immediately respond to Insider’s request for comment.

People on social media have thrown in their support for Meng. “She’s not going to be the second Dong Mingzhu, she’s going to be the first Meng Yutong,” said one user in the comments.

“She’s 22 and is Dong Mingzhu’s secretary. I’m 22 and still playing and losing at video games. This sucks,” wrote another.