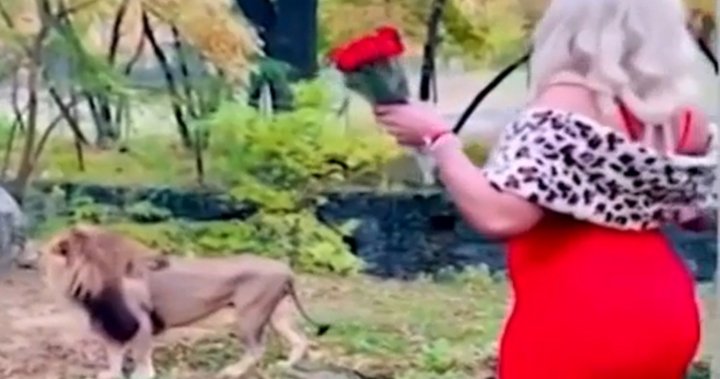 Clutching two dozen red roses and carrying fistfuls of what appeared to be $100 bills, a woman was caught on camera Thursday hopping a barrier to a lion exhibit at New York’s Bronx Zoo.

Approaching one of the lions, the woman, clad in a blonde wig, bright red dress and leopard-print shawl, can be heard saying “I missed him so much,” and throwing the money into the air.

“King, I love you, I came back for you,” the woman exclaimed, according to a witness who spoke to NBC News.

The Bronx Zoo released a statement about the incident, clarifying that the woman was indeed trespassing into a forbidden area, but was separated from the animal by water.

“The woman did not enter the exhibit and was never in the same space as the lions which are separated from zoo visitors by a wide moat. The incident lasted only a couple of minutes and the woman was gone when staff arrived on scene. The zoo intends to prosecute the woman for criminal trespass if she is identified.”

“This situation involves one individual who is determined to harass our lions with no regard for her safety, or the safety of our staff and our guests, and no regard for the well-being of the lions. We have an NYPD substation in the park and are working closely with them to resolve this situation with this individual,” a spokesperson for the zoo said in an updated statement Friday.

In 2019 a woman pulled a similar caught-on-camera stunt.

Myah Autry hopped the lion enclosure barrier and was seen talking to one of the lions and doing a bit of a dance for them.

She told reporters at the time she “wasn’t fearing of the lion,” claiming that the animal loved her and that she was the lion reincarnate.

Although unconfirmed by police, it appears Autry may have been responsible for this week’s stunt.

The woman who witnessed the latest incident pointed out to NBC that same-day posts made to Autry’s Instagram account Thursday show Autry wearing the same outfit as the woman spotted taunting the lion.