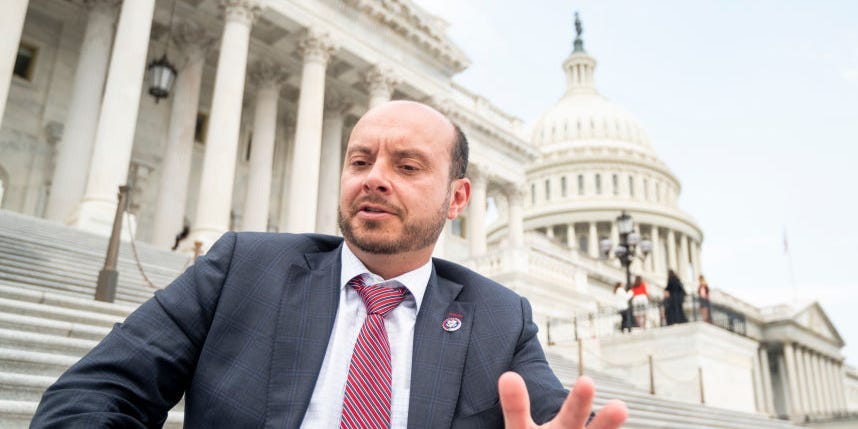 A Long Island man has been arrested for allegedly issuing a death threat against a New York congressman who was one of 13 House Republicans who backed the $1.2 trillion bipartisan infrastructure bill, according to The Associated Press.

Kenneth Gasper on Wednesday was taken into custody after sending his telephoned message to GOP Rep. Andrew Garbarino, according to a statement from the Nassau County Police Department.

The police department said that Gasper “did not agree with” the infrastructure vote and made the phone call on Monday.

“He used some profanity and then he made a threat, and it went like this — ‘If I see that mother-effer in the street, I’m going to kill him,'” said police commissioner Patrick Ryder.

According to the criminal complaint, Gasper, a 64-old-year retired Long Island Rail Road employee from Lake Ronkonkoma, was “extremely upset over an infrastructure bill” and “called Garbarino a ‘RINO,'” or Republican in Name Only, a pejorative used to lambast party members who are deemed as insufficiently conservative.

Ryder on Friday said at a press conference that the Nassau police have “zero tolerance for this type of behavior for any of our residents,” pointing to the death threat, The Long Island Press reported.

“In the world that we’re living in today, the climate that is out there, these threats we take very seriously,” he added.

Gasper was charged with second-degree aggravated harassment and was arraigned on Thursday. He pleaded not guilty and was released from jail on his own recognizance, according to WABC-7.

The Long Island man must also stay away from the congressman.

“It’s amazing people want to kill me over paving roads and clean water,” Garbarino told BuzzFeed News. “The misinformation out there about this bill is so bad that I’m getting death threats.”

“I’ve had the police at my house, and they’re more concerned about these [threats] that have been coming in than the ones I’ve gotten in the past,” he said to The New York Post on Wednesday.

The $1.2 trillion infrastructure legislation, which will appropriate long-sought funding for the nation’s highways, bridges, and roads, was crafted by President Joe Biden and a bipartisan group of US senators earlier this year, before being taken up and passed by the Senate in a 69-30 vote.

For months, Republicans watched as disagreements between moderate and progressive Democrats stalled the bipartisan bill, along with the separate $1.75 trillion reconciliation social spending framework. Progressives wanted party leaders to put both bills up for a vote on the floor at the same time, while moderates pushed for a vote on the bipartisan legislation without tying it to the more expansive Build Back Better Act.

The Democratic moderates prevailed and the House approved the bill in a 228-206 vote last week.

However, many conservatives, including former President Donald Trump, are angry that the bipartisan framework received any GOP votes at all, especially since the breakaway Republicans pushed the bill over the finish line after six members of the progressive “Squad” all rejected the legislation.

Punchbowl News reported earlier this week that House Republican leadership was preparing for a push by rank-and-file members to remove GOP supporters of the bill from their committees.

And Rep. Marjorie Taylor Greene of Georgia, who in February was removed from her committees in response to incendiary social-media posts, described fellow party members who voted for the infrastructure bill as “traitor Republicans.”

Greene launched public attacks on the 13 House Republicans via Twitter, tweeting the office numbers of lawmakers she said “handed over their voting cards to Nancy Pelosi.” Days later, GOP Rep. Fred Upton said he received threatening voicemails after the vote, including an expletive-filled recording in which a caller wishes death on him, his family, and his staff.

Longtime Republican Rep. Peter King, who for 28 years represented the seat that Garbarino now occupies, criticized the threats that have been leveled against supporters of the bill.

“I totally agreed with Andrew Garbarino’s vote on the infrastructure bill,” he said. “But whether I agreed or not, this whole idea of threatening people, other members of Congress, giving out phone numbers, to harass, intimate or threaten is absolutely disgraceful.”

Gasper’s attorney, John Rey, refutes that his client issued the threat to the congressman.

“Ken is an ordinary American who was offended when politician Garbarino became an overnight Democrat and voted, in Ken’s view, to wreck our country,” Rey told WABC-7.