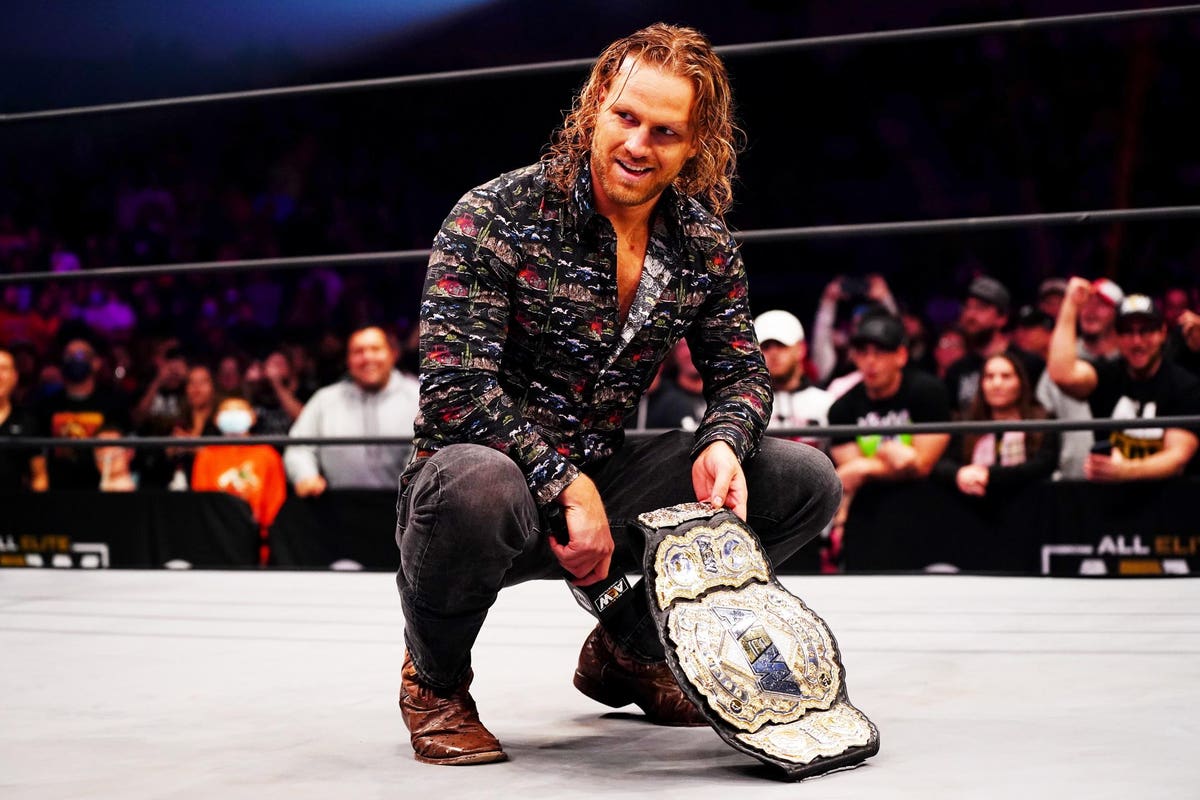 Hangman Adam Page defeated Kenny Omega to win the AEW World Heavyweight Championship as The Young Bucks appeared complicit in watching their frenemy win the promotion’s biggest prize. Despite appearing ringside late in the match, neither Young Buck interfered in the match, with Matt Jackson even nodding in approval. Page celebrated with The Dark Order following his big win.

Hangman Adam Page’s win marks the culmination of a long journey for the piping-hot top babyface, who challenged Chris Jericho in the promotion’s first AEW World Heavyweight Championship match at AEW All Out in 2019.

After getting over as a beer-swigging cowboy, Page appeared primed to unseat Kenny Omega leading up to AEW’s New York City debut at AEW Grand Slam from Arthur Ashe Stadium. In a shocking turn of events, however, Hangman Adam Page lost to The Elite in a 10-man elimination tag team match for the right to become No. 1 Contender. Instead of a potentially defining moment in Flushing Meadows, Page instead took a planned absence. Behind the scenes, him and his wife were expecting their first child.

While nothing is promised to anybody in the unpredictable wresting business, Page’s time off only allowed him to double-down in developing a nuanced, effective and poignant babyface character. His momentum only grew upon returning in a Casino Ladder Match, where the familiar opening riff of his theme music gave way to a rockstar reaction. Page all but sealed his ascent to the top of the company with a picture-perfect babyface promo the October 16 broadcast of AEW Dynamite. Page’s masterpiece even drew praise from hardened AEW critic Jim Cornette, who hailed it as “maybe, except for Punk’s return, the best babyface promo ever on AEW television.”

Not only did Page not miss a step despite pausing the biggest push of his career, this cowboy seemed to have gained a few more tools in the belt that holds up his chaps. Hangman Adam Page winning this match was the only satisfying result in a worthwhile saga that has created AEW’s next major star.

With his loss, Kenny Omega’s AEW world title run ends at just under one year at 346 days. For what it’s worth, the span saw Omega receive two five-star match ratings from longtime wrestling journalist, and Kenny Omega enthusiast, Dave Meltzer of the Wrestling Observer Newsletter. At the peak of his reign, Omega was a dominant belt collector, simultaneously holding the AEW, IMPACT, TNA and AAA Mega World Championships.

In addition to effective storytelling and storyline development, beating such a protected and dominant champion will also help solidify Page as a perennial top stars and one of AEW’s unquestioned pillars of the present.