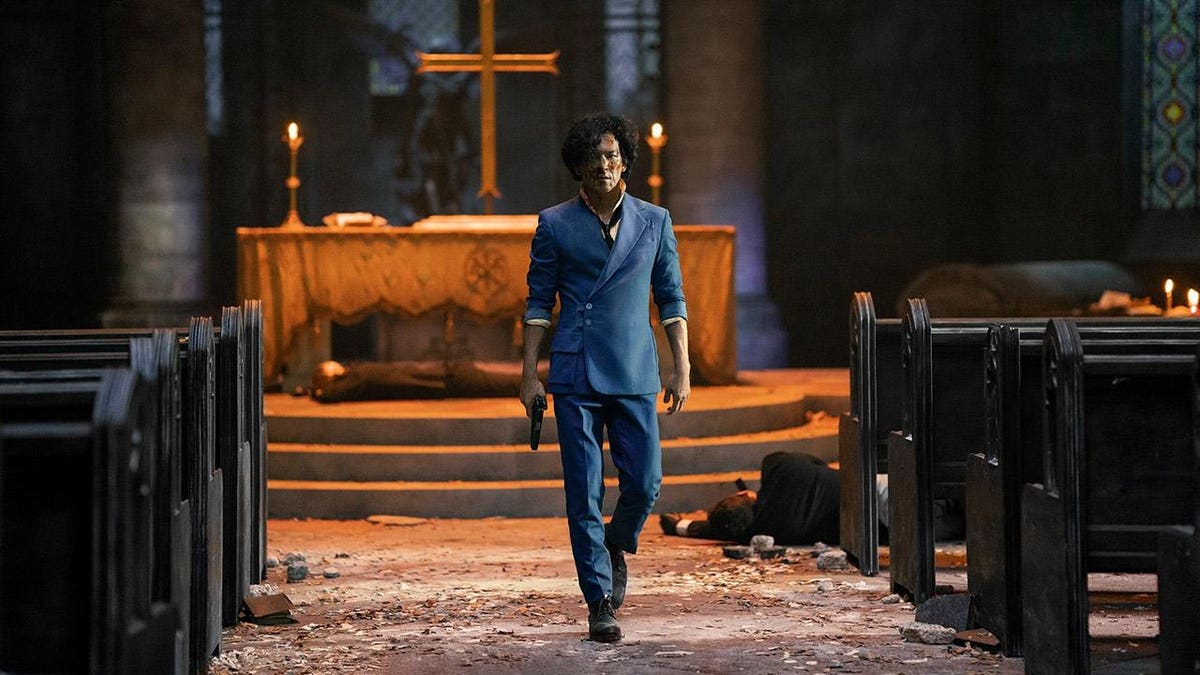 After finally watching all the way through the first season of the new live-action Cowboy Bebop, I am sad to say that it was a rather depressing experience.

This review is broken into two parts; the first covers this live-action Cowboy Bebop series purely on its own merits, and the second on how it adapts the original anime of the same name.

Judging the series on its own, the first thing that strikes you is just how cheap it looks. The lighting and cinematography are all over the place in terms of consistency and quality. The result is that the series often comes across as quite amateurish.

In some segments, it looks like someone was going for an anime-turned live-action approach, similar to the Wachowski’s Speed Racer movie, and in others, it is more of a film noir. The latter obviously works better, but the consistency, or lack thereof, is just off-putting.

All of this isn’t helped by stilted and forced dialogue. While the actors do their best to bring the script to life, the odds are sadly stacked against them. The actors are generally great throughout though, but the overall framing of action sequences and the story is just off.

If you compare this to the first season of The Expanse, which had less than no money in a budgetary sense, then there is a greater degree of visual consistency and more nuanced dialogue in that show than in this one.

As for the story, that falls more under the anime adaptation side of things, but it does eventually find its groove, but getting to that point as a viewer is definitely a struggle.

Before I get onto the anime adaptation aspect, just on its own, this series doesn’t work. I get that the actors clearly want to do right by the material they’ve been given, but everything else lets that down.

When it comes to the anime side of things though, there is some good, but sadly, there is a lot more bad going on here.

The best way to look at this series in relation to the original anime is that it is more of a remix than a straight adaptation. Characters and events occur in a different order but tend to turn out the same way, with some significant exceptions later on.

The good stuff is things like the spaceships looking like they do in the anime. The Swordfish II, Bebop, and Red Tail look very close to Kimitoshi Yamane’s original designs (though he doesn’t seem to be credited here, which is a bit odd). The CG effects for the space-based parts of the show also look great, and the music by Yoko Kanno is spot on, though that shouldn’t be overly surprising.

The respective actors also nail their roles and are decently likable. John Cho does a solid rendition of Spike, Mustafa Shakir is an excellent Jet and really feels more of the Bebop’s captain now, and Daniella Pineda is endearingly irritating as Faye, which is as it should be. Alex Hassell also makes a great Vicious and has one of the hardest tasks in the series in building out a character that was originally very enigmatic. In general, the cast do a solid job given what they have to work with.

However, the bad stuff is, well, everything else. The original anime was built around standalone episodes, with a few being part of a broader story arc. In that, things like the Syndicate and Vicious and Julia were much more mysterious and occurred in the deep background of the story.

Whereas in this series, the Syndicate, Vicious and Julia, are in almost every episode and play a massive part in the overall story. This doesn’t help characters like Vicious, as much of his menace came from his mysterious and unfathomable nature, though Hassell handles this well all things considered.

The setting is also not as convincing as in the original anime. While this series takes parts of the original setting and remixes them, it lacks the coherence of the anime. Again, this probably could have been assuaged if people such as Shoji Kawamori had been involved, but this is sadly not the case.

The other significant departure from the anime is that this live-action series just tries too hard.

So much of the appeal of the anime was the general laid-back and chilled nature of the show. Yes, there were scenes of intense action, but those were borne out of how each episode’s plot evolved. While this version does partly get to that approach by the end of the season, its initial episodes don’t flow as they should.

This also applies to much of the fighting scenes, as Spike almost dances and flows through a fight in the anime. It’s almost balletic. Here, it’s far more rigid and comes across as weirdly unnatural and very obviously scripted.

Some of the in-world special effects for combat scenes also don’t work out so great, with Mad Pierrot probably being the best example, as it just looks cheap and not at all believable.

The remix approach also results in some weird episodes where the overall story arcs don’t really work but are more there to set up technology or other aspects to make later episodes come together.

There are a few times when this series does seem to just about work and all the elements roughly gel together, but those moments are fleeting and rare as well as being towards the end of the season. Sadly, the majority of this show is just a mess and one that looks quite cheap with it.

While I had hoped this live-action Cowboy Bebop would deliver on bringing the classic anime into the real world, it falls very short of that. Not only on its own merits but also in relation to the host anime it is meant to be adapted from. Maybe this live-action version will find its feet in a later season (if there will be any), but for now, this is a tough series to sit through and will definitely infuriate fans of the original anime.