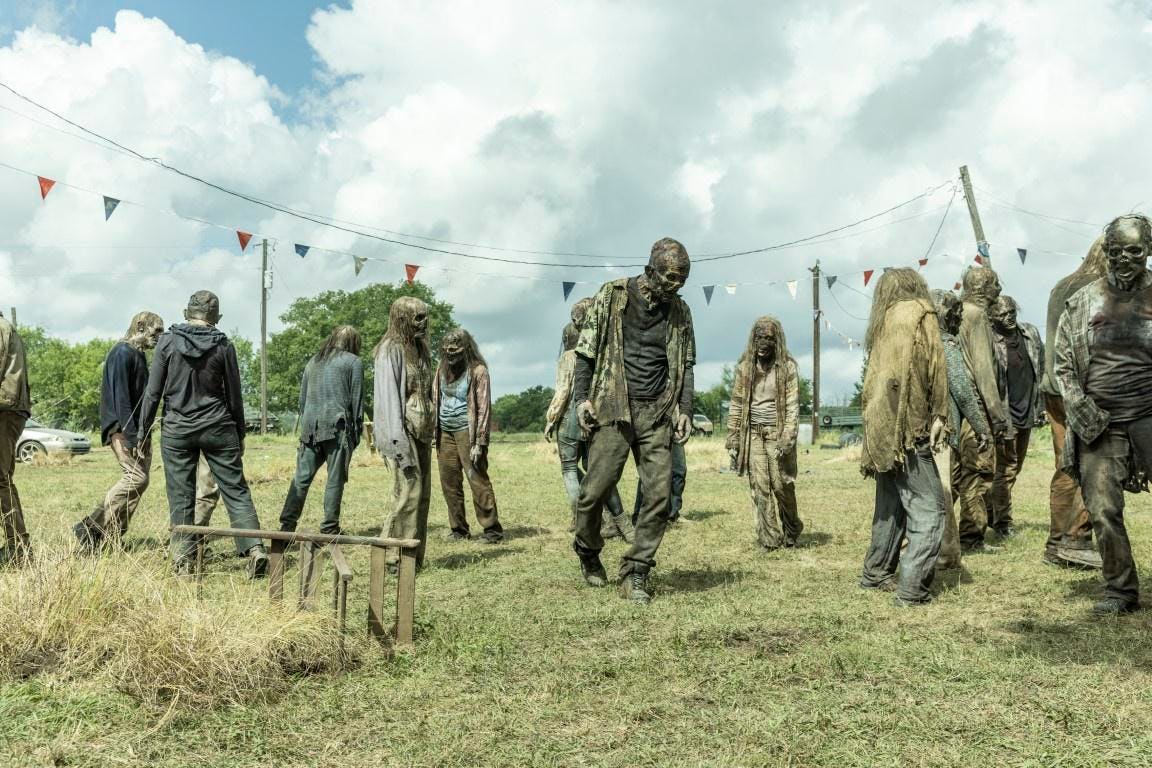 Fear The Walking Dead continues to sink to new lows and tonight’s episode, “Till Death” which stars Dwight and Sherry, another couple on this show with next to no chemistry.

John Dorie Jr. and June had very little chemistry (after their first stellar episode). Morgan and Grace have no chemistry whatsoever. But Dwight and Sherry have . . . negative chemistry? Is that a thing? I get absolutely no romantic vibes from these two at all. Sherry is such a deeply unlikable character, for one thing.

In this episode we learn that the two of them, rather than searching for their lost companions, have taken up as vigilantes, riding their horses around Texas and taking down bad guys. Sure, Fear The Walking Dead writers, that’s a plausible scenario that makes a ton of sense in a show where we’ve already established that anyone can reach anyone anywhere with a walkie-talkie.

They’re bunked up with a small family. A dad, a mom and a young girl. There’s some talk of going to Padre, because I guess literally everyone on this show knows about this place and wants to go there for some reason. But those plans are cut short when Strand hires an assassin to kill the family, including the little girl, in order to prove a point to Dwight and Sherry that it would be safer if they came to live with in the tower (and to convince them to bring the woman he sent them to find back).

That woman is Mickey, who escaped Strand’s tower to go find her husband (when she does he’s already dead).

Apparently Strand wants her back so that he can . . . prevent her from telling others how she escaped. But if she’s gone, doesn’t that solve his problem? Strand’s hit convinces Dwight that they should bring her back, that it’s too dangerous out there, but Mickey and Sherry (rightfully) disagree.

I have to stop at this point. I have to say this: Fear’s writers and showrunners have gone too far here. They have crossed the bridge into what I can only describe as deeply insulting territory. This is a huge betrayal of Strand as a character. It was bad enough portraying him as some tinpot dictator (replete with goofy uniform) but this is a bridge too far. Strand would not hire an assassin to kill innocent people. He’s not a child killer. He’s a knave. He’s selfish. He lies and schemes. But he does not go out of his way to murder children.

It’s too much. I’m just disgusted by the whole thing. Truly disgusted. Sure, he’s just a fictional character, but Strand is one of the only original characters remaining. So far, the current showrunners have done their level best to destroy every character they didn’t come up with.

Daniel is a weak, soft old man whose driving character trait is currently forgetfulness. Alicia is just gone entirely. I’m not even sure she’s coming back. It wouldn’t surprise me if they dragged us along this whole half of the season only to reveal that she’s dead or gone.

And now Strand is a caricature of an actual villain, twirling his mustache and strutting about like some idiotic peacock, hiring killers to take out innocent people including children, just to prove a point. Give me a break.

The episode runs its predictable course, by the way.

Dwight and Sherry do not take Strand up on his “offer” though it would have been awesome if Sherry, who seems to get off on ditching Dwight, had said “Actually yeah, I’ll go but keep this schmuck out!” Because Dwight, my dude, you can do better than this. She’s not good for you, man.

They’re surrounded in the end by the group of masked bad guys that keep popping up but instead of a fight, these guys enlist (or coerce) Dwight and Sherry’s help in finding Padre. Because they’re good at finding things or something. Padre is this season’s MacGuffin, apparently. Cool writing, Fear team.

0/5 stars. Two thumbs down. I give this episode a big fat “F” and while I’m not sure that it’s the very worst episode this show has ever given us, it sure tries hard to be. What a disaster.

Check out my piece from earlier today about how AMC needs to start taking the problems with these shows seriously, and watch my video on the matter below: