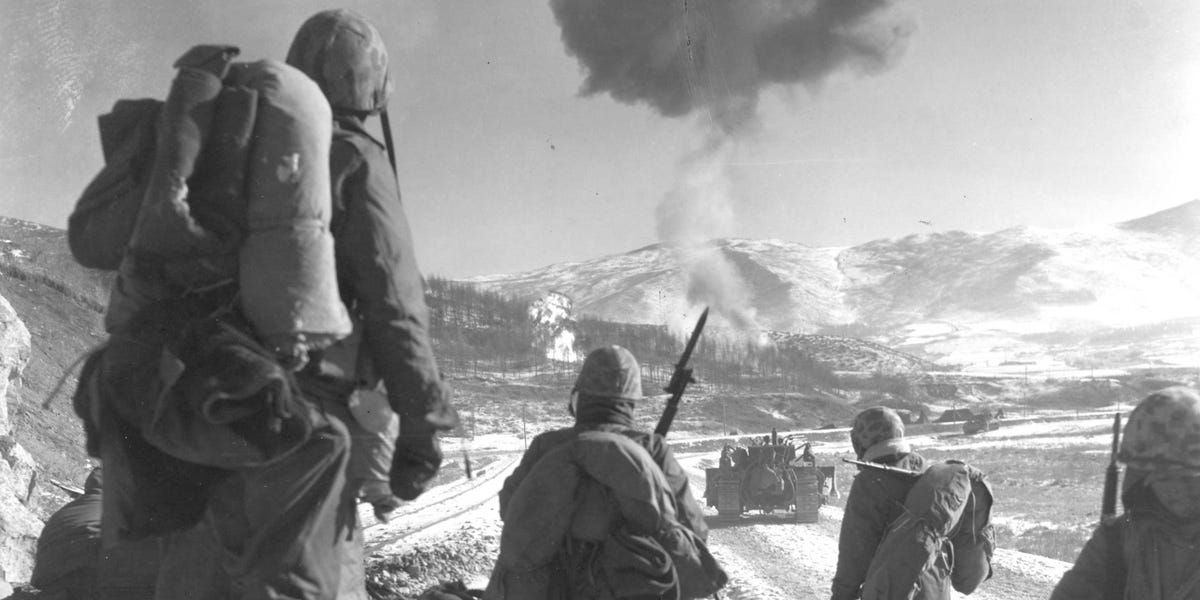 Nations often linger on their military defeats as long as, or longer than, they do on their successes.

The Battle of Kosovo remains the key event of the Serbian story, and devastating military defeats adorn the national narratives of France, Russia and the American South. What are the biggest disasters in American military history, and what effect have they had on the US?

In this article, I concentrate on specific operational and strategic decisions, leaving aside broader, grand-strategic judgments that may have led the US into ill-considered conflicts.

The US may well have erred politically in engaging in the War of 1812, World War I, the Vietnam War and Operation Iraqi Freedom, but here I consider how specific failures worsened America’s military and strategic position.

At the opening of the War of 1812, US forces invaded Upper and Lower Canada. Americans expected a relatively easy going; the notion that Canada represented the soft underbelly of the British empire had been popular among American statesmen for some time. Civilian and military leaders alike expected a quick capitulation, forced in part by the support of the local population.

American forces (largely consisting of recently mobilized militias) prepared to invade Canada on three axes of advance but did not attack simultaneously and could not support one another. American forces were inexperienced at fighting against a professional army and lacked good logistics. This limited their ability to concentrate forces against British weak points.

The Americans also lacked a good backup plan for the reverses that the British soon handed them. None of the American commanders (led by William Hull, veteran of the Revolutionary War) displayed any enthusiasm for the fight, or any willingness to take the risks necessary to press advantages.

The real disaster of the campaign became apparent at Detroit in August, when a combined British and Native American army forced Hull to surrender, despite superior numbers. The British followed up their victory by seizing and burning several American frontier outposts, although they lacked the numbers and logistical tail to probe very deeply into American territory.

The other two prongs of the invasion failed to march much beyond their jumping-off points. American forces won several notable successes later in the war, restoring their position along the border, but never effectively threatened British Canada.

The failure of the invasion turned what Americans had imagined as an easy, lucrative offensive war into a defensive struggle. It dealt a major setback to the vision, cherished by Americans, of a North America completely under the domination of the US. Britain would hold its position on the continent, eventually ensuring the independence of Canada from Washington.

In September 1862, Robert E. Lee invaded Maryland with the Army of Northern Virginia. Lee’s objectives were to take advantage of foraging opportunities (the movement of armies across Virginia had left the terrain devastated), support a revolt in Maryland and potentially inflict a serious defeat on Union forces.

Unfortunately for Lee, information about his battle disposition fell into the hands of Gen. George McClellan, who moved to intercept with the much larger Army of the Potomac. President Abraham Lincoln saw this as an opportunity to either destroy or badly maul Lee’s army.

The Battle of Antietam resulted in 22,000 casualties, making it the bloodiest day in the history of the Americas. Despite massive numbers, a good working knowledge of Lee’s dispositions and a positional advantage, McClellan failed to inflict a serious defeat on the Confederates.

Lee was able to withdraw in good order, suffering higher proportional casualties but maintaining the integrity of his force and its ability to retreat safely into Confederate territory.

McClellan probably could not have destroyed the Army of Northern Virginia at Antietam (19th-century armies were devilishly difficult to annihilate, given the technology available), but he could have dealt it a far more serious setback. He vastly overestimated the size of Lee’s force, moved slowly to take advantage of clear opportunities and maintained poor communications with his subcommanders.

A greater success at Antietam might have spared the Army of the Potomac the devastation of Fredericksburg, where Union forces launched a pointless direct assault against prepared Confederate positions.

Antietam was not a complete failure; the Army of Northern Virginia was hurt, and McClellan forced Lee out of Maryland. Lincoln felt confident enough following the battle to issue the Emancipation Proclamation, promising to free slaves in rebellious states.

Nevertheless, Antietam represented the best opportunity that the Union would have to catch and destroy the Army of Northern Virginia, which remained one of the Confederacy’s centers of gravity until 1865.

On December 11, 1941, Germany and Italy declared war on the US. Germany’s treaty obligations to Japan did not require action in case of Japanese attack, but Germany nevertheless decided to make formal the informal war that it had been fighting with the US in the Atlantic.

Historically, this has been regarded as one of Hitler’s major blunders. At the time, however, it gave German submariners their first opportunity to feast upon American coastal shipping.

In the first six months of 1942, the U-boat force commanded by Adm. Karl Doenitz deployed into the littoral of the eastern seaboard. The Germans had observed some restraint prior to Pearl Harbor in order to avoid incurring outright US intervention. This ended with the Japanese attack.

The German U-boats enjoyed tremendous success, as none of the US Army Air Force, the US Navy, or American civil defense authorities were well prepared for submarine defense. Coastal cities remained illuminated, making it easy for U-boat commanders to pick targets. Fearing a lack of escorts (as well as irritation on the part of the US business community), the US Navy (USN) declined to organize coastal shipping into convoys. The USN and US Army Air Force, having fought bitterly for years, had not prepared the cooperative procedures necessary for fighting submarines.

The results were devastating. Allied shipping losses doubled from the previous year and remained high throughout 1942. German successes deeply worried the British, such that they quickly dispatched advisors to the US to help develop a concerted anti-submarine doctrine.

Anti-submarine warfare (ASW) was (and is) immensely complicated, requiring a great deal of coordination and experience to pull off correctly. The US had neither worked diligently on the problem prior to the war, nor taken the time to learn from the British. However, the USN would make good its mistake later in the war, developing into a very effective ASW force and deploying its own submarines to great effect against the Japanese.

Following the successful defense of Pusan, and the stunning victory on the beaches of Inchon, the US Army and Marine Corps, with support of Republic of Korea forces, marched deep into North Korea in an effort to destroy the Pyongyang regime and turn over full control of the Korean Peninsula to Seoul.

The US saw a counteroffensive as an opportunity to roll back Communist gains in the wake of the Chinese Revolution, and punish the Communist world for aggression on the Korean Peninsula.

This was an operational and strategic disaster. As American forces approached the Chinese border on two widely divergent (and mutually unsupportable) axes, Chinese forces massed in the mountains of North Korea.

Beijing’s diplomatic warnings became increasingly shrill, but fresh off the victory at Inchon, few in the US paid any attention. China was impoverished and militarily weak, while the Soviet Union had displayed no taste for direct intervention.

When the Chinese counterattacked in November 1950, they threw back US Army and Marine Corps forces with huge loss of life on both sides. For a time, it appeared that the People’s Liberation Army’s counteroffensive might completely rout UN forces. Eventually, however, the lines stabilized around what is now the Demilitarized Zone.

This failure had many fathers. While Gen. Douglas MacArthur pushed most aggressively for a decisive offensive, he had many friends and supporters in Congress. President Harry Truman made no effort to restrain MacArthur until the magnitude of the disaster became apparent. US intelligence lacked a good understanding of either Chinese aims or Chinese capabilities.

The invasion resulted in two more years of war, in which neither China nor the US could budge the other very far from the 38th parallel. It also poisoned US-Chinese relations for a generation.

On May 23, 2003, Paul Bremer (chief administrator of the Coalition Provisional Authority) ordered the Iraqi Army to disband. It is difficult to overstate the unwise nature of this decision. We don’t need hindsight; it was, as many recognized, a terrible decision at the time.

In a moment, swept aside was the entirety of Iraqi military history, including the traditions and communal spirit of the finest Iraqi military formations. Eradicated was the best means for managing the sectors of Iraqi society most likely to engage in insurgent activity.

It’s not hard to see the logic of the decision. The Iraqi Army was deeply implicated in the Baathist power structure that had dominated Iraq for decades. Many of its officers had committed war crimes, often against other Iraqis. It was heavily tilted toward the Sunnis, with few Shia or Kurds in positions of responsibility. Finally, it had, from the American perspective, a recent history of appallingly poor military performance. As Bremer argued, it had largely dissolved in response to the US invasion of Iraq.

But this was not how many Iraqis viewed the army. The Royal Iraqi Army had come into existence in the early 1920s, when Iraq remained a protectorate of the British Empire. It had revolted in 1941, but the British made the wise decision to keep the force together so as to maintain order.

In 1948, its units fought against Israeli forces during the wars of Israeli independence, and it participated in the 1967 war, if briefly. In the 1980s, it waged an eight-year struggle against Iran. While its legacy was complex, for many Iraqis, service in the Army (and in particular its performance against Iran) remained a source of personal and national pride. Eradicated was 80 years of institutional history.

It’s impossible to say how the reconstruction of the Iraqi Army might have played out differently, but then it’s difficult to imagine how it could have been worse. The Iraqi Army has consistently failed in the most elementary of military tasks when not directly supported by American forces. It remains unpopular in broad sectors of Iraqi society, and its performance against lightly armed ISIS fighters has made it the laughingstock of the region.

American military failures have undoubtedly had an impact on the country’s strategic position, but have yet to fundamentally undercut national power.

The US recovered quickly from Operation Drumbeat, Antietam, the disbanding of the Iraqi Army and the defeat in Korea.

National greatness depends on more than simply victory in battle, as the persistence of US power suggests. Nevertheless, each of these avoidable defeats proved costly to the United States — in blood, treasure and time.

Robert Farley is a senior lecturer at the Patterson School of Diplomacy and International Commerce.