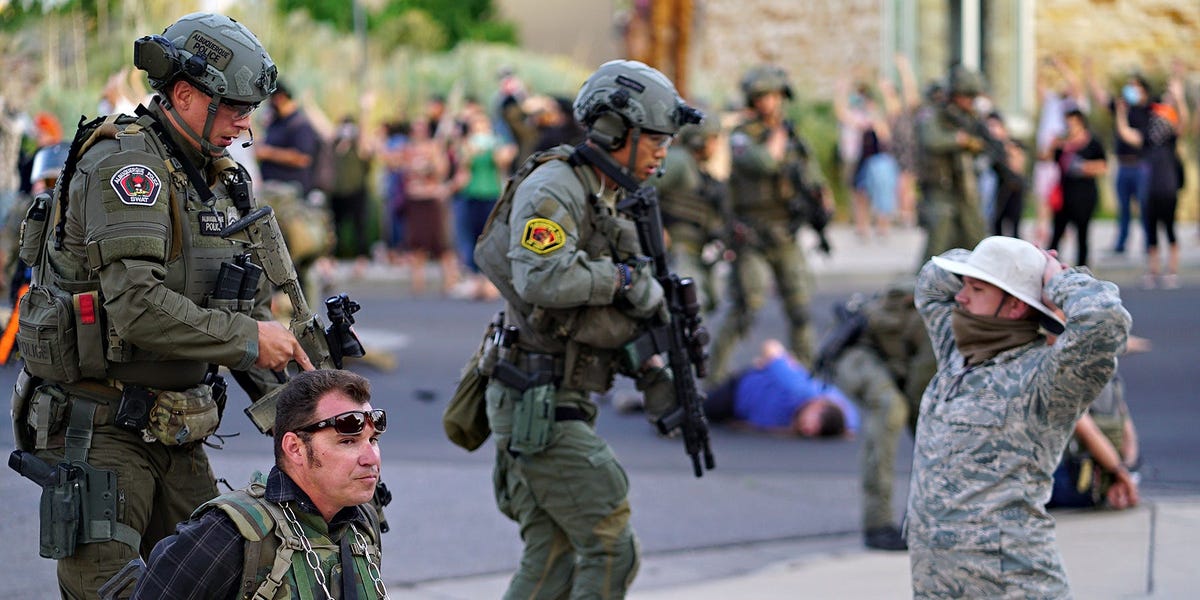 Prosecutors said Facebook deleted crucial evidence when it shut down the accounts of a New Mexico militia group during a crackdown on extremist groups, The Washington Post reported.

In August 2020, Facebook announced the New Mexico Civil Guard was removed from the platform.

Business Insider’s Charles Davis previously reported that the right-wing vigilante group’s leaders include “a neo-Confederate with a swastika tattoo and a self-styled ‘national anarchist’ with a history of denying the Holocaust.”

The Post reported that in June 2020, a group of men dressed in military-style camouflage confronted a group protesting a statue of a Spanish conquistador in Albuquerque, when one protester was shot and wounded.

The outlet reported that prosecutors accused the New Mexico Civil Guard of starting the violence even though the alleged shooter was not a member of the militia group.

On Monday, Bernalillo County District Attorney Raul Torrez filed a petition in California, where the social media network is based, asking a judge to force Facebook to hand over information about accounts created by the militia.

Prosecutors want information that could help them identify members of the group, Torrez said at a news conference on Monday.

“Facebook is asking Congress and the American people to trust it to regulate extremist content on its platform and yet refuses to turn over basic account information about an identified extremist group that used that same platform to recruit, organize and direct its members to engage in unlawful activity,” he said in a statement.

Facebook said they don’t have that information since they removed the accounts, but have not signed a sworn affidavit to say they are unable to retrieve it, the Post reported.

“We find it hard to believe that a trillion-dollar company would be in a position where they would have deleted this information and have no way to retrieve it,” Torrez said on Monday

During the press conference, Torrez said if Facebook does delete all the information on extremist groups then it “begs the question of how Facebook intends to prevent members of this extremist group from opening new accounts in the future.”

Facebook did not respond to Insider’s request for comment at the time of publication but Andy Stone, Facebook’s policy communications director, told the Post that the company has ways for prosecutors to get information if they make requests in a timely manner.

“We preserve account information in response to a request from law enforcement and will provide it, in accordance with applicable law and our terms, when we receive valid legal process,” Stone said. “When we preserve data, we do so for a period of time, which can be extended at the request of law enforcement.”