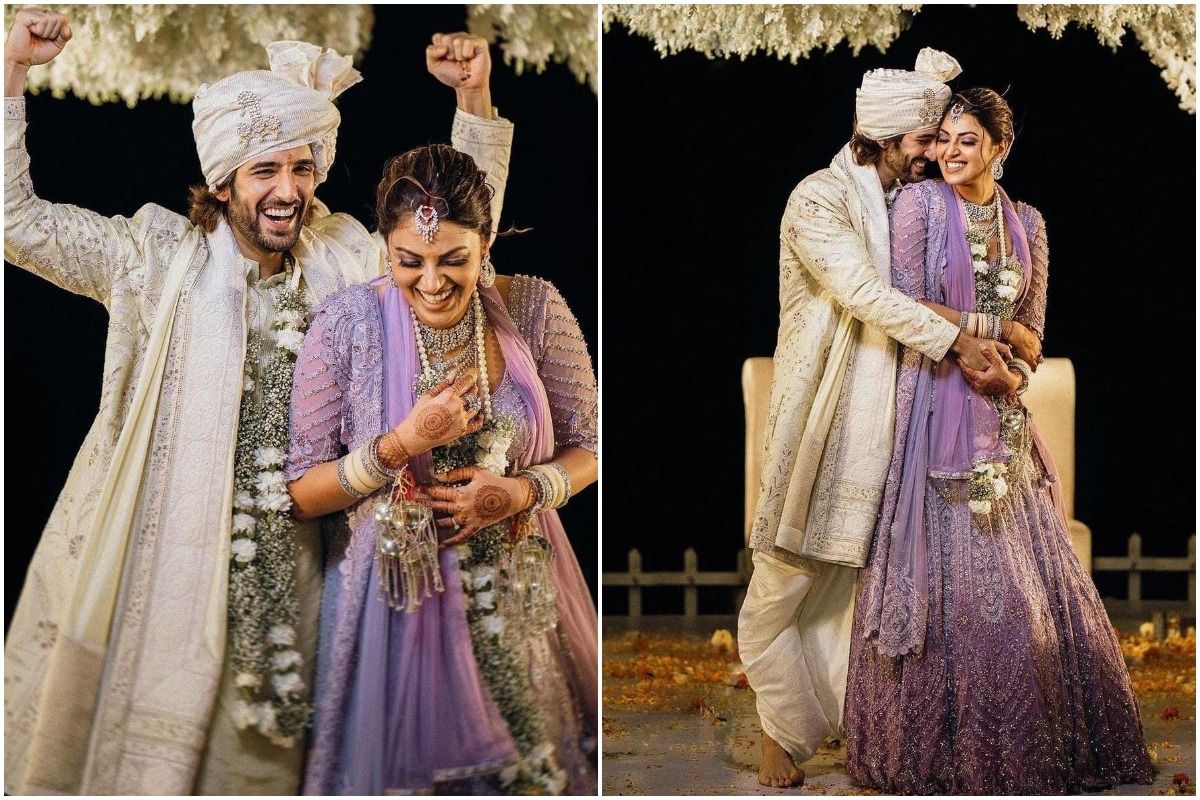 Anushka Ranjan and Aditya Seal Wedding: With the onset of wedding season, celebs are bringing out their inner fashionista and are putting their sartorial foot ahead. One such celeb to break the usual norm of red lehengas is Anushka Ranjan. Owing to the custom of a big fat Indian wedding, Anushka Ranjan and Aditya Seal had invited various Bollywood celebs to their wedding. Bringing in a fresh perspective on bridal wearing, Anushka Ranjan chose a lavender lehenga that felt like a breath of fresh air. Her lavender lehenga has garnered several appreciations as it took a different note on the whole concept of wearing red during the main wedding ceremony. From the shelves of ace Indian designer Manish Malhotra, this bride is all set to create a stir on the internet.Also Read – Anushka Ranjan’s Emotional Bridal Entry Proves Love is so Overwhelming – Watch Viral Video

The entire internet is set on fire with Anushka and Aditya’s wedding images. For the auspicious occasion, Anushka chose a quintessential lavender lehenga. Giving a vibe of simplicity, the lehenga is classy and all brides should take notes and hunt for a similar pattern. It is only during the wedding, one can bring their inner fashionista out. Her lehenga looks simple but it has intricate details. Her lehenga contains midriff with short choli, quarter-length sleeves, wide U neckline, heavy embroidery on the sleeves and sequinned tassels. Also Read – Aditya Seal-Anushka Ranjan Look Prettiest As They Tie The Knot and Fans Can’t Take Their Eyes Off | First Pictures

Ditching the conventional red, Anushka took a bold step of trying something new, which many did not agree with. It takes one unconventional step at a time to break the stereotype. Her lehenga is stacked with silver embroidery and heavy ghera. Along with this, she draped a sheer embroidered dupatta on her head. She chose her lehenga from Indian lehenga connoisseur, Manish Malhotra.

For accessories, she wore a statement diamond choker style necklace, earrings and maang tika. She finished the look with cream and silver bangles with silver kaleeras and hath phool completed jewels.

On the other hand, Aditya chose a cream embroidered kurta and dhoti set. He wore a matching bandhgala jacket, silk safa and a silk dupatta.