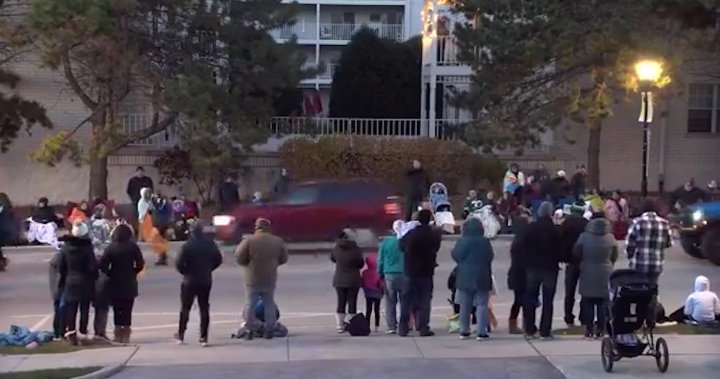 More than 20 people were injured in Waukesha, Wisconsin, on Sunday after an SUV crashed through a holiday parade, according to the local police chief.

Waukesha Police Chief Daniel Thompson said the area is now safe and they have located the vehicle involved, and there is a person of interest, though he didn’t give more details.

“A red SUV drove into our Christmas parade that we were holding downtown. More than 20 individuals were injured as a result of this incident,” Thompson told reporters.

A local CBS affiliate reporter tweeted that at least one person was killed.

Thompson said some of the injured were taken to hospital by ambulance, others police and some by family and friends.

Videos of the incident have flooded social media, showing the SUV moving through a crowd of young dancers and a marching band from behind.

One social media video shows police appearing to open fire at the moving vehicle after it crashed through a street barricade.

The Facebook live feed of the parade showed the vehicle speeding through and a person chasing it from behind.

The incident occurred shortly before 5 p.m., according to the Milwaukee Journal Sentinel. Waukesha is about 32 km west of Milwaukee.

“As we were walking back in between the buildings … we saw an SUV cross over, just put the pedal to the metal and just zooming full speed along the parade route. And then we heard a loud bang, and just deafening cries and screams from people who are struck by the vehicle,” Angelito Tenorio, an alderman in nearby West Allis, told the newspaper.

Police officers ran down the street, telling parade watchers to take shelter in stores, the newspaper said.
One witness said the driver hit the “Dancing Grannies” and at least one person flipped over the hood of the SUV, according to WISN-TV, an ABC affiliate.

Another witness estimated the SUV was going about 40 mph (64 kph) when it hit the crowd of people, the TV station said.

A woman told Fox6 TV station the SUV hit a dance team of girls between nine and 15 years old. She said the immediate reaction was silence, followed by screaming, running and checking on those injured, Fox6 reported.

Wisconsin Governor Tony Evers tweeted that him and his wife are “praying for Waukesha tonight and all the kids, families, and community members affected by this senseless act.”

“I’m grateful for the first responders and folks who acted quickly to help, and we are in contact with local partners as we await more information.”

-With files from Reuters