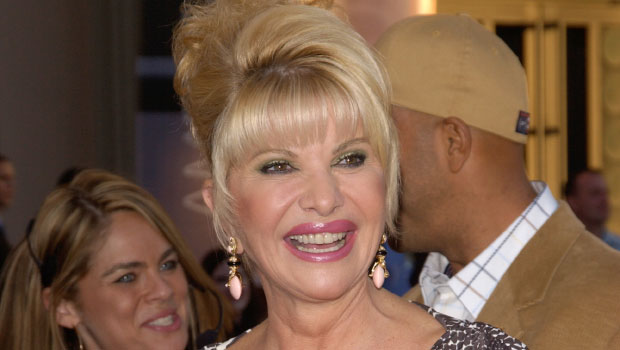 Ivana Trump‘s cause of death has been confirmed. The 73-year-old died after “blunt impact injuries of torso” in an “accident,” the NYC Office of Chief Medical Examiner (OCME) confirmed on Friday, July 15 to HollywoodLife. Donald Trump’s first wife was found unconscious at the bottom of a staircase in her New York City apartment per ABC correspondent Aaron Katersky, and an ambulance was called to her home for cardiac arrest.

Ivana was remembered by her ex-husband Donald in a tribute shared to his own Truth social media platform. “I am very saddened to inform all of those that loved her, of which there are many, that Ivana Trump has passed away at her home in New York City,” the former President of the United States penned. “She was a wonderful, beautiful, and amazing woman, who led a great and inspirational life. Her pride and joy were her three children, Donald Jr., Ivanka and Eric. She was so proud of them, as we were all so proud of her. Rest In Peace, Ivana!” he wrote, referencing their three children.

Ivana was born in Czechoslovakia (now-Czech Republic) in 1949, and wed Donald in 1977 a year after meeting in New York City — marking her second marriage. She was first married to her ex-husband Alfred Winklmayr from 1971 to 1973. Following her union to Donald and move to the Big Apple, she went on to hold a number of high profile positions in the Trump Organization, including CEO of Trump Castle in Atlantic City and manager of the iconic Plaza Hotel, purchased by the company in 1988.

Just two years later, Donald and Ivana split — which marked the beginning of perhaps the most storied divorce in celebrity news history. The settlement took years, and spurred a flurry of headlines. Eventually, Ivana — who became a successful costume jeweler for QVC — walked away with $14 million, a ritzy apartment inside the Plaza Hotel on the Upper East Side, and more.

After Donald, the Raising Trump author went on to walk down the aisle twice more: she married Riccardo Mazzucchelli, now 79, in 1995, but the two went their separate ways by 1997. She most recently married Rossano Rubicondi in 2008, but the union lasted just a year. Notably, Rossano died at just age 49 in October 2021.

Ivana Trump’s Kids: Everything To Know About Her 3 Children With Donald Trump

Ivana was also eulogized by her children on social media. Ivanka shared a deeply emotional tribute, saying she was “heartbroken” on July 14. “Mom was brilliant, charming, passionate and wickedly funny. She modeled strength, tenacity and determination in her every action. She lived life to the fullest — never forgoing an opportunity to laugh and dance,” the 40-year-old former presidential advisor wrote, alongside several photos of the two together. “I will miss her forever and will keep her memory alive in our hearts always,” she also said.

Eric and Donald Jr. issued a joint statement shortly after her death was confirmed. “Our mother was an incredible woman — a force in business, a world-class athlete, a radiant beauty, and caring mother and friend. Ivana Trump was a survivor,” they said to ABC News. “She fled from communism and embraced this country. She taught her children about grit and toughness, compassion and determination. She will be dearly missed by her mother, her three children and ten grandchildren.”