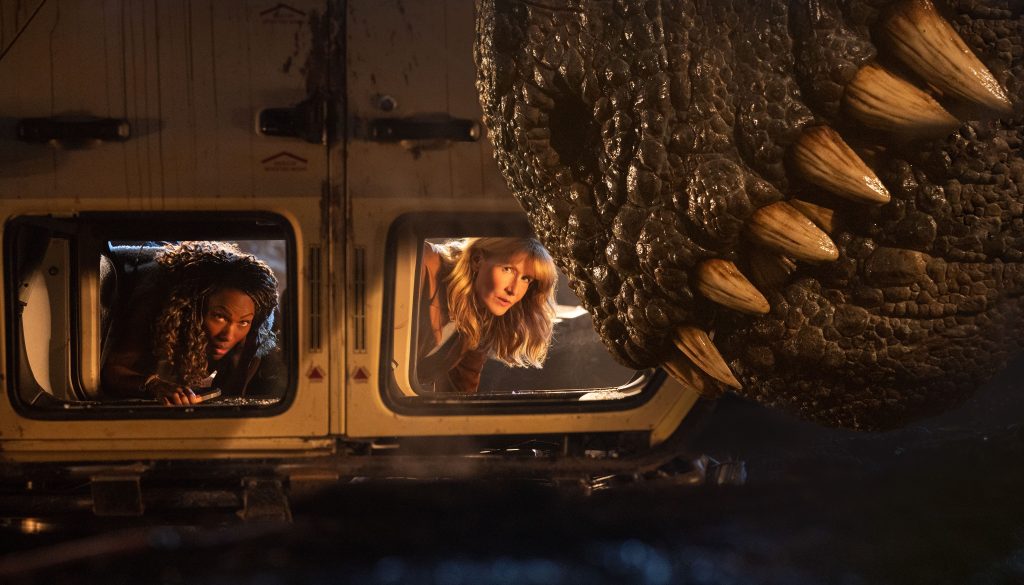 SATURDAY AM UPDATE: Refresh for more analysis and chart Now this is a box office feat to be applauded. The worst reviewed Jurassic movie of all time, Jurassic World Dominion, is topping all expectations with a $142.1M opening, that’s only 4% off the debut of the last movie, Fallen Kingdom, which opened to $148m. More hooray: Dominion posted the second best opening day for a Jurassic movie with $59.55M, behind 2015’s Jurassic World ($81.9M) and ahead of Fallen Kingdom‘s $58.5M first day. Again, that $60M includes the $18M in previews.

Typically threequels, which arguably this is in the latest Jurassic generation sequence, go down in their openings. In addition, audiences love this one enough with an A- CinemaScore, which is the same grade that 2018’s Jurassic: Fallen Kingdom received. Comscore/Screen Engine exits were harder at 3 1/2 stars and 73% and 57% definite recommend. (vs. Fallen Kingdom‘s 82%, four stars).  The under 12 crowd love the movie more than the adults at 92% positive and a 69% recommend.

Also, nowadays, especially pre-pandemic, we hardly spotted this box office trend, where a significantly panned tentpole by critics actually exceeds at the box office. Yes, yes, this use to happen all the time during the early aughts, meaning pre-Rotten Tomatoes. Popcorn movies and critics were mutually exclusive. But in the current era, Rotten Tomatoes’ critical ratings do dilute box office results on several types of films.

On PostTrak, 43% of the audience said they came

Dominion drew 54% guys, close to half from the moviegoing demo of 18-34. Those under 17 repped 15%. Diversity demos were 41% Caucasian, 25% Hispanic and Latino, 16% Black, and 15% Asian and 5% other. Imax and PLF are powering 36% of tickets sales to date. The West and the Southwest are the strongest territories. Fallen Kingdom was 56% under 25, Dominion is 41% currently, which means the core fanbase just got older.

A great win for Universal and exhibition overall here. Uni, despite serving movie theaters with 30 titles this year (that includes Focus Features) hasn’t exactly been on a hot streak gross wise with Ambulance, The 355, Downton Abbey – A New Era, but Jurassic is a reminder that that they still got the IP goods. What to do now? Keep making Jurassic movies, but clearly make them better, which arguably Universal has been able to do with the Fast & Furious movies.

And as we heard heading into the weekend, the dinosaurs aren’t doing any damage to the jets as Paramount/Skydance’s Top Gun: Maverick is seeing a third weekend of $50M, -44% (Doctor Strange in the Multiverse of Madness eased -48% in its third weekend). By Sunday, Top Gun 2 at $393.3M will only be $4.7M from taking over Doctor Strange 2, that pic in its sixth weekend. Wow.

FRIDAY AFTERNOON UPDATE: Jurassic World Dominion looks to be critic proof against all those bad reviews with a $55.5M opening day and projected $132.5M 3-day at 4,676 theaters. If that holds, it will be the third best start for Jurassic movie after Jurassic World ($208.8M) and Jurassic World: Fallen Kingdom ($148M). That first day includes those $18M in previews.

RelishMix says that the social media chatter “runs mixed-positive” with “a tone of urgency from Jurassic brand-fans who are dying to see the story of the reunion of lead cast members and the techno-VRF evolution of Spielberg’s 1993 masterpiece. Critical hecklers think that the show has jumped the shark, as an odd social warning of how this incarnation will derail as an ‘over produced spectacle’ — which sounds exactly what fans are ready for.”

RelishMix adds, “Reactions suspect spin-off are in the works in other forms, maybe recasting, but that the brand is too large to kill-off. Reaction spots have also fully deconstructed the project over six months from the prologue spot that was dropped in November 2021 — and point out the story accuracy, believability and how in-accuracies are part of the fun with these films.”

Universal dropped three select videos on the Universal YouTube growing to 6.2M subs — but also on the Jurassic World YouTube channel with an additional 1.76 subs for the brand with a notable set of 41 videos, dropped since the five-minute prologue spot in November last year. Materials have fueled over 515 earned and owned videos including reviews, trailer-reposts, reactions and clip reels for the franchise driving 459.8M views and counting — compared to the last movie with 409M views. Many key performance indicators are indexing well with TikTok videos at 107.5M views plus 84.1M views on Facebook, 3.7M on Twitter and 2.6M views on Instagram. Furthermore, the Super Bowl spot triggered 86.8M views in the 24 hours following the game, just behind Dr. Strange in the Multiverse of Madness which had 92.1M views.

Disney’s Doctor Strange in the Multiverse of Madness is third at 3,345 with a $5M sixth weekend, repping a 45% decline and running total of $398M.

Again, the bulk of that preview figure was earned last night.

Jurassic World Dominion is suffering the worst reviews of the Jurassic franchise at 34%. Typically, the dinosaurs have been able to survive that at the box office, but we’ll see if that $125M opening projection can keep up. The previous installment, 2018’s Jurassic World: Fallen Kingdom, which also endured bad reviews at 47% Rotten, filed a $148M opening, down from the franchise high of the 2015 film’s $208.8M. We’ve come to learn that Dominion cost a net $185M before global marketing and distribution spend. Audience scores on the last two Jurassics defeated any naysay from the critics with Jurassic World earning an A, and Fallen Kingdom an A-.

2015’s Jurassic World earned $18.5M in previews that began at 7PM before generating an $81.95M opening day; however, that was spurred by fans appetite for the first Jurassic movie in 14 years. Fallen Kingdom, after Thursday 7pm previews at 3,600 theaters, did $15.3M before earning a $58.5M first day.

Industry analysts believe that Jurassic World Dominion won’t bite into Top Gun: Maverick‘s third weekend hold, which is expected to be between $45M-$50M. Essentially, the latter is more older-skewing, while Dominion looks to gobble up families.

The sixth Jurassic movie expands to 4,676 theaters today, including 3D, IMAX and other premium large format screens. Disney will absorb all of those format next weekend for Pixar’s Lightyear.

We’ll have more updates for you as they come.