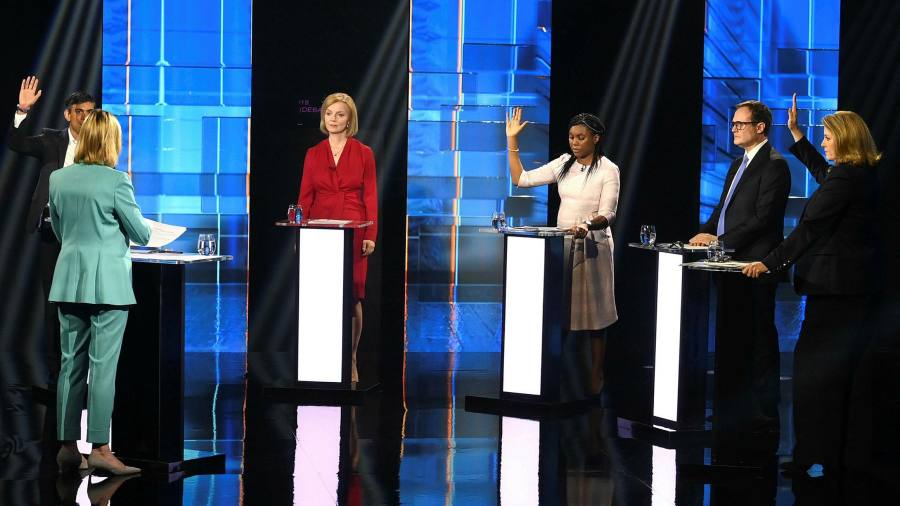 July has become a month for unexpected plebiscites. First there is the mind-boggling: the UK’s ruling Conservative party allowing a vote of confidence in itself on Monday. This “sideshow” as the FT’s parliamentary team labelled it last week, certain to be won by the ruling party, is best seen as an effort to instil unity among Tory MPs after the tumultuous implosion of Boris Johnson’s premiership.

Which brings us on to “Super Monday”, a clutch of hustings and another vote to further whittle down the pack of Tory MP hopefuls seeking to be the new leader — and hence prime minister — after this weekend’s television debates. You can keep track of events via this FT page.

Once they get to the final pair, expected on Wednesday before the summer parliamentary recess, the party’s national membership will get the final vote, enabling a new leader to be in place by September 5. Prepare for a summer of glad handing and media appearances, and no doubt some leaks and smear stories, from the two rival camps in what has already been a highly competitive contest.

In Sri Lanka, parliamentarians will on Wednesday elect a new president to replace Gotabaya Rajapaksa, who fled the country after protesters stormed his palace before resigning last week. Whether this will quell the anger over food shortages and rampant inflation is yet to be seen.

There is one election that was expected this week. India’s parliament will decide the country’s new president. The winner — due to be announced on Wednesday — is expected to be veteran politician Draupadi Murmu since she enjoys the backing of Prime Minister Narendra Modi’s Bharatiya Janata party. But maybe this will be an another unexpected election story.

Back in the UK, and back to the regular diary of July events, Nadhim Zahawi will be addressing City dignitaries with the annual chancellor’s Mansion House speech. Zahawi has only been chancellor for less than two weeks and might not long be in his role once his party’s new leader is decided, but he is expected to make headlines by unveiling a loosening of City regulations to make it easier and faster for companies to raise money in the Square Mile.

Talking of things expected, the British summer of discontent hangs in the air like the country’s sweltering temperatures. Barristers, postal managers and brewery workers are all planning walkouts this week.

Finally, there will be the return of an event that has not happened “in person” since the 2020 pandemic lockdowns: the Farnborough Airshow. Unusually, for an international gathering of aerospace executives, organisers decided to advertise the event’s return on the side of a bus. Hopefully, this does not mean that the air displays will instead be that very British of transport solutions, the replacement bus service.

The two i’s — inflation and interest rates — will be back in the public eye, with attention focused on the meeting of the European Central Bank’s monetary policy committee.

The week will end with another setting of international comparators with the purchasing managers’ index data reports.

We are in the thick of the current earnings season with the rest of the big US banking pack reporting plus a smorgasbord of tech, media, automotive and healthcare companies.

Also, on Monday, shares in Haleon are scheduled to start trading on the London Stock Exchange, completing the consumer healthcare companies demerger from GSK, with the parent company’s blessing. Haleon, whose brands will include Sensodyne toothpaste and Advil and Panadol painkillers, is expected to seek a valuation of as much as £45bn.