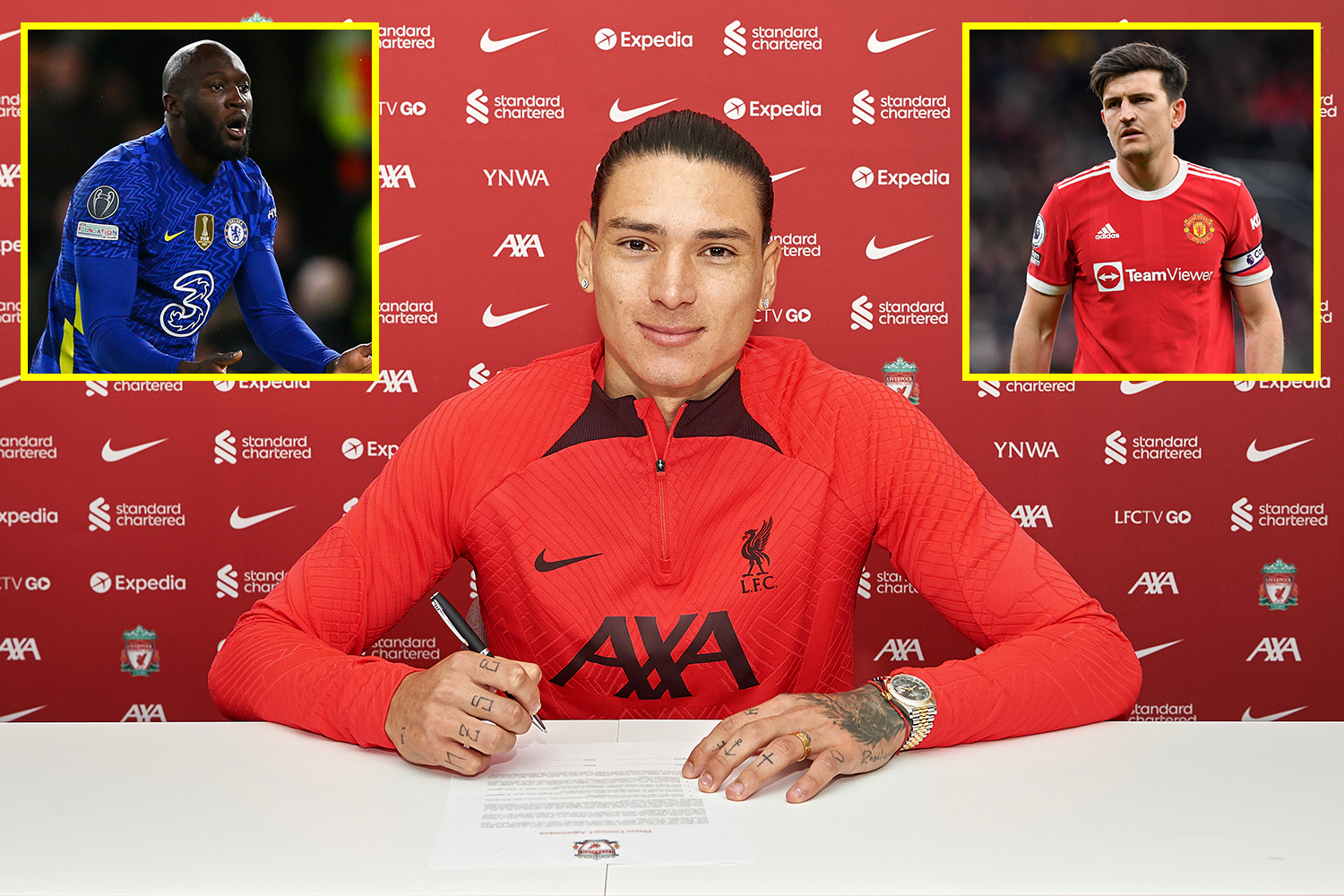 It’s hard to find much fault in Jurgen Klopp’s transfer activity at Liverpool, but by paying top dollar for Darwin Nunez he is wandering into territory that few escape from.

The Uruguayan’s total fee could reach a club-record £85million, should he achieve his targets at Anfield, which reports claim are all easily attainable for the hotshot striker.

That number would put him fourth on the list of the Premier League’s most expensive signings, in company that he will desperately be seeking to outperform.

In fact, Liverpool are one of the only sides to spend such huge sums of money and it turn out well.

Looking at the other names on the ten-man shortlist, however, the law of averages suggests that Nunez may struggle to live up to his price tag.

But who are the names, and how bad were they? Well, talkSPORT.com is here to run you through the Premier League’s top ten most expensive signings – excluding Nunez – ranked from the best to the very worst.

Unarguably the best signing on this list, Van Dijk’s transformative move to Liverpool turned Klopp’s side from title contenders to title winners, collecting every club trophy on offer since his 2018 arrival.

Many were surprised when the Reds made the Dutchman football’s most expensive defender, but any dissent has been wiped away after a second-placed Ballon d’Or finish in 2019.

Chelsea’s striker curse since Roman Abramovich’s 2004 purchase of the club was only ever properly alleviated by one man – Diego Costa. So, thankfully for Havertz, he’s not an out-and-out No.9.

Perhaps surprisingly, though, that’s where the German has done his best work under Thomas Tuchel, displacing Romelu Lukaku for much of last season… but more on him later.

Sticking with the German ace, for now, Havertz has almost paid off his transfer fee by scoring the Champions League final winner in 2021, and plenty more key goals have followed.

And still at 23 years old, there’s plenty more to come.

While things haven’t gone swimmingly so far for England’s record signing, Grealish has won a league title, and is far from a write off as a signing.

Three goals and three assists is a drop off from the 26-year-old’s impressive numbers at Villa, and he himself has expressed difficulty coming to terms with Pep Guardiola’s football.

it’s still early days in the new system, though, and if he gets it there’s little doubt he’ll perform far better than most names on this list.

It’s hard to forget after such a poor season, but Sancho was undoubtedly one of the world’s very best young players before joining United last summer.

In his three seasons before leaving the Bundesliga, the England international registered a whopping 37 goals and 41 assists in 92 games, fully justifying his price tag.

He’s done little to continue that since returning to England, though, but with a new manager and potentially a newfound stability under Erik ten Hag, he’ll surely start providing again.

It was hard to see Lukaku’s move to United going wrong after scoring so many goals for Everton, but leaving after just two seasons wasn’t what was required.

The Belgian did score 42 goals in his time at Old Trafford, though, showing that while he didn’t fully live up to expectations, he wasn’t a complete disaster in a Red Devils shirt.

A season from hell has destroyed any good will toward United’s captain, but it’s easy to forget he earned that role after a fine start to his career in Manchester, which has since unravelled.

The England defender has been key for his country and was key in leading his club side to a second-placed finish in his first campaign at Old Trafford.

He solved many ills upon his arrival, and there will be hopes he can get back to that level, regardless of how bad this season was.

The happy ‘Pogback’ reunion of 2016 has now ended in another sad divorce, with three trophies picked up along the way ending far below expectations.

Pogba was the world’s most expensive player at his time of arrival, and so while a Europa League title and Carabao Cup isn’t an awful return, it’s surely not the trophy haul United expected when they landed their big-money man.

Despite the almost constant grief he endured in a United shirt, he didn’t prove to be completely useless – staying for six seasons with some moments of brilliance – although they are regrettably largely forgotten due to his sorry ending.

Still the world’s most expensive goalkeeper, Kepa’s career has almost been non-existent since his infamous moment of dissent in the 2019 League Cup final when he defied Maurizio Sarri’s orders and refused to leave the pitch.

Things have been made so much worse for the Spaniard by Edouard Mendy’s imperious form, winning trophy after trophy for club and country after sending Kepa to a permanent spot on the bench in 2020.

And it appears there’s little room for a return for Kepa, who was the only player to miss from the spot as Chelsea were beaten by Liverpool in the Carabao Cup final on penalties this season.

Unlike every other club on this list, it’s rare that Arsenal spend so much on a player, and it’s even rarer that one fails so spectacularly.

A lot was expected with the Ivorian linked to a number of top clubs, with Arsenal seemingly winning a competitive race, which they may well now wish they hadn’t.

The winger has shown the odd moment of brilliance racing down the touchline, but has become the Gunners’ least important player, despite being their most expensive, dealing a critical blow to a club that rarely spends so much.

Lukaku may well have ended the season as Chelsea’s joint-top scorer in all competitions but that doesn’t deflect from a real story of utter disaster.

On fire at Inter Milan in his two Serie A seasons, the Belgian continued that with four goals in four games on his Chelsea return, and was being announced as the missing piece.

Unfortunately though, that was essentially that, with Lukaku completely losing his finishing touch.

He soon made his way out of Tuchel’s plans, and then talked up a return to Inter, which now looks plausible, just a year after the Blues broke their transfer record to bring him back to Stamford Bridge.