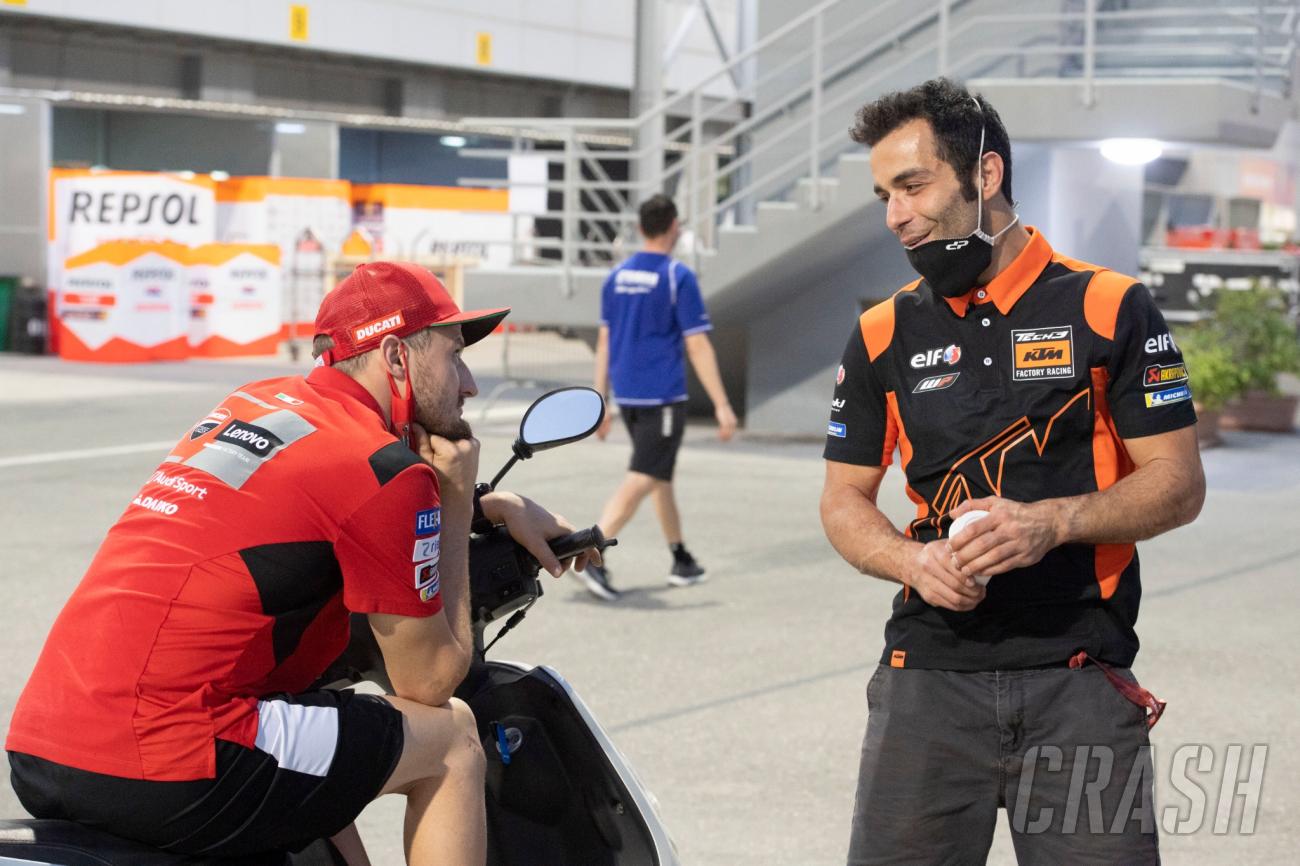 Miller and Petrucci soon bonded as team-mates at Pramac Ducati in 2018, where the Australian arrived after spending three seasons with satellite Honda teams.

Petrucci began that year strongly on the latest spec bike, including second place in France, and was duly picked as Jorge Lorenzo’s successor at the factory Ducati team for 2019.

Miller remained at Pramac, but inherited Petrucci’s factory-spec bike, which he rode to five podiums and matched Petrucci’s eighth overall from the previous season.

Although Petrucci had taken an emotional debut MotoGP win for the official team at Mugello, his future position was in doubt after being without a podium throughout the second half of 2019.

The covid delayed start to 2020 meant Ducati then made the call to sign Miller in Petrucci’s place for 2021 before a racing lap had been completed. Petrucci bore no bad feelings and, after a second and final Ducati win at Le Mans, moved across to KTM.

Newer miss a video from

Miller, who has so far matched Petrucci’s two wins at the factory Ducati team, will now once again follow Petrucci’s career path by joining KTM next season – albeit in the form of a two-year deal at the factory team, rather than Petrucci’s single year placement at Tech3.

While Petrucci endured what would be a difficult final MotoGP campaign on the RC16, persistently losing time on the straights due to his physical size, the current MotoAmerica title leader feels Miller will be a better situation for several reasons.

In an exclusive interview with Crash.net, Petrucci, who stunned the motorcycling world with a Dakar stage win for KTM earlier this year, said of Miller’s deal: “Two days ago, I sent Jack a message saying that now we can also participate in the Dakar together!

“But jokes apart, I’m really happy for Jack. We grew up together in Pramac and then we followed more or less [the same path]: Pramac, Factory [Ducati] and now also KTM. And I hope he will be more lucky than me.

“Being in the factory KTM team for two years is a much, much better opportunity. I’m happy for him. It’s not a secret that I am cheering for Jack in MotoGP. I would like to see him winning, because he’s a really good guy. And I think he will do well.”

Petrucci: ‘I tried to steal them from Ducati!’

Adding to Petrucci’s optimism is the presence of Fabiano Sterlacchini, who rose to a senior technical position during 17 years at Ducati before becoming MotoGP technical director at KTM, and Francesco Guidotti, former team manager of Pramac who now runs the Red Bull KTM squad.

Petrucci revealed he had been trying to tempt the pair to join KTM when he made the move.

“Now in [KTM] there are two people that helped me during my time at Ducati; Guidotti and Sterlacchini. I was one of the people that tried to steal them from Ducati when I was in KTM – unfortunately they came when I was leaving!” smiled Petrucci.

After staying with KTM for January’s Dakar adventure, Petrucci was welcomed back to Ducati for another new challenge, in MotoAmerica, where he is currently leading the standings for the Warhorse HSBK Racing team.

“After so many years in MotoGP, I still have a great relationship with most of the people I met in the paddock, including the KTM people and Ducati people,” he said.

“And I hope that in KTM they can do a good job for Jack for the next few years.”

Miller, presently ninth in the world championship, will start the first of his eleven remaining Ducati MotoGP races in Germany this weekend.