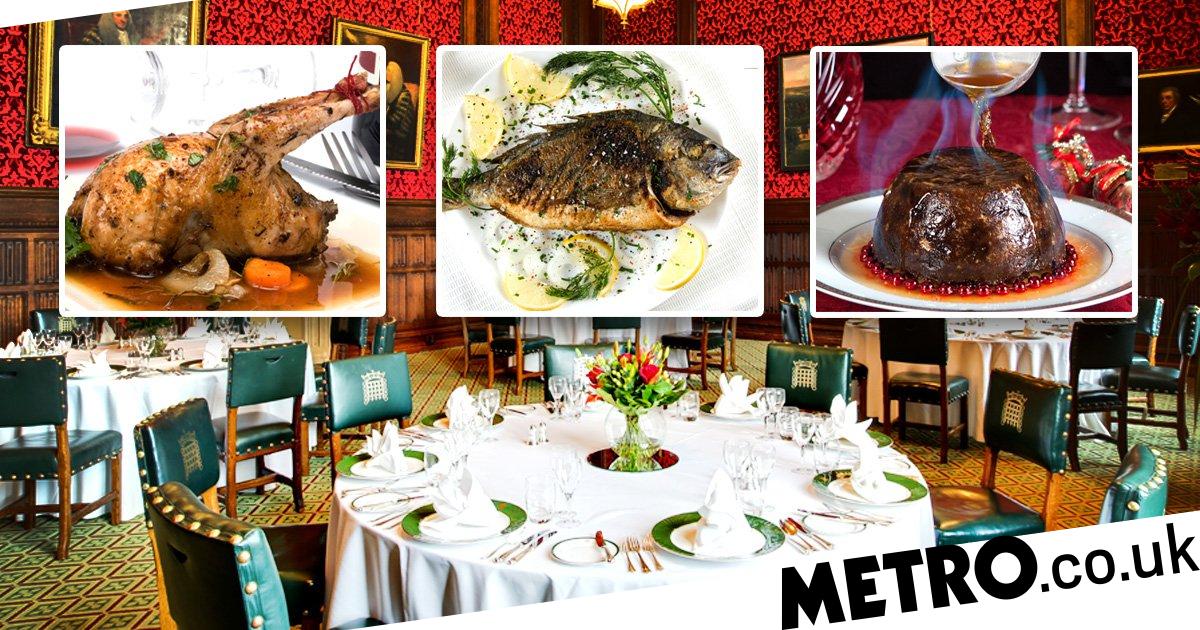 More than 70 partridges have been ordered in by the House of Commons for extravagant festive dishes at parliament this Christmas.

The birds are being roasted and served with chestnuts and buttered Brussels sprouts in a year when many are tightening their belts.

The Commons, which is charge of Westminster’s catering services, has also stocked up on 300 salmon portions and 11 guinea fowl.

Poached quails’ eggs and venison are also on the seasonal menus, with many dishes costing a snip of the price that the public will pay eating out.

A ‘Driving Home for Christmas’ cheese board and grilled gilt head bream topped with cranberry sauce are among the other choices.

The menus have been published at a time when MPs’ perks and behaviour are under intense scrutiny, including through the saga of the alleged Number 10 Christmas parties.

Much of the yuletide cuisine is cheaper than a pub lunch, despite being carefully prepared by the Commons’ catering services.

At the Strangers’ Dining Room – used by members and staff to wine and dine guests – traditional dishes include the Leicestershire turkey.

At the lower end of the price range there is the venison haunch semolina tart with truffle and bay potato espuma, redcurrant ketchup and juniper jus dust, priced at £7.63.

Afters include the Baileys crème brûlée with a chocolate cookie and coffee and vanilla-scented cream and the Commons’ traditional Christmas pudding with brandy sauce. To round off, there is the ‘Driving Home For Christmas’ cheese board themed on the route of the south-north A34.

At The Adjournment contemporary restaurant, which is near MPs’ offices in Portcullis House, dishes include the gluten-free Scottish smoked salmon with poached quail’s egg, star anise infused orange, shaved candy beetroot and watercress.

Three courses, plus coffee and petits fours, costs £23.95 – cheaper than Christmas Day lunch at Toby Carvery. Among the courses at The Adjournment is the roast partridge with buttered Brussels and chestnuts, glazed parsnips and natural jus.

At the Terrace Cafeteria in the Commons, festive dishes include the roast breast of turkey with sage, sausage and onion stuffing, cranberry sauce, turkey gravy and pigs in blankets. The helping is priced at £4.08. Also at a snip is the bacon steak and grilled halloumi with spinach and cranberries in a brioche bun and sweet potato fries for £3.34.

Afters include a Christmas pudding with a choice of brandy sauce, double cream or custard or two mince pies with the same toppings.

Bellamy’s self-service restaurant at 1 Parliament Street is serving grilled gilt head bream topped with cranberry and chive panko crumb on warm courgette and shallot salad with red wine reduction. The dish has the hallmarks of haute cuisine but is priced at £4.92.

The catering service is not directly subsidised but where overall losses are made the operation is effectively supported by taxpayers’ money.

The 2021 menus and ingredient details have been released at a time when the UK faces a cost of living crisis and food campaigners are calling for struggling families to be given more support.

Harry Fone, grassroots campaign manager at the TaxPayers’ Alliance said:
‘No one would dream of denying MPs a Christmas dinner but the costs shouldn’t be propped up by the public purse.

‘It’s time to spread some cheer and axe these out-of-date subsidies.’

Parliament’s catering service does not provide a subsidised service in the commercial sense of the word. Profits at some venues are referred to as ‘contributions’ because they offset overall costs.

At others, the cost of providing catering exceeds the income in sales due to the irregular hours and unpredictability of parliamentary business.

The performance of each cafe, dining room, restaurant and bar is monitored by the House of Commons.

A spokesperson said: ‘Christmas food at our catering venues is accessible to all passholders, including staff, contractors, visitors and members of the press gallery. The volumes served will be in line with demand.

‘The House of Commons continuously seeks to reduce costs and ensure there is minimal food wastage. In addition, our prices are regularly benchmarked against similar outlets outside parliament.’