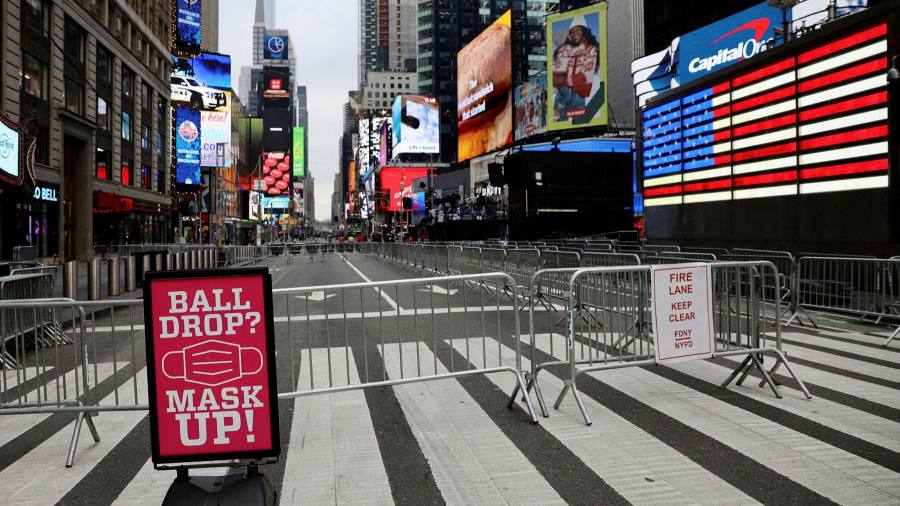 A record wave of Covid-19 infections propelled by the spread of the contagious Omicron variant has cast a cloud over New Year’s celebrations around the world, with partygoers urged to exercise caution in the face of soaring cases.

Despite hopes that 2021 would mark a return to normalcy after the pandemic shut down many celebrations last New Year’s Eve, many cities and countries either cancelled or scaled back planned festivities, while urging residents to limit the size of their gatherings.

London cancelled its New Year’s Eve fireworks display, but New York’s Times Square celebration will proceed even as infection rates in the city soar to record highs. Still, only 15,000 people will be allowed to attend the ball drop event, which typically attracts almost 60,000 from all over the world.

Guests must be vaccinated and wear masks to attend the outdoor event, though public health experts have questioned whether the event should go ahead at all. The event was closed to crowds in 2020.

Eric Adams will be sworn in as the city’s new mayor at the Times Square celebration shortly after the ball drops, after cancelling his indoor inauguration party in Brooklyn due to the surge of cases.

In New York state, the Covid-19 infection rate is more than twice the US average, with than 230 cases per 100,000 people, the highest since the start of the pandemic, according to an FT analysis of data.
Lines stretching several city blocks have become a common sight outside testing centres.

Experts have cautioned against large gatherings, as the seven-day average of new cases in the US soared to almost 350,000, its highest ever. San Francisco cancelled its fireworks, while Atlanta called off the Georgia state capital’s annual “Peach Drop”.

At a White House press briefing on Wednesday, Dr Anthony Fauci, Joe Biden’s chief medical adviser, said that for those planning to attend large gatherings with “everybody hugging and kissing and wishing each other happy New Year — I would strongly recommend that, this year, we do not do that”.

The New Year’s celebrations around the world began in muted fashion. Australia went ahead with its traditional fireworks display over Sydney Harbour Bridge and the Opera House, but the crowds were much smaller than usual after the country’s health authorities reporting a record 32,000 new Covid cases, the majority of them in the state of New South Wales.

Meanwhile, New Zealand, which has not reported any local spread of Omicron, did away with its usual fireworks display in Auckland in favour of a smaller light show.

In Germany, Olaf Scholz used his first New Year’s address as chancellor to push an ambitious drive to deliver 30m doses of Covid-19 booster shots by the end of January, as the country braced itself for an upsurge in cases of the Omicron variant.

Germany has introduced tight new contact restrictions to combat the spread of Omicron, putting a limit on the number of people who can attend social gatherings. “Tonight we will once again have to do without big New Year’s Eve parties or grand fireworks,” Scholz said.

France, where Covid-19 cases hit another record of more than 232,000 on December 31, had previously cancelled its traditional fireworks display in major cities, including Paris. Bars and restaurants will also have to close their doors at 2am, and dancing is banned in public venues. In the French capital and cities such as Lyon, people have to wear face masks on the street again.

But the French government shunned heavy-handed measures over the New Year period to contain the spread, including the widespread early evening curfews that were in force last year.

“The weeks to come will be difficult, we all know that,” Emmanuel Macron, the country’s president, said during a New Year’s Eve speech, adding that he was optimistic about the coming year and the possible end of the pandemic.

A traditional fireworks display at Rio de Janeiro’s Copacabana seafront will take place on Friday night, but unlike in past years there will be no live concerts on the beach.

Along with restrictions on entering the neighbourhood, authorities have also organised displays at other locations in the Brazilian city to avoid large crowds at Copacabana, which drew in an estimated 2.9m people to see in 2020.

While government figures show a rise in Covid-19 cases in Brazil, experts say the full extent is unclear, as certain databases that track the pandemic are not fully operational following a cyber attack on ministry of health websites this month. Dozens of other cities in Latin America’s most populous nation have cancelled official New Year’s Eve celebrations.

In a pre-recorded address, president Jair Bolsonaro criticised ‘vaccine passports’ and argued that children between the ages of five and 11 should only be inoculated against Covid-19 with a medical prescription and parental consent.

After Brazil’s health regulator approved the BioNTech/Pfizer shot for this age range, the government has opened a public consultation on the issue.

“Freedom must be respected,” said the far-right leader, who has downplayed the respiratory illness, disparaged the use of masks and railed against lockdowns in favour of keeping the economy open.

In South Africa, which is officially past the peak of its fourth Omicron-driven wave after avoiding a significant increase in deaths, “better times are on the horizon” in 2022, President Cyril Ramaphosa said in a televised New Year’s Eve address on Friday.

South Africans will be able to stay out after midnight to celebrate this New Year’s Eve for the first time since the start of the coronavirus pandemic, after Ramaphosa’s government ended a nightly curfew that had been one of the country’s last remaining major lockdown restrictions.

South Africa endured a heavy death toll from past waves in 2021 and “millions of families are struggling to put food on the table” in Africa’s most industrial economy, Ramaphosa said.

In downtown Dubai, thousands of people lined the streets to cheer a lights and fireworks show at Burj Khalifa, the world’s tallest building, despite the United Arab Emirates reporting 2,500 Covid infections on Friday, its highest tally since March. A group of young British women held hands and sang Auld Lang Syne amid a crush of men trying to take selfies with them.

Marcus and Mariana, a couple from Germany and Ukraine who had travelled to Dubai for New Year’s Eve, disagreed on whether they should take the pandemic seriously. “I’m not worried at all. It’s not as bad as in the news,” Mariana said. Her boyfriend interjected: “I don’t agree with this. We take care.”

At a club in a nearby hotel, Victoria, a tourist from Belgium, sipped cocktails with her girlfriends. She shrugged off the latest surge in cases. “I got Covid two months ago,” she said.