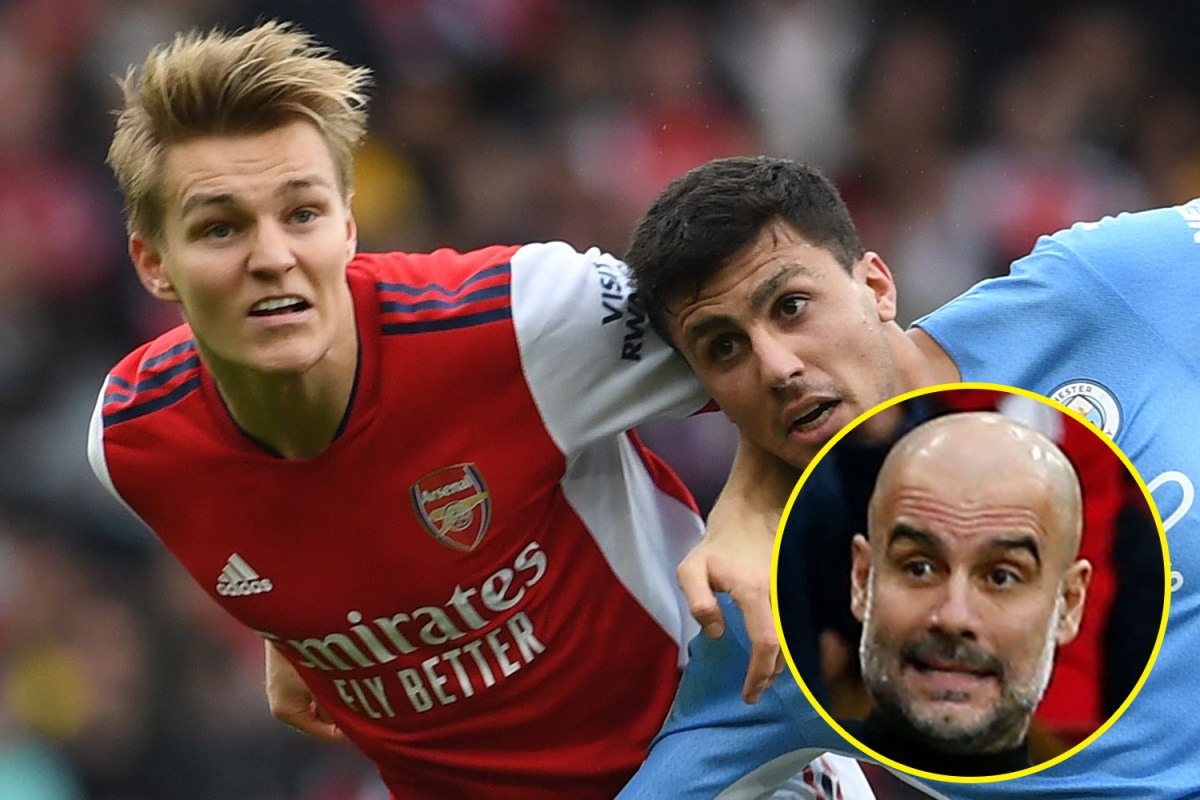 Pep Guardiola admitted Arsenal were the better team during their 2-1 defeat to his Manchester City side, while Martin Odegaard claimed the Gunners are close to reaching City’s level.

The Gunners had lost each of their previous nine league meetings against City, but outplayed the reigning champions in an impressive display at the Emirates.

Bukayo Saka’s opener just after the half-hour mark gave Arsenal a deserved lead, but things unravelled shortly after the break.

City still failed to create despite playing with an extra man for over 30 minutes, and only registered two shots on target, the latter of which saw Rodri prod home a stoppage-time winner.

Guardiola was well aware of his side’s struggles, and labelled his opponents the better team – mainly due to extra rest.

“They were better,” the City boss admitted. “We faced a team that in the last years they’ve struggled to be in the top four.

“They started this season in the bottom and they are in the top four and they have six or seven days after the last game against Norwich.

“We have two days and a half and Brentford, was so tough, we came back to Manchester and we didn’t have energy, that’s why we tried to put one more player in the middle to have more control and more passes.

“In football we try to analyse many things but the coin sometimes falls down on your side, sometimes the other side, so that is the reality.

“In this period today we were incredibly tired so mental and physically they were better, Arsenal was better today.”

City failed to register a shot on target until Mahrez’s spot-kick, and arguably had some bad luck with a non-penalty call on Odegaard, and Gabriel Martinelli hitting the post too.

Odegaard himself was left frustrated with the result, but complimented his team’s performance.

“The feeling is not good,” the Norwegian said. “I think we played a great game, we managed to play our game, we put them under pressure, we created a lot of good situations.

“We scored the first goal and I felt like we controlled the game pretty well and then we had three situations that went against us so it’s hard to take.”

Last time Arsenal faced City in the reverse fixture back in August, they slumped to a humbling 5-0 defeat, seeing huge pressure put on manager Mikel Arteta.

But the 2-1 loss at the Emirates was a far more manageable defeat, with Odegaard saying it shows just how far his side have come in a short period.

“I think if you look at the progress from our first game against them until now it’s huge and we’re very close to being on their level,” he explained.

“We showed that in a lot of moments today in the game, and with 11 players I think we controlled the game.

“We were leading and I feel like we played a great game, even with 10 players we defended well and they didn’t create much before the last chance and the goal.

“We have to take the good things out of the game and keep going as we’ve improved a lot.”

The defeat sees Arsenal remain in fourth, but only two points ahead of Tottenham who have two games in hand, meanwhile Man City have extended their league lead to 11 points.