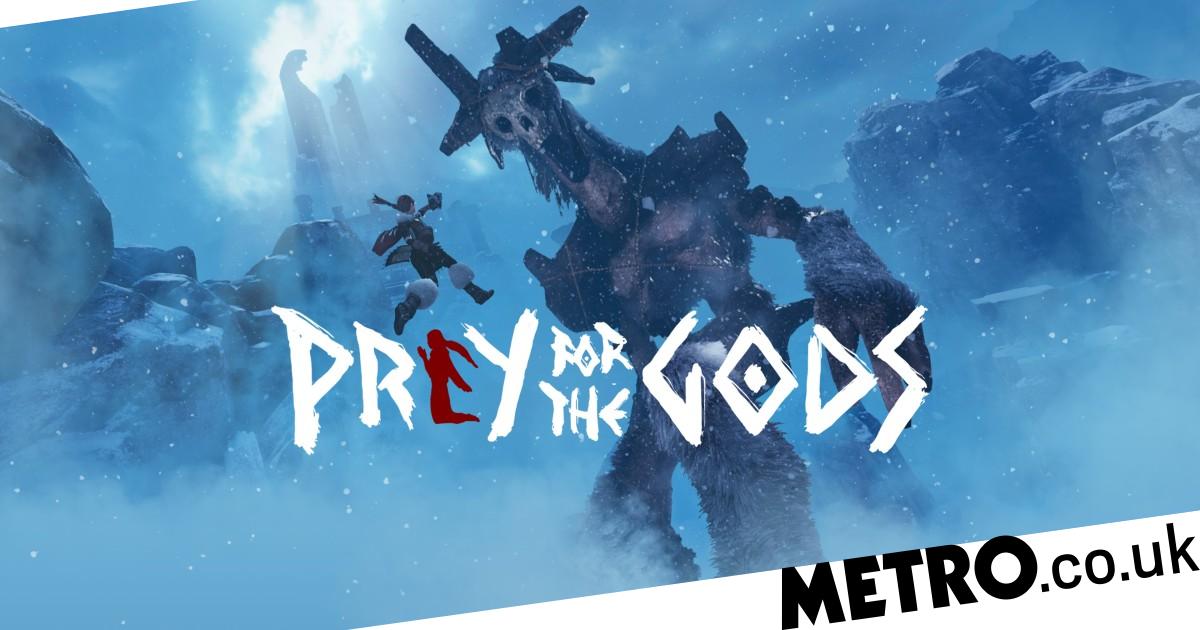 One of the last indie releases of the year combines the boss battles of Shadow Of The Colossus with the exploration of Zelda: Breath Of The Wild.

The release of Praey For The Gods is another useful opportunity to emphasise that not all indie games are imaginative, one-of-a-kind arthouse creations. A lot of them are uninspired, bandwagon chasing clones that are all but indistinguishable from dozens of other, similar games. Either that or they’re desperately trying to copy another, much more famous title.

If you’ve ever played PlayStation classic Shadow Of The Colossus then the moment the first boss battle starts up in Praey For The Gods you’ll realise just how shameless a copy this. Then there’s a moment a little later on where you collect a sail cloth you can use as a hang-glider, and you realise the game also really wants to be Zelda: Breath Of The World.

Big budget AAA games can be just as blatant in terms of where they take their inspirations from but the automatic defence for indie games is that they’re made by tiny teams of enthusiastic fans. In this case, Praey For The Gods is the work of primarily just three people, which is frankly astonishing given the scope and ambition of the game. Sadly though, that doesn’t do anything to make it an enjoyable game.

The story here revolves around an attempt to destroy eight god-like beings on a frozen island, which your Viking-esque main character has decided to turn up to wearing a short-sleeved top. This is more of a mistake than you first imagine, as the whole game works like the snowy areas of Breath Of The Wild, so that you’re constantly in danger of freezing to death, as well as dying of hunger and fatigue (fixed by going to sleep, but only if you can construct something to sleep on).

These survival elements extend to your equipment, all of which have a limited lifespan, even including things like the Zelda style hookshots. This whole aspect becomes almost instantly tiresome, as resources are in short supply and while there is an impressively large open world there’s nothing else of interest in it other than the gods, each of which operates like a giant boss battle.

You do encounter more minor enemies along the way but if you didn’t like the breakable weapons in Breath Of The Wild you’re going to hate this, as not only are they quicker to break but they do less damage the more broken they are, which means fights against even the lowest level of enemies can drag on for ages if they catch you at a bad moment. Even if you are well equipped though, the melee combat is unsatisfyingly vague and spongy, so you quickly learn to just avoid it if at all possible.

Shadow Of The Colossus is sometimes criticised for the fact that its open world has almost no other gameplay elements in it, beyond the boss battles themselves, which is strictly true but misses the point that the purpose of the landscape is to set the tone and atmosphere – not liberate enemy camps from an icon-filled map.

The visual storytelling of Shadow Of The Colossus’ map is far more compelling than staggering around in the cold, trying to shoot a stag with an irritatingly inaccurate bow and arrow, and Praey For The Gods would’ve been a lot better off without any of the survival elements at all.

The other complaint against Shadow Of The Colossus is its oddly frictionless controls, meant to emphasise that the main character is clumsy and inexperienced, and thoroughly out of his depth. That doesn’t seem relevant for Praey For The Gods’ main character but it’s hard to tell whether the game’s trying to emulate the same style of movement or if it’s just awkward and unresponsive by accident.

This means that, like Shadow Of The Colossus, everything comes down to the boss battles, which are… never as enjoyable as they should be. The majority are fairly well designed, with a reasonable amount of variety as you face relatively straightforward bipedal monsters and weirder creatures like a flying skeleton and a giant worm that has to be defeated by using special towers that rise up out of the ground.

No matter how you get there, all the bosses are defeated in the same way, by clambering over their bodies to activate strange, pneumatic devices that effectively act as an off switch. The problem is that the controls remain as glitchy and unpredictable when climbing a boss as anywhere else, as you repeatedly fall off for no obvious reason, even when you still have plenty of stamina.

This is made all the more aggravating because whenever you fall to the ground – whether fighting bosses or just clambering around the environment – you start a game of Russian roulette with the physics engine, that either sees you getting up in short order or endlessly flopping around on the ground like a beached Magikarp.

A plucky indie developer creating a game with just three people is all very admirable but at the end of the day this is still an expensive purchase whose many failings cannot be excused.

Praey For The Gods attempts to do far too much with obviously limited resources and the end result is a buggy, frustrating chore that at no point comes to close to doing anything as well as Shadow Of The Colossus, let alone bettering it. Like a bad pub tribute band, its only real accomplishment is making you appreciate the original even more.

Praey For The Gods review summary

In Short: An utterly shameless clone of Shadow Of The Colossus that comes nowhere close to mirroring the same level of grandeur and ingenuity as Team Ico’s classic.

Pros: Some of the boss designs are good in theory, even if the execution is off. The game’s still an impressive accomplishment for such a small team.

Cons: Glitchy, unresponsive controls bleed every ounce of entertainment out of the combat and exploration. The survival elements do nothing but frustrate, as do the large number of bugs.


MORE : The Gunk review – cleaning up the planet

For more stories like this, check our Gaming page.