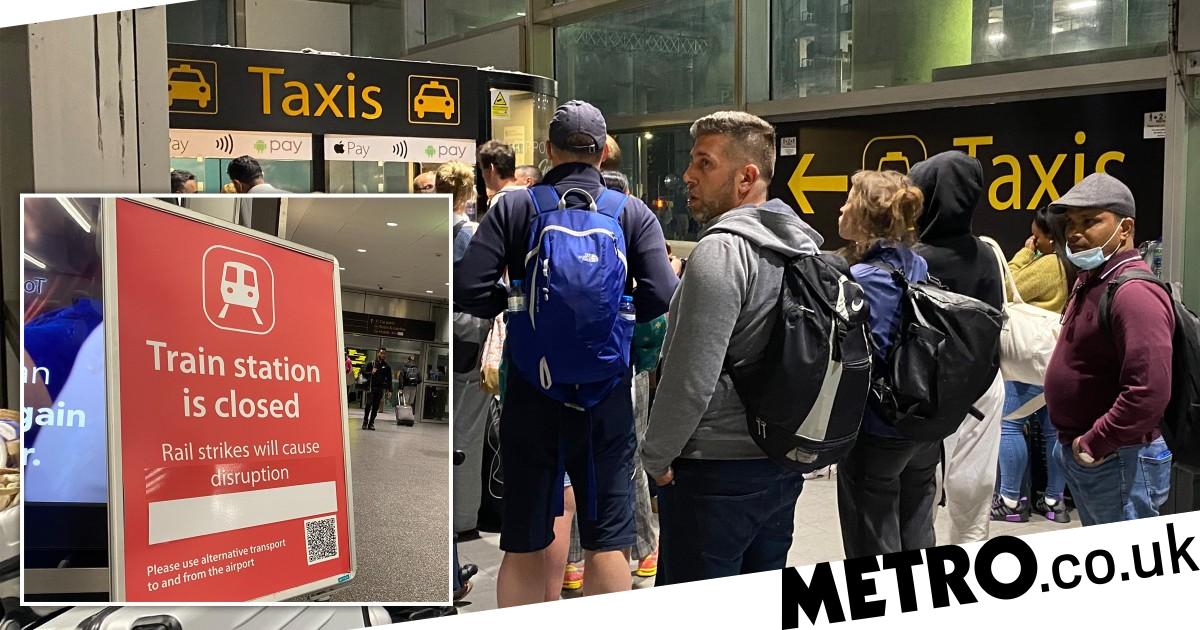 The travel chaos which is quickly becoming the new norm in Britain has continued this morning.

Hangover effects from yesterday’s rail strike have continued to impact passengers – and there’s more to come.

Workers at Network Rail and 14 operators walked out yesterday as part of a pay and conditions dispute which threatens to cause havoc for travellers all summer.

Train customers were warned to expect the disruption to last into this morning due to the knock on effect on shift patterns and train locations.

Yesterday’s strike – which ended at midnight – meant work to services ready for this morning was not carried out, extending the impact of yesterday’s action.

In London, some tube customers arrived at their stations to find they were still shuttered while the network recovered from the industrial action.

At Gatwick, customers were seen queuing for taxis as they landed to discover some rail services still weren’t back up and running.

Rail firm LNER, which runs the Scotland-London mainline up the east coast, warned of a host of delays and cancellations this morning due to signalling issues and driver shortages.

Talks between the RMT union and train bosses are expected to resume today but there are little signs a breakthrough is imminent.

A smaller strike will take place on Saturday, with train drivers from the Aslef union working for companies including the London Overground, Great Western Railways and Southeastern, signed up.

The union has also announced that drivers at nine rail companies are to stage a one-day strike on Saturday August 13.

The RMT and another rail union, the TSSA, will hold more strikes on August 18 and 20, while London Underground workers will walk out on August 19.

As the weekend approaches, all eyes will be on the Channel crossings and airports after weeks of problems.

Ports on the south coast ground to a halt last weekend as staff struggled to deal with a surge in summer demand while processing new post-Brexit document requirements.

Airports and airlines which laid off huge numbers of staff during the pandemic have struggled to get up to speed since the holiday industry sparked back into life.

Customers at some of the UK’s busiest airports have been warned to turn up three or four hours before flights are due to take off to make sure they get through security in time.