Rebel Wilson has responded after a social media backlash to an opinion article published the day after the Hollywood superstar revealed her new relationship.

The Australian actor announced her relationship with Ramona Agruma, a Los Angeles-based fashion designer, on Instagram early on Friday.

“I thought I was searching for a Disney Prince… but maybe what I really needed all this time was a Disney Princess,” she said, along with heart and rainbow emojis.

Then, on Saturday, a piece by Sydney Morning Herald journalist Andrew Hornery sparked a storm of online criticism, both on social media and websites around the world.

“In a perfect world, ‘outing’ same-sex celebrity relationships should be a redundant concept in 2022. Love is love, right?” Hornery wrote.

“As Rebel Wilson knows, we do not live in a perfect world.

“So, it was with an abundance of caution and respect that this media outlet emailed Rebel Wilson’s representatives on Thursday morning, giving her two days to comment on her new relationship with LA leisure wear designer Ramona Agruma, before publishing a single word.

Hornery said the “choice to ignore our discreet, genuine and honest queries was, in our view, underwhelming” while stressing who anyone dated was their business.

Wilson on Sunday night replied to a tweet sharing the article and criticising the opinion piece.

“It was a very hard situation but trying to handle it with grace,” she said, along with a love heart emoji.

“Our weekly Private Sydney celebrity column last week asked Wilson if she wished to comment about her new partner,” Shields said, in a note to readers.

“We would have asked the same questions had Wilson’s new partner been a man.

“To say that the Herald ‘outed’ Wilson is wrong.”

Shields said it was normal practice to include a deadline with questions sent to media representatives and Wilson’s response would have informed any decision about whether or not to publish.

He said the Private Sydney column often referred to the writer’s interaction with their subjects.

“Saturday’s piece followed that theme in giving readers insights into our interaction with Wilson and her PR team. This was not a standard news story. We wish Wilson and Agruma well.”

The SMH is published by Nine, which is also the publisher of this website.

For a daily dose of 9Honey, subscribe to our newsletter here. 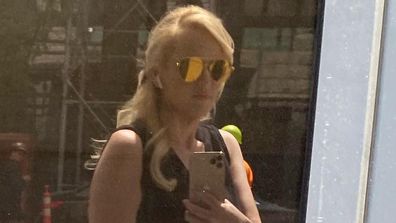 Rebel Wilson flashes her abs following her ‘year of health’