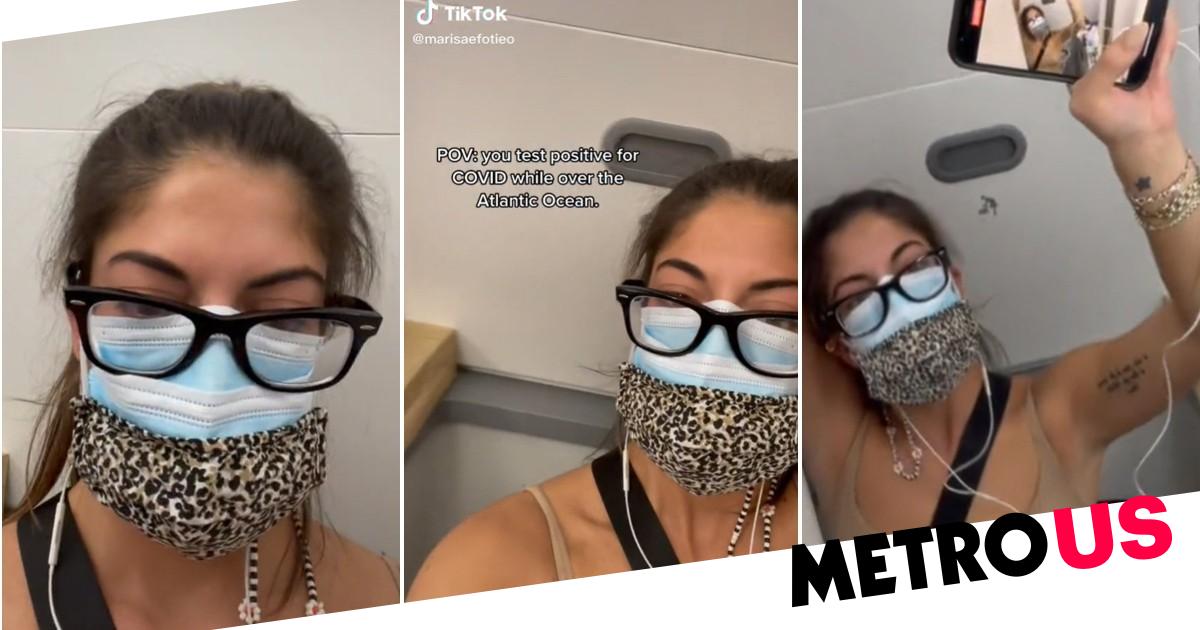 A teacher flying from New Jersey to Iceland shared video of herself quarantining for hours in the airplane bathroom after she found out she tested positive for the coronavirus in the middle of the journey.

Marisa Fotieo, who teaches early childhood education in Chicago, said her throat began to hurt about an hour into the Icelandair flight that had a layover in Reykjavik.

The West Michigan native said she had brought a few Covid-19 rapid test kits with her for the December 20 flight and went to the restroom to use one.

‘And within about two seconds, the test came back positive,’ said Fotieo, according to 13 On Your Side. ‘I freaked out and ran out of the bathroom and found the first person I could see. Luckily it was this amazing flight attendant named Rocky.’

Fotieo said the flight attendant, Ragnhildur ‘Rocky’ Eiríksdóttir, told her to wait in the restroom and helped her stay calm.

‘I could hear something over the intercom that said something about a passenger on board testing positive, and that it is very important for everyone keep their masks on as much as possible,’ Fotieo said.

The flight attendant then told Fotieo that the flight was full and did not have a seat where she could be distanced from fellow passengers.

‘There were like 150 people on board, so I said I would just stay in the bathroom for the rest of the flight,’ Fotieo said.

Fotieo passed some of the time by filming a video she shared on TikTok, that has racked up more than three million views.

She added that the flight attendant was ‘so sweet’ and brought her snacks and water and ‘told me that would be my own little space’.

Fotieo’s father and brother were on the same flight and tested negative upon arriving and continued the journey to Switzerland, NBC News reported. Fotieo, however, remained in Reykjavik for a 10-day quarantine. She stayed at the Red Cross Humanitarian Hotel.

‘I really think that in this new world we’re living in,’ Fotieo said, ‘Everybody just really needs to lookout for one another.’