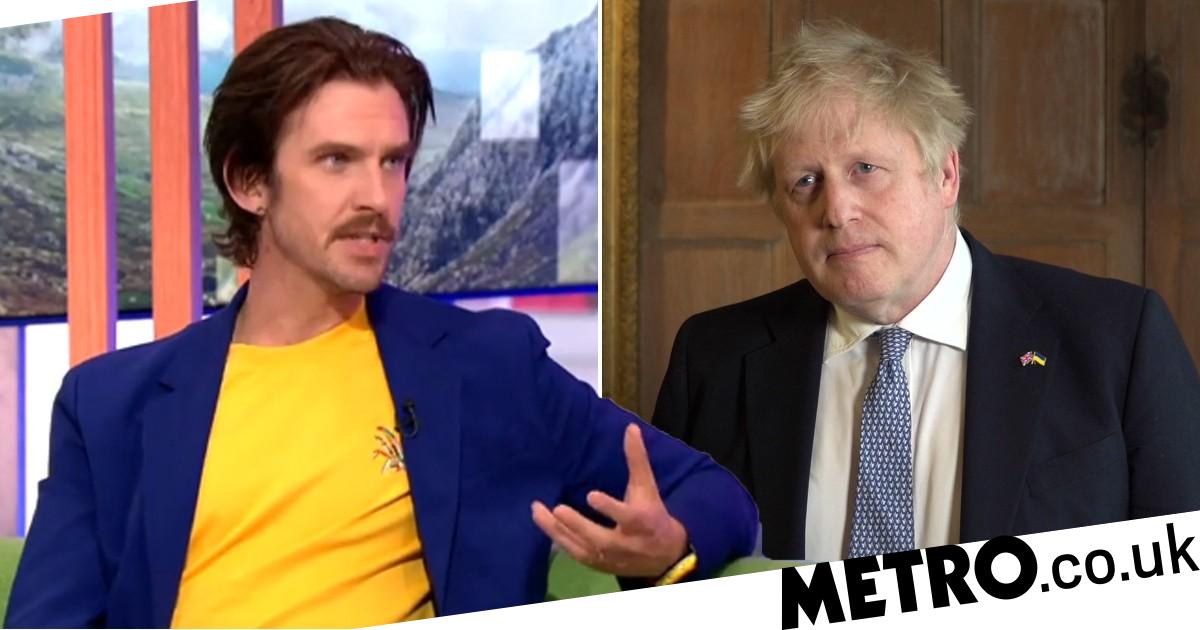 The One Show viewers hailed Dan Stevens as a real hero after taking a swipe at Prime Minister Boris Johnson.

The aftermath of the Partygate scandal noticed the Prime Minister and Chancellor Rishi Sunak fined for breaching Covid-19 guidelines, earlier this week.

The 39-year-old actor was joined by Derry Girls’ Saoirse-Monica Jackson and Jamie-Lee O’Donnell on Wednesday’s version of The One Show, to debate his upcoming drama collection Gaslit – which stars Hollywood royalty Julia Roberts and Sean Penn.

When presenter Alex Jones requested the star concerning the present’s premise, he mentioned: ‘Well what you’ve received is a felony for a pacesetter, who’s wrapped in a messy battle, embroiled in a silly scandal and surrounded by bold idiots and actually ought to resign.’

‘No I’m sorry that’s the intro to Boris Johnson, I’m so sorry,’ he added.

Safe to say that Alex and co-host Jermaine Jenas have been too shocked to talk after that.

However, followers just about applauded the controversial but courageous assertion and took to Twitter instantly.

One particular person wrote: ‘That was absolutely fabulous Dan Stevens, fab. U. Lus so funny. The deep breaths were….. breathtaking!’

‘Dan Stevens saying what most of us are thinking, on the One Show. Fantastic. Thanks Dan,’ one other enthused.

One particular person weighed in: ‘I’m sorry however Dan Stevens feedback on #TheOneShow about Bojo! Outstanding.’

Following the information, an inflow of celebrities from Piers Morgan to Rylan Clark have given their verdict on the state of affairs.

Broadcaster Piers tweeted: ‘Conservative MPs now have to decide whether they’re snug with having a law-breaking Prime Minister & Chancellor. Bottom line: why ought to the British public comply with any legal guidelines if these answerable for setting them so openly break them & hold their jobs?

Jeremy Vine weighed in: ‘If I was one of the two Leeds students fined £10,000 for organising a snowball fight while the #CovidRestrictions were on, I might be feeling a little aggrieved this lunchtime.’

Comedian Joe Lycett responded to Mr Johnson in his cheeky signature model, writing: ‘@BorisJohnson i dont care if u broke the law babe, i LOVE a bad boy lol 😂😂😂 xoxox.’

The One Show airs weekdays at 7pm on BBC One.

If you’ve received a celeb story, video or footage get in contact with the Metro.co.uk leisure group by emailing us celebtips@metro.co.uk, calling 020 3615 2145 or by visiting our Submit Stuff web page – we’d love to listen to from you.


MORE : Denise Welch doesn’t suppose Boris Johnson ought to resign over Partygate scandal as she rages in opposition to previous lockdown restrictions