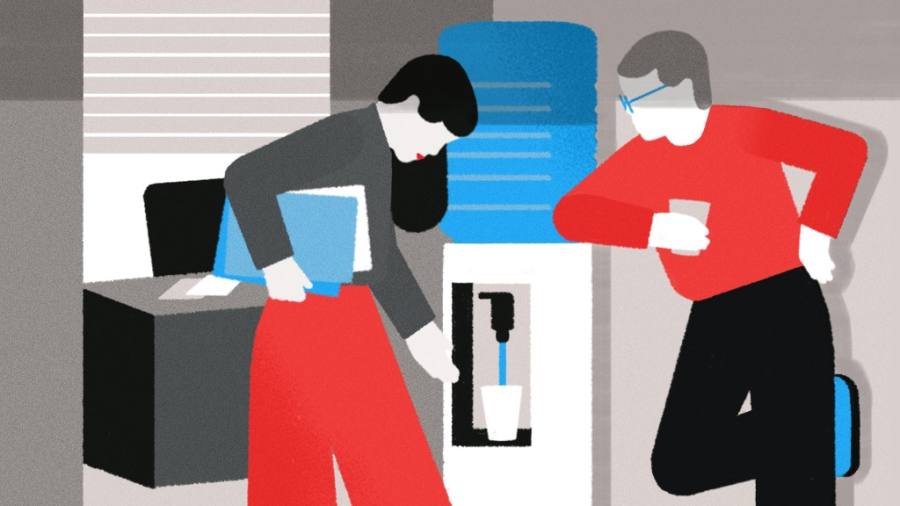 For the past few days, people in chat rooms across Japan have been grasping for a neat rendering of “boutto suru”: the state of sitting at a desk, staring off into space, unengaged, unproductive and, in this particular context, unsackable.

The term is currently circling in the ether because of a survey published by Shikigaku, a Tokyo-based consultancy, on the phenomenon of the hatarakanai ojisan, the old geezer (or, less commonly, his female equivalent) in the office who manages to get away with doing no work.

When asked if such a person existed in their workplace, 49.2 per cent of workers in their 20s and 30s at Japanese companies with over 300 employees affirmed that he did. Collectively, that’s an awful lot of paid daydreaming, but might it possibly be money well spent?

For many of those who took to social media to discuss the survey, the mild surprise was that the figure was so low. This zoned-out villain, in all his irredeemable indolence, felt universally recognisable and, often, easily nameable. “Staring into space”, along with “chatting about nothing” and “taking back-to-back snack, cigarette and toilet breaks” were by far the most common answers as to how his hours were skived away.

The survey, which polled 300 people across different industries, also showed strong agreement among younger workers on why hatarakanai ojisan exists: seniority-based pay structures and protective labour laws simultaneously erode his motivation, remove fear of dismissal and absolve him of the need to produce results. Incompetence may also mean nobody asks him to do any real work.

The tone of the Shikigaku research (versions of which could probably be conducted elsewhere in the world without wildly dissimilar results) was predictably negative and flavoured with plenty of intergenerational friction — most especially around hatarakanai ojisan’s dependence on juniors to pick up his slack.

But it does have a special resonance in Japan, where the working age population is now shrinking fast, and where investors see persistently low productivity gains at the heart of the country’s economic woes. For those extrapolating hatarakanai ojisan into a bigger corporate picture, he is symbolic of much that has held back governance reform — an immovable anchor to the old ways of doing things. The structures that keep him in place have a powerful bearing on how Japan takes its next steps.

The harm done by hatarakanai ojisan, according to the survey, is that he is demoralising: the pay structures of many Japanese companies mean that the non-working older colleague is reliably paid more for that status. What, for a younger worker, is the point in busting a gut if that effort stands no chance of reward? Deeper into the survey, respondents expressed a yearning for results-based pay increases and promotion — a change that would shift the measurement of white-collar labour from “hours seen to be working” to “actual output” and transform Japan’s workplace landscape.

In all of this, though, the anti-hatarakanai ojisan lobby must be careful what it wishes for. However frustrating this torpid time-server may be for his immediate colleagues, his days of inactivity are underwritten by the private sector rather than the taxpayer. Shareholders may hate it, but at least when Japanese companies talk about concern for “other stakeholders” there is a streak of honesty.

Also, despite the optimistic narrative that young Japanese attitudes towards work are changing, job-hopping remains relatively low and the desire for stable employment core. A visible smattering of surplus-to-requirement staff, in times of tight labour markets and economic ferocity, are like feathers on a peacock: a needlessly extravagant, and thus alluring, encumbrance.

And, on the flip side, hatarakanai ojisan may be a secret shield against takeover. Increasingly, say analysts, domestic M&A in Japan will be driven by labour shortages as the job market reaches what CLSA strategist Nicholas Smith calls a “singularity” in which there are no more people outside the job market for companies to target — and when the best option for some may be to buy staff wholesale through hostile M&A. Hatarakanai ojisan’s unsackable uselessness, when the due diligence survey catches him coming back from his sixth smoking break, makes a fine poison pill.

These twinkles of benefit aside, however, the Shikigaku report paints a dark picture. Towards the end, young respondents were asked if they thought they themselves could become a hatarakanai ojisan in the future. An unsettling 30.3 per cent said that they might if salaries continued to be based on seniority rather than results. The bamboo that bends, as the Japanese saying goes, is stronger than the oak that resists.