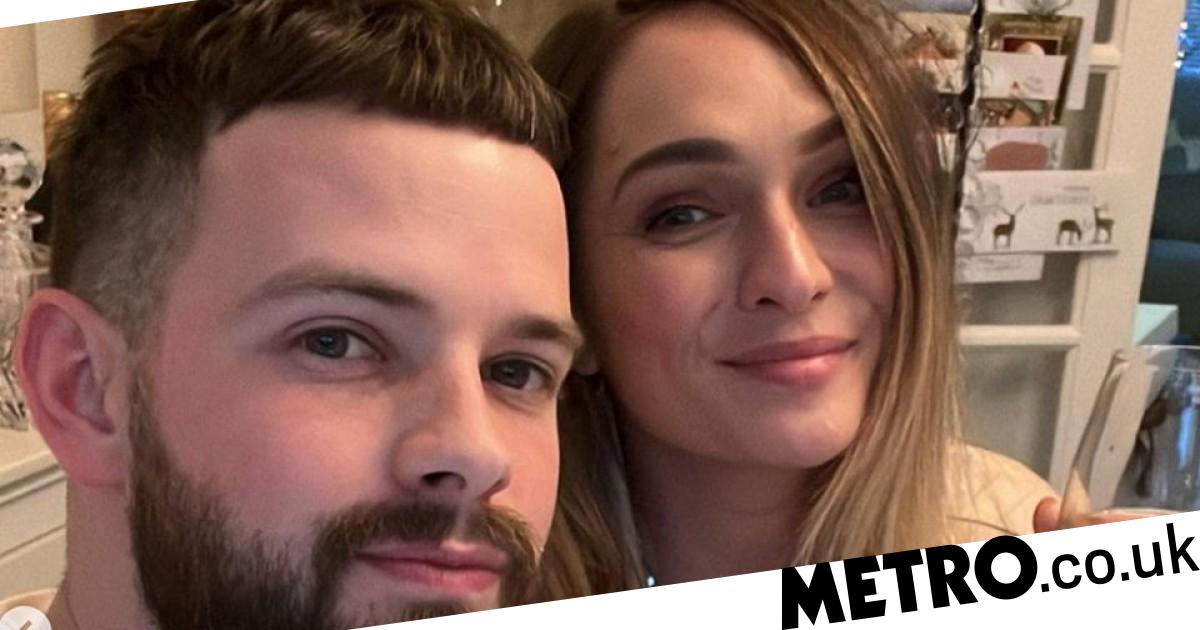 The family of Dani Hampson have paid tribute to their daughter and sister after her sudden death on the day she was meant to marry X Factor star Tom Mann.

Mum-of-one Hampson, 34, had been due to marry former Stereo Kicks star Mann on Saturday, June 18, but died in the early hours of the morning.

Her heartbroken fiance broke the news on Monday with a devastating tribute on social media, saying that while they never married he will ‘wear this ring that I was always supposed to wear as a sign of my unconditional love to you.’

Now Hampson’s father and siblings have shared their devastation at losing the ‘beating heart’ of their family.

Her father, Martin, took to social media where he paid tribute to the ‘loving, successful, intelligent daughter who always put everybody before herself, and as a result was loved by everyone.’

He wrote:’She will always be my little princess, the love of mums life, the sister Andy adored, Helenas BFF, Tom’s true love, and of course Bowies amazing mummy (sic).’

‘We are all devastated and utterly heartbroken,’ he went on. ‘People say the hurt will ease in time, but as it stands we are broken.’

Her brother, Andy, shared a sweet black-and-white snap of him and his sister on a night out and said he wanted to take the opportunity ‘to express just what Danielle meant to me and the void she is going to leave in all our lives.’

‘For as long as I can remember Danielle has been my best friend. I took great pleasure in taking the mick out of her at every opportunity and she reciprocated, but the love we had for each other was immeasurable.’

He recalled how they got on ‘perfectly’ aside from the ‘very occasional brother and sister tiff,’ and said she filled him with ‘so much pride it made me want to burst.’

Andy went on to promise his sister that ‘the world will know just what an extraordinary human being Bowie’s mum was.’

‘The outpouring of love we have already witnessed is a testament to the wonderful person you were,’ he added.

‘I wish we could have just one last hug, drink, laugh together and I could have the opportunity to tell you, you were everything to me.

‘I will love you forever, my beautiful sister.’

Hampson’s sister-in-law, Helena Smith, also shared a gorgeous black-and-white snap of the pair together, and wrote that she would ‘love and miss [her] forever.’

She had ‘so much life left to live with both Tom and Bowie,’ Smith penned on Instagram.

‘Danielle, Tom, Andy and I had something so special. We were so close, we made so many memories. I always felt so lucky I had that kind of relationship. Not many people do.’

Smith recalled how Hampson and Mann’s wedding had been postponed twice, and June 18 was her own birthday: ‘Even though it should have been all about her, she still made plans around her own wedding weekend to celebrate me too.’

‘I can never thank her enough for her selflessness and always, always putting other people first, even when she didn’t have to. This day will forever now be a celebration of you,’ she wrote.

Her heartbroken BFF went on: ‘I looked up to you since the moment I met you Danielle, the big sister I never had and never knew I needed, a best friend.

‘You taught me so much and I promise to use what I’ve learnt from you throughout the rest of my life, and to be there for Bowie always, I’m so happy I get to be his Auntie.’

Fiance Mann, best-known for his appearance on the X Factor in 2014 where he was one of eight members of boyband Stereo Kicks, had described Hampson as his ‘best friend, my everything and more, the love of my life.’

Pouring his heart out in the Instagram caption for a picture of his partner and their baby, he continued: ‘On what was supposed to be the happiest day of our lives ended in irreversible heartbreak. I feel like I have cried an ocean.’

He promised he would ‘use any strength I can muster for our little boy,’ despite feeling he will ‘not be a mark’ on the parent that Dani was.

‘I promise I will do my everything to raise Bowie just the way we always wanted. I promise you he will know how amazing his mummy was.

‘I promise to make you so so proud.’