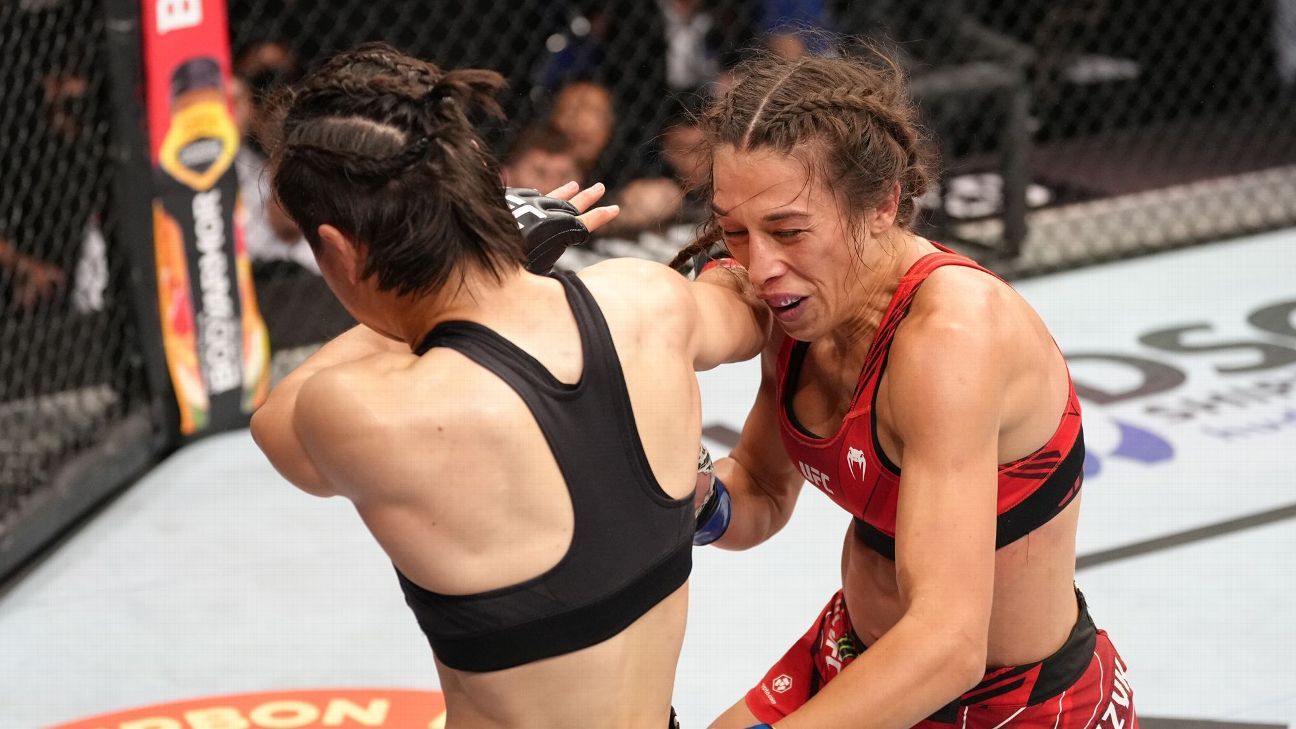 The bar had been set sky-high, yet Zhang Weili again reached for the stars.

Two years after she and fellow former UFC strawweight champion Joanna Jedrzejczyk engaged in what many consider the greatest fight in women’s MMA history, the two had another classic slugfest at UFC 275 on Saturday in Singapore. This one lasted only 2 minutes, 28 seconds into Round 2 before Zhang used a spinning backfist to knock out Jedrzejczyk, who announced her retirement right afterward.

“I’m very, very happy for this fight,” Zhang said through an interpreter. “I told myself I would use all of my aspects to beat my opponent, and I did it.”

Indeed, Zhang (22-3) scored three takedowns in the first round after getting just one in the 25-minute first fight. Once she had Jedrzejczyk on the canvas, the 32-year-old from China punished her opponent with several elbows to the head. Jedrzejczyk survived to Round 2, but midway through, she fell face-first to the canvas after absorbing the spinning attack from Zhang.

Afterward, a tearful Jedrzejczyk (16-5), who reigned as champ from 2015 to 2017, placed her gloves at the center of the cage and announced she was finished fighting. “I’m turning 35 this year,” she said. “I want to be a mom. I want to be a businesswoman.”

Zhang ended a two-fight losing streak against Rose Namajunas, who took away the 115-pound title belt in April 2021 and won the rematch a little over six months later.

Although the UFC did not bill Saturday’s fight as a title eliminator, Zhang performed impressively enough to earn her a shot at champion Carla Esparza, whom she called out, targeting UFC 281 on Oct. 22 in Abu Dhabi, United Arab Emirates.

“It’s not your territory; it’s not my territory,” Zhang said. “Let’s meet in Abu Dhabi and fight together in a very balanced place.”

Valentina Shevchenko defended her flyweight championship for the seventh time at UFC 275 on Saturday in Singapore — but in doing so, her aura of invincibility might have taken a hit.

“When you’ve finished a fight, every time you find something to improve,” Shevchenko said. “This is the championship mindset. Every time, you go farther and farther. I did everything. I left my heart in this Octagon. I can tell everyone, fans of MMA, I left my heart in here.”

A sizable betting favorite, Shevchenko faced adversity from the first round. She made a mistake in an early clinch when she gave up her back during a takedown attempt along the fence. Santos, 28, capitalized on the error by locking in a body triangle. She threatened Shevchenko with several rear-naked choke attempts, but Shevchenko showed good defense.

The fight remained ultracompetitive in the second and third rounds as Santos scored multiple takedowns and showed good grappling ability in the scrambles. Throughout the fight, she racked up 8:49 of control time, but her offense was limited in those positions. Shevchenko landed more offensive strikes, but Santos’ ability to control positions was surprising, given Shevchenko’s usual dominance there.

In the fourth round, Santos’ right eye nearly swelled shut due to an accidental clash of heads on the feet. The swelling bothered Santos a little, and she also appeared somewhat fatigued in the later rounds. Shevchenko started to land heavier combinations and secured a crucial takedown in the fifth round to seal the victory.

Matthews was just 19 years old when he debuted in the UFC. At the time, he was the youngest fighter on the roster and one of the top prospects coming out of Australia.

There have been ups and downs for Matthews, peaks and valleys. But after eight years in the UFC, the still-not-30-year-old Aussie might have put together the best performance of his career. Matthews pummeled Fialho on his way to a knockout at 2:24 of the second round.

“I’ve had this sort of skill level my entire career,” Matthews said in his postfight interview. “Thank God we were able to bring it to the fight this time. Everything you’ve seen from me before this fight was 50% of Jake Matthews. So get used to seeing that.”

The action picked up near the end of the first round, with big exchanges landing from both men. Fialho then hit Matthews with a stiff right hand, and Matthews countered with a huge combination that hurt Fialho. In the second round, Matthews poured it on. He landed a hard left hook, followed by another left that staggered Fialho.

Matthews then hit an uppercut, a winging right hook and an overhand right over the top of a Fialho left on a counter. With Fialho trapped against the cage, Matthews landed another left hook that wobbled Fialho and then a combination that put Fialho down, leading to the finish. Afterward, Matthews said he’d like to fight at the UFC’s first-ever show in Paris in September.

Matthews, 27, has won four of his last five fights, losing only to the surging Sean Brady during that time. “The Celtic Kid” debuted in the UFC in June 2014 as a teenager, just his eighth pro fight. He has an 11-5 UFC record now.

Fialho, a 28-year-old Portugese fighter, had a two-fight winning streak snapped. He has already fought four times this year after signing with the UFC in January.

Della Maddalena delivered an exceptional encore to his UFC debut in January, as he knocked out Emeev with a left hook to the body at 2:32 of the opening round to improve to 2-0 with the promotion.

The 25-year-old prospect from Perth, Australia — who knocked out Pete Rodriguez with a left hook in less than three minutes in January — folded Emeev with a well-placed shot to the liver up against the fence. Referee John Sharp gave Emeev a moment to recover, but it was quickly evident that Emeev had no interest in continuing. The official result was a first-round TKO.

Ten of Della Maddalena’s 12 career wins have come via knockout. He has won 12 in a row after starting his professional career 0-2.

Culibao scored a first-round knockout. (Almost.) He had a second-round KO. (Practically.) He got choked out in Round 3. (Nearly.) In an all-action fight with several dangerous moments for each man, the 28-year-old Australian went the distance to earn a narrow win.

Culibao dropped and badly hurt Choi in the first two rounds, but the South Korean survived and even landed damaging blows late in the first round and was himself briefly chasing a finish. Then, in Round 3, Choi scored a takedown, seized back control and threatened with a rear-naked choke. But Culibao defended well.

All three judges scored the bout 29-28, with two giving it to Culibao, who won his second in a row after a loss and draw had marred his perfect record.

Who needs two names when you have power in your hands like Maheshate?

The top Chinese prospect turned Garcia’s lights off with a massive right hand, resulting in a knockout victory at 1:14 of the first round. With Garcia coming forward recklessly, Maheshate guided a straight right to his jaw and Garcia faceplanted, unconscious on impact.

“Like I said in my prefight interviews, I will use my overhand right to finish the fight,” Maheshate said. “And I did it.”

Garcia actually landed a big combination that hurt Maheshate in the opening seconds, but Garcia might have tried a bit too hard to follow up. He came forward and Maheshate dropped him with a right hand. Garcia recovered but pushed ahead with some missed punches carelessly — and Maheshate made him pay. The second time, Garcia did not get up.

Maheshate, 22, is the third-youngest fighter on the roster and the youngest lightweight in the UFC. He was the first Chinese fighter to earn a UFC contract from Dana White’s Contender Series, beating Achilles Estremadura last November. A 30-year-old from New Mexico, Garcia has dropped two of three in the UFC.

Allen, 26, narrowly avoided an upset loss at the hands of Australia’s Malkoun, but ultimately managed to churn out a decision win behind unanimous 29-28 judges’ scorecards.

Malkoun had tremendous success with the single-leg takedown and became the first fighter in UFC middleweight history to record at least six takedowns in three consecutive fights. He took Allen down in every round of the fight, although he also struggled to land any real offense from those positions. Allen reversed position on Malkoun several times and landed some strong elbows from the top position — particularly in the third round.

That was likely the difference in the scores. According to UFC stats, Malkoun banked over seven minutes of control time in the fight — compared with 3:24 of control for Allen — but Allen landed more than double the total strikes.

“I felt I was more active and I was trying to hurt him,” Allen said. “He was just hugging every time.”

Since 2019, Allen has recorded six wins in the UFC. Only reigning champion Israel Adesanya and Kevin Holland have recorded more (7) in the division during that time.

Kang’s nickname is “Mr. Perfect,” and the only question is whether it is an homage to his piston jab or his relentless leg kicks. Both marked up and slowed down Danaa significantly as Kang pulled away for a clear decision (29-28 on all three cards).

Kang, 34 and from South Korea, controlled distance throughout and weathered Danaa’s powerful attacks. Kang, who also had to deal with referee Thomas Fann essentially ignoring what appeared to be an illegal knee by Danaa in Round 2, has won four of his last five fights.

Danaa, a 32-year-old from Mongolia who trains at Jackson Wink MMA in Albuquerque, New Mexico, fought well early but was slowed by his opponent’s crisp and consistent attacks. He became desperate later on, flinging powerful shots that Kang could quickly evade as Danaa lost his second in a row.

Maheshate sends Steve Garcia to the canvas with just one punch at UFC 275.

Gomez Juarez might have been fighting for her job, as she was winless coming in this weekend. She saved her spot on the UFC roster in about as emphatic a way as possible.

Gomez Juarez blasted Na with massive punches, putting her to sleep for a knockout victory at 1:22 of the first round. It was Gomez Juarez’s first UFC victory. Gomez Juarez landed an overhand right that put Na on her butt. Na got up, and Gomez landed a left hook that put Na down for good. Referee Steve Perceval quickly stepped in.

“So happy,” Gomez Juarez. “I dreamed about it. I visualized it.”

Gomez Juarez, 37, snapped a two-fight UFC losing streak. The Argentina-born fighter, who lives and trains in Tijuana, Mexico, is a 12-year pro who has fought in places like Poland, Brazil and Mexico before getting a shot at the UFC. Na, a 25-year-old from China, has dropped two in a row and is still looking for her first UFC win.

Panama’s Edwards picked up her second win inside the Octagon, behind a solid three-round effort over Pascual. Edwards defended all but one of Pascual’s takedown attempts, maintained distance on the feet and went to work with her superior kickboxing en route to judges’ scores of 30-27, 29-28 and 29-28. According to UFC Stats, Edwards out-landed Pascual in total strikes, 150 to 64.

Pascual did have a moment in the opening round when she hurt Edwards with a left kick to the body, followed by a left head kick. Edwards survived, however, and went on to dominate the second and third rounds. She never had Pascual hurt, but she expertly dictated range and landed front kicks to the body and leg kicks at will. She improved to 2-2 in the UFC with the win. This was her first UFC appearance at 145 pounds. Her previous three took place in the 135-pound bantamweight division.