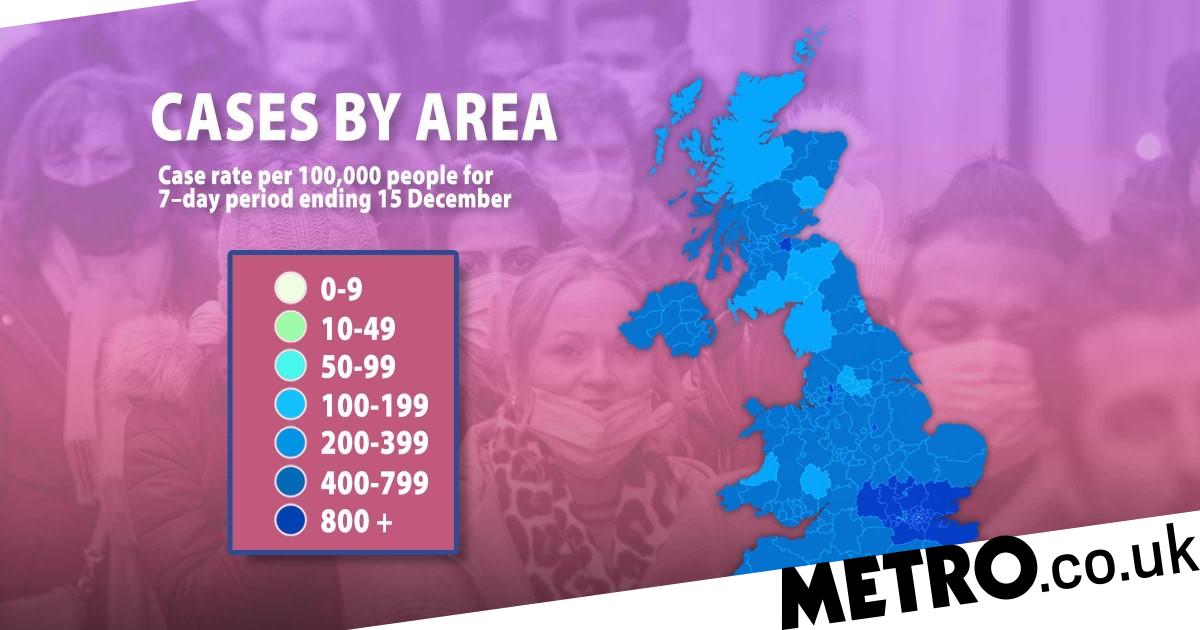 Record levels of Covid infections, a return of restrictions and European neighbours going back into lockdown has made for some bleak reading this winter.

The rapid spread of the Omicron variant has caused a great deal of unease, with Boris Johnson refusing to rule out new measures right after Christmas.

Grim government modelling last week suggested the highly-transmissible strain was doubling every two days and was infected up to 400,000 people per day by the weekend.

But there is some good news, as general Covid cases have plateaued in the UK for six days now, having hit a peak of more than 93,000 on Friday.

And Professor Paul Hunter, a leading infectious diseases expert at the University of East Anglia, suggests the wave of Omicron cases may have already peaked.

He said the Prime Minister may have made the right decision not to bring in tougher restrictions before Christmas may have been the right call after all.

The Omicron wave in London – an epicentre for the variant – also appears to be slowing, with 20,491 cases were recorded in the capital yesterday, compared to 22,750 the day before.

Professor Hunter told MailOnline: ‘It’s not all doom and gloom, it does look like Omicron has stopped growing. The numbers over the last few days seem to have plateaued and maybe even be falling.

‘It’s a bit too soon to be absolutely sure about that, but if it is the case Boris Johnson will breathe a sigh of relief. We have to be a little bit careful because it’s only a few days.

‘And because we’re getting closer to Christmas there is nervousness that people may not come forward for testing because they don’t want to test positive and miss out on meeting relatives.’

Seeing as Omicron overtook other variants in the country around December 14, Professor Hunter says it would have been the main driver of new cases from then on.

If it was still doubling every two days, Professor Hunter says we should have been at more than 200,000 cases yesterday.

He said that the fact that it has been around the 91,000 mark suggests it ‘might have actually peaked’.

‘But it will probably take until at least Wednesday to get an idea of a day that is not affected by the weekend. But I am more optimistic than I was a few days ago.’ Professor Hunter added.

The middle of the working week tends to be when daily cases peak, as a backlog of weekend data is added to the count.

While there were 1.49 tests carried out yesterday compared to 1.56million last Wednesday, he says the ‘relatively small drop’ wouldn’t hide a virus doubling every two days.

Professor Alastair Grant, shares his colleague at the University of East Anglia’s assessment. He said he was ‘certainly less pessimistic’ than he was on Sunday about the spread of the new variant.

Yesterday he told the Eastern Daily Press: ‘It looks like that exponential growth of Omicron is starting to decline.t

‘Unless there’s something very radical [that’s] happened to the data, I think we will see the number’s plateauing over the next one or two days, and we may even start to see numbers declining.’

However, both scientists said that while cases may be peaking, the impact Omicron will have on hospitalisations is less clear.

As pointed out recently by England’s Chief Medical Officer, Professor Chris Whitty, the faster a wave rises, the more quickly and dramatically it is likely to drop.

It’s clear people are already taking precautions, while many others are gaining immunity from either booster jabs or Omicron infection. Within three weeks of the strain emerging in South Africa, cases had started to decline.

Speaking to the Commons Health and Social Care Committee on Thursday, Professor Whitty said: ‘I think what we will see with this, and I think we are seeing it in South Africa is that the upswing will be incredibly fast even if people are taking more cautious actions – as they are – that will help slow it down, but it is still going to be very fast.

‘It will probably peak really quite fast and my anticipation is it may come down faster than previous peaks, but I wouldn’t want to say that for sure.

‘In terms of where we are going over the next few weeks, the rate of increase is going to be quite impressive.’

Director of the Rosalind Franklin Institute, Professor James Naismith, said there was always a danger of being overly optimistic and acting too late.

However, he told Telegraph: ’If it turns out to be mild, then acting too quickly will be seen to have damaged livelihoods for no reason.

‘This will damage the economy and, in time, public services. I do think it would help if the debate emphasised the uncertainty alongside the risk of acting too late.’