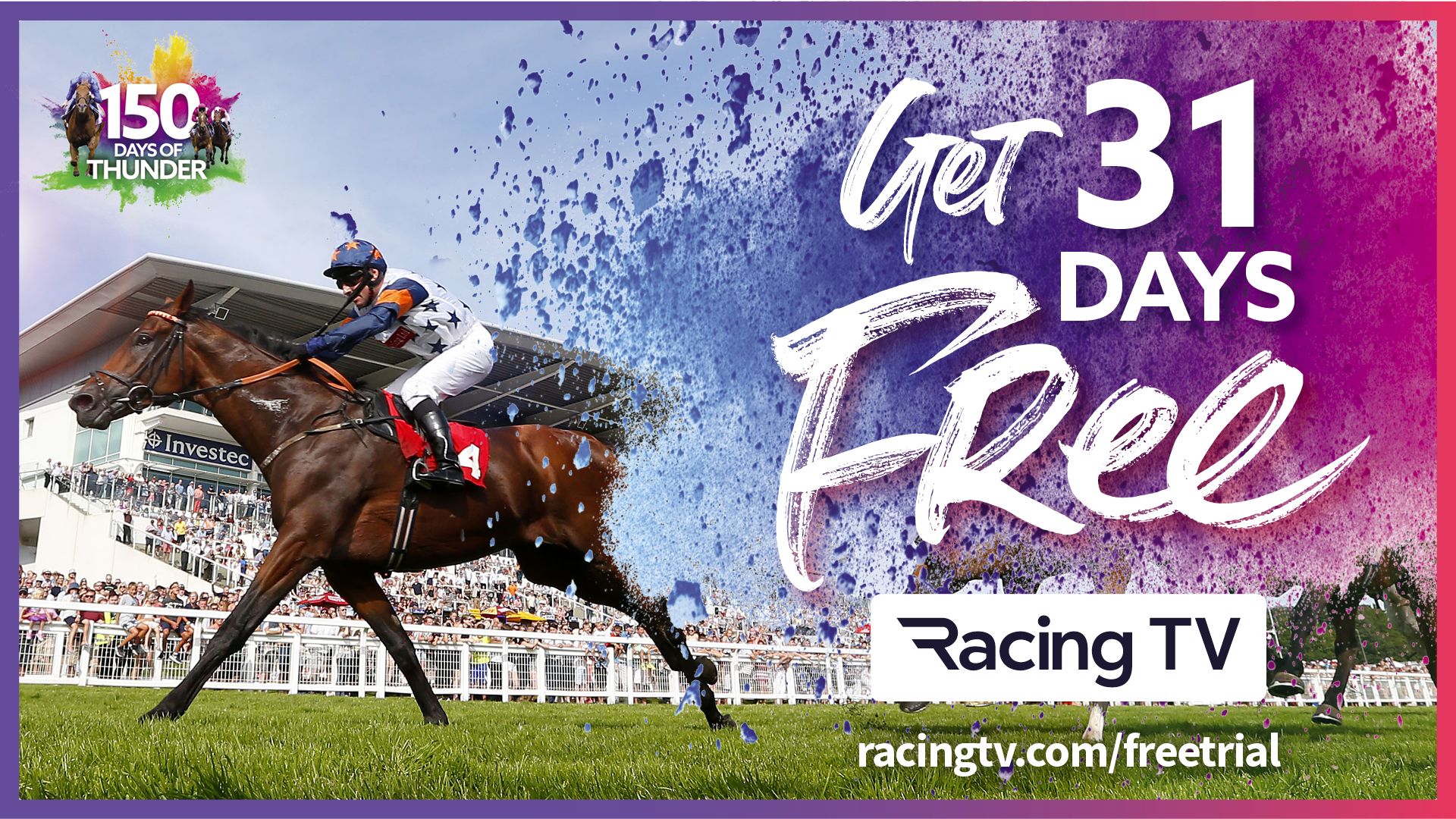 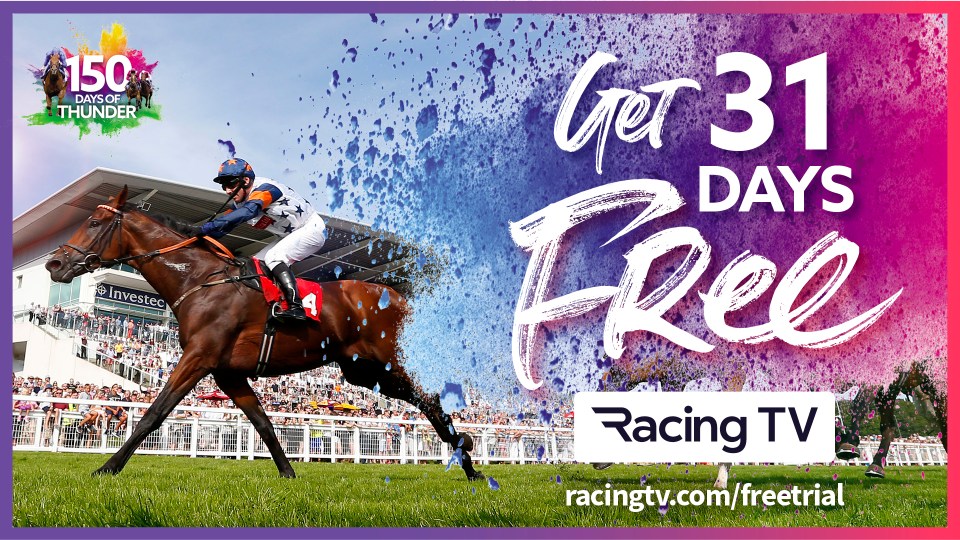 talkSPORT has teamed up with Racing TV to give you the chance of winning an epic prize of a 50 inch television plus a year’s subscription to Racing TV!

Racing TV are offering all new and returning customers a free one-month trial of the channel. This means you don’t need to miss a moment this summer from 62 British and Irish racecourses. You can enjoy your free month on TV, online and mobile. This is a limited time offer, start your free trial here.

Please note that by entering this competition you consent to having your details used in accordance with the Wireless Privacy Policy and your data will be used to contact you in case you are selected as the winner.

WIN! A 50″ TV AND A YEAR’S RACING TV MEMBERSHIP! (THE “PROMOTION”) ONLINE RULES:

Participation in the Promotion

1. Residents of the United Kingdom aged 18 or over only, except employees and agents of the Promoter or Wireless Group Limited and anyone otherwise connected with the operation or fulfilment of the Promotion (including third party sponsors or promotional partners) and their respective associated, affiliated or subsidiary companies, and the immediate families and household members of all such employees and agents.

2. Anyone who has won a prize for any Promotion run by participating radio stations in the Wireless network in the 12 months preceding the end of the Promotion Period is not eligible to enter.

4. Participants may make a maximum of 1 entry per person per race day during the Promotion Period.

5. To enter you must complete and submit the entry form available at http://www.talksport.com/competitions during the Promotion Period only.

6. Entries received which are not submitted via the official entry method will not be accepted. Use of script, macro or any automated system to enter the Promotion is prohibited and entries made (or which appear to have been made) using any such system may be treated as void.  Any illegible, incomplete or fraudulent entries will be rejected.

7. Participants should be aware that they may be subject to data charges depending on their own individual arrangements for internet access if they enter the Promotion online or by email.

9. The winner will be selected at random from all valid entries for this Promotion received during the Promotion Period. There will be no prizes for any other participants.

10. The prize is a 50″ TV and a one year subscription to Racing TV that can be watched across TV, online and mobile.

11. Prizes are as stated and are non-exchangeable and non-transferable. There is no cash or other alternative to the prize in whole or in part.

12. The winner is responsible for paying all associated costs that are not specifically stated in any Promotional materials or these Terms and Conditions, including (where applicable) transport, parking, accommodation, meal costs, spending money, insurance and all other incidentals.  Winners are also personally responsible for any personal or incidental expenses and any VAT, national and/or local tax liabilities incurred in claiming or using the prize.  By participating in the Promotion, participants agree that the prize is awarded on an “as is” basis, and that neither the Promoter nor any of its subsidiary or affiliated companies, make any representations or warranties of any nature with respect to the prize.

Winner Announcement and claiming of prize

14. Winners will be notified by phone or using the other contact details provided to the Promoter. All reasonable endeavours will be made to contact the winner during the specified time.  If a winner cannot be contacted or is not available, the Promoter reserves the right to re-draw another winner from the valid/correct entries that were received during the Promotion Period. Winners may be required to submit valid identification before receiving their prize.

15. Winners will be required to confirm acceptance of the applicable prize within 48 hours. If the winner has not claimed their prize by the date specified or the winner refuses or is unable to provide an eligible postal address for receipt of their prize, the Promoter reserves the right to award the prize to another participant.

16. For a list of winners (name and general location) please send a stamped self-addressed envelope by no later than 28 days after the end of the Promotion Period to the Promoter at: Promotions Department, Wireless Group Limited, 1 London Bridge Street, SE1 9GF stating that you would like the winner details for the “Racing TV” Promotion.

17. The Promoter will collect and process participants’ personal information and it will be shared with the Promoter’s agents, affiliates and, if applicable, any third party prize provider (including those outside the European Economic Area). Information provided by participants will only be used for the purpose of conducting this Promotion (including for prizes to be delivered) and other purposes as may be specified at the time of entry or on promotional materials. Personal information will be used in accordance with the applicable privacy policy in place from time to time (see http://www.newsprivacy.co.uk/single/).

18. Participants’ names and general locations will be published or made publicly available if they are a winner of the Promotion in accordance with the regulatory requirements. In such circumstances we may also make free use of this information and participant’s photographs for publicity purposes both during this and future promotions by the Promoter or any of its associated or subsidiary companies.

19. The Promoter’s decision is final and binding on the participants. No correspondence will be entered into.

20. If participants do not provide any of the mandatory information requested when participating in the Promotion, their entry will be void.

22. The provision of the prize does not imply endorsement by the Promoter of Racing TV or other third parties concerned in any way with the Promotion. Any complaints or queries relating to the use of the prize should be directed to Racing TV.

23. Participants must not do anything illegal and/or dangerous and/or that would put themselves or others at any risk.  Save where it has been negligent, the Promoter will not be responsible for any damage, loss or injury resulting from participants’ entry into the Promotion or their acceptance and/or use of the prize, or for technical, hardware or software failures, lost, faulty or unavailable network connections or difficulties of any kind that may limit or prohibit participant’s ability to participate in the Promotion.  The Promoter will not be responsible for any lost, damaged, delayed, defaced, incomplete, illegible or otherwise unreadable entries. Proof of making a phone call, sending an entry by post, email or text, is not proof of receipt by the Promoter of any entries.  Nothing in these Terms and Conditions shall in any way limit the Promoter’s liability for death or personal injury caused by its negligence or for any other matter where liability may not be limited as a matter of law.

24. The Promoter reserves the right at any time to cancel, modify or supersede the Promotion (including altering prizes) if, in its sole discretion, the Promotion is not capable of being conducted as specified. In the event of a printing or other error resulting in there being more winners than prizes for the Promotion, the Promoter reserves the right to (a) declare as void any claims or entries resulting from such printing or other error; and/or (b) allocate the available prize(s) through a further draw or to divide the prize(s) or the value of the prize(s) between the winners of the Promotion.

28. The promoter of this Promotion is Wireless Group Limited (operator of participating radio stations in the Wireless network) of 1 London Bridge Street, SE1 9GF. (the “Promoter”).